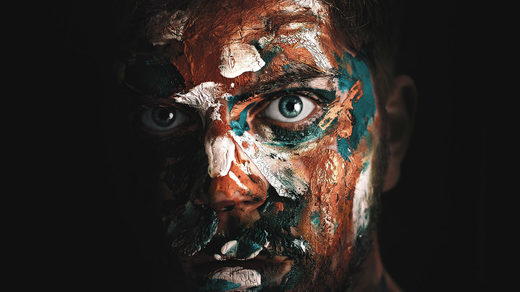 They say you should never meet your heroes. There’s plenty of reasons why, but in the case of your creative heroes, it might be because they’re jerks.

The idea of the “cantankerous creative” has likely been around since the first arrogant caveman learned to make fire. Pablo Picasso carried around a revolver loaded with blanks that he’d fire at people he disliked. H.P. Lovecraft was a staggering racist, even for his time. Thomas Edison happily electrocuted an elephant to discredit his rival, Nikola Tesla. It seems like creative people – whether gifted in the visual arts, science, writing, or what have you – are often thoroughly unpleasant people.

While creative success may make one bigheaded, an emerging stream of research is showing that creativity and being a real jerk may actually have a more intimate relationship. In fact, for some people, being a bit of a psychopath might nudge one toward creative success.

One study in particular has shed light on the link between creativity and psychopathy. Published in Personality and Individual Differences, in the spring of 2017, A.J.R. Galang’s study looked at creative success and how it matched up with the so-called Dark Triad of personality traits: narcissism, Machiavellianism, and psychopathy.

Participants were instructed to indicate how much they agreed with a given statement presented over a series of surveys designed to measure both creative achievements (with statements like “My work has been critiqued in a national publication”) and Dark Triad personalities (with statements like “Payback needs to be quick and nasty”). Galang found that creative achievement in a variety of arts, ranging from creative writing to the culinary arts, was consistently associated with higher narcissism and psychopathy.

Prior evidence showed that narcissists tended to inflate their successes on such questionnaires, but, as Galang writes,

The finding for psychopathy is much more interesting […] People with tendencies towards psychopathy would have less reason than narcissists to falsely portray themselves as creative. Therefore, it is reasonable to suspect that this association might imply a substantial link between trait psychopathy and creativity.

Where psychopathy and creativity overlap

Based on these findings, Galang dug more deeply into the link between psychopathy and creativity. One model of psychopathy breaks the trait down into three broad categories: boldness, meanness, and disinhibition. Psychopaths don’t experience fear and stress very much (boldness), are often aggressive and lacking in empathy (meanness), and behave impulsively (disinhibition). Galang surveyed a new sample, again measuring participants’ creative achievements in various fields of art in addition to measuring their boldness, meanness, and disinhibition.

The findings were clear. Most artists tended to score high in psychopathic boldness, which Galang characterized as a “kind of emotional disinhibition that should be associated with less restricted decision-making […] and creative ideation.” This is in contrast to psychopathic disinhibition, which is “mostly associated with problems with control and aggression, and also with negative affect.”

Although these findings held up across the board of artistic disciplines, there were a few interesting outliers. Successful architects scored high in boldness, meanness, and disinhibition. In the first survey, they also scored highly in Machiavellianism, narcissism, and psychopathy. So, maybe don’t invite any architects to your next dinner party. Creative writing was negatively associated with meanness and disinhibition but scored highly in boldness, and comedians were both strikingly bold and mean.

But so far, this research relied on self-reports of creativity or psychopathic tendencies. Based on the idea that creative people are emotionally disinhibited in much the same way as psychopaths, Galang recruited some participants to perform the Iowa Gambling Task – a common cognitive test designed to measure risk-taking and decision-making – while measuring skin conductance responses, which spike in response psychological stress and anxiety.

After completing the task, participants were asked to perform two divergent-thinking tasks designed to approximate general creativity. The first was to come up with as many uses for a bottle as possible, and the second was to consider the consequences of a scenario where people no longer needed to sleep.

The responses were then graded for their creativity by different researchers. For instance, some highly creative responses to no longer needing to sleep where that moon bathing would become a fad or that Santa Claus would be caught in the act on Christmas. Those individuals who felt little or no stress in the gambling task tended to perform better creatively.

What does this mean?

Together, this research provides evidence for what Galang calls the “prosocial psychopath model of creativity.” Many (but not all) highly creative people tend to have personality traits similar to those of psychopaths. Their emotional disinhibition expresses itself in striking works of art as well as rude remarks (or in Picasso’s case, firing pistols at people). At the same time prosocial psychopaths aren’t quite so mean or impulsive as a true psychopath; hence, they are “prosocial.” Success in art may, in some cases, be due to boldness bordering on psychopathy.