What’s in a name? The surprising ways your name affects your life 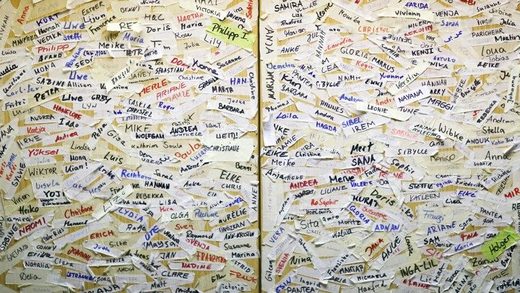 What’s in a name? The surprising ways your name affects your life

From dating to job prospects, a name has remarkable power over the path of its owner’s life.

I was at a party for Bastille Day in Paris a few years back, and we were leaning over the balcony to watch the fireworks. A cute French girl sat next to me, but after a few flirty glances the moment was entirely ruined with the most basic of interactions: “What’s your name?” she asked in French. “Cody,” I said.

That was it. We were done. “Co-zee?” she said, sounding out the entirely foreign name, looking more disgruntled with each try. “Col-bee?” “Cot-ee?”

I tried a quick correction, but I probably should’ve just lied, said my name was Thomas or Pierre like I did whenever I ordered take-away or made restaurant reservations. Not being able to pronounce a name spells a death sentence for relationships. That’s because the ability to pronounce someone’s name is directly related to how close you feel to that person. Our brains tend to believe that if something is difficult to understand, it must also be high-risk.

In fact, companies with names that are simple and easy to pronounce see significantly higher investments than more complexly named stocks, especially just after their initial public offerings when information on the stock’s fundamentals are most scarce. People with easier to pronounce names are also judged more positively and tend to be hired and promoted more often than their more obscurely named peers.

There are more variables at play than just pronunciation, though. In competitive fields that have classically been dominated by men, such as law and engineering, women with sexually ambiguous names tend to be more successful. This effect is known as the Portia Hypothesis (named for the heroine of Shakespeare’s The Merchant of Venice who disguises herself as a lawyer’s apprentice and takes on the name Balthazar to save the titular merchant, Antonio). A study found that female lawyers with more masculine names – such as Barney, Dale, Leslie, Jan, and Rudell – tend to have better chances of winning judgeships than their more effeminately named female peers. All else being equal, changing a candidate’s name from Sue to Cameron tripled a candidate’s likelihood of becoming a judge; a change from Sue to Bruce quintupled it.

Names work hard: They can affect who gets into elite schools, what jobs we apply for, and who gets hired. Our names can even influence what cities we live in, who we befriend, and what products we buy since, we’re attracted to things and places that share similarities to our names.

A name is, after all, perhaps the most important identifier of a person. Most decisions are made in about three to four seconds of meeting someone, and this “thin-slicing” is surprisingly accurate. Something as packed full of clues as a name tends to lead to all sorts of assumptions and expectations about a person, often before any face-to-face interaction has taken place. A first name can imply race, age, socioeconomic status, and sometimes religion, so it’s an easy – or lazy – way to judge someone’s background, character, and intelligence.

On this year’s French baccalaureate, an exam that determines university placement for high school students, test-takers named Thomas (for boys) and Marie (for girls) tended to score highest. These are, you will note, typically white, French, middle- or upper-class names. One could imagine these students were given the advantage of high expectations and self-perception, whether or not they had the money and support that comes with the socioeconomic background associated with those names.

People change their names for different reasons. Angelina Voight became Jolie to estrange herself from her father and Natalie Hershlag became Portman to maintain her family’s privacy. The inclusion of a middle initial in formal correspondence is a strong identifier of intelligence (even though the New York Times claims it’s a dying trend). But what if parents from disadvantaged circumstances gave their children “advantaged” names? Could just a name really have that great of an effect on a person’s career and future?

A 2004 study showed that all else being equal, employers selected candidates with names like Emily Walsh and Greg Baker for callbacks almost 50 percent more often than candidates with names like Lakisha Washington and Jamal Jones. Work experience was controlled and the candidates never met face-to-face with the employer so all that was being tested was the effect of the candidate’s name. The researchers concluded that there was a great advantage to having a white-sounding name, so much so that having a white-sounding name is worth about eight years of work experience. “Jamal” would have to work in an industry for eight years longer than “Greg” for them to have equal chances of being hired, even if Jamal came from a privileged background and Greg from an underprivileged one. (Perhaps that’s why mega-celebrities can get away with giving their children peculiar names. A résumé with the name North West probably wouldn’t do as well as James Williamson – unless Papa Kanye called up the boss.)

After the girl at the party had so much trouble saying my name, I asked what her name was. “Edwige,” she said. It’s a lovely name, very French, but it is also pronounced the exact same way as “Hedwige,” which just so happens to be the French version of Hedwig, the owl in Harry Potter. “Don’t make fun,” she said, and I didn’t. But neither did we talk very much for the rest of the night. But still, I wonder what would’ve happened if I had been a Pierre and she a Marion. Perhaps we would’ve gotten along quite well that night, perhaps we would’ve quickly trusted each other. Perhaps I’d have a date this weekend.

Cody C. Delistraty is a writer and historian based in Paris. He has worked for the Council on Foreign Relations, UNESCO, and NBC News.