Happy hormones: Goat yoga – the greatest of all time or a passing fad? 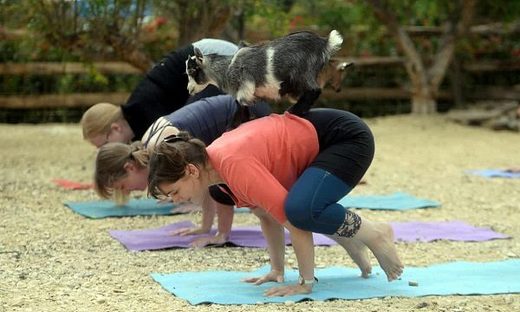 Happy hormones: Goat yoga – the greatest of all time or a passing fad?

Not everyone is enthusiastic about the new trend. Sara Teiger has been practicing iyengar yoga – a more traditional branch of yoga – for 15 years and thinks goat yoga will be a pointless fad. “It’s not about the exercise or the metal health benefits, it’s just about the social media that gets generated afterwards,” Teiger says. “I’m doing a downward dog and I’ve got a goat on my arse, but so what? You’re not going to find someone who goes twice a week before work.”

Teiger also says she is concerned about the welfare of the goats and that they are being used as a prop for people’s amusement. McCheyne insists the goats participate willingly. “We don’t bribe them, we don’t pick them up and place them on our bodies or anything, but if they’re interested, they’ll come by and have a sniff or a little bit of a nibble. They might chew your hair or your yoga mat. And they’ll just come around for a cuddle, really,” McCheyne adds.

Marie Spreckley, the owner of London Weightloss Clinic and a teacher of barre (a combination of yoga, dance and pilates), does not think the trend is conducive to the purpose of yoga. “Yoga is all about mindfulness, relaxation and concentration. You can’t do it while having an erratic animal around. In addition to that you might injure yourself, because yoga is all about posture and flexibility.”

While Cowan acknowledges that goat yoga will be a passing fancy for most, she loves the idea of it. “You’re just going to be laughing and smiling all the way through. So, I don’t think it’s going to take you to a specifically internal zen calm, but I think through positive connecting hormones, you’re going to come out of it feeling absolutely fantastic. I really want to have a go.”