Daily Mail runs hysterical hit piece on Mikhaila Peterson: “How fake food news is putting us all at risk” 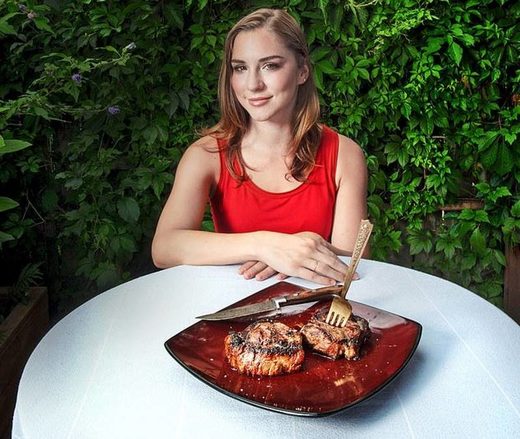 Daily Mail runs hysterical hit piece on Mikhaila Peterson: “How fake food news is putting us all at risk”

Pedlars of fake food news: Are Gwyneth Paltrow and a Canadian mother of one who claims to cure arthritis by an all-beef diet ‘putting us all at risk’?

Carrot juice that cures cancer, deadly sweeteners in a can of Coke, and a girl who claims the key to beating arthritis is a steak-only diet. Fake news, all of it. Yet in the largely unregulated world of social media, such extraordinary claims about diet are rife, and are regularly shared – and believed – by millions of internet-users.

Last week, in the first of our two-part exposé on health news fakery, we revealed how lives are being put at risk by fake news about vaccines, cholesterol-lowering statins and the risks of mobile phones and plastic bottles.

Today, we shine a light on misinformation surrounding food. The urgency is clear: in a recent survey, US dieticians said Facebook was the main source of confusion on nutrition for patients seeking a quick fix for their dietary dilemmas. Professor Louis Levy, head of nutrition science at Public Health England, says: ‘We’re very concerned because we’re trying to help people make the right choices, and conflicting messaging makes this so much harder.’

Dr Alan Levinovitz, author of The Gluten Lie, points out that the language is almost always quasi-religious in tone with wellness ‘evangelists’ promoting their health ‘miracles’. He warns: ‘Do I think this is dangerous? Yes.’
And Anthony Warner, author of The Angry Chef, which debunks diet myths, says: ‘To make a “diet” or claim stand out, people have to become more and more extreme. You get vegans, then raw food vegans and eventually people who are just eating cucumber. It’s preposterous.’
So just what are some of the worst fake food news offenders? Here, we examine a few of the most dangerous nutrition myths currently circulating online.

The reason? The 28-year-old claims she cured her severe arthritis by cutting out almost everything from her diet – except meat.

She now no longer takes medication, her pain and inflammation has evaporated and her memory and energy has improved.

Mikhaila Peterson claims she cured severe arthritis by cutting out almost everything from her diet apart from beef, salt and water

That she has also lost weight means her carnivore diet – involving consuming nothing but beef, salt and water – is now being heavily promoted across social media. Mikhaila’s father, the controversial Canadian pop psychologist Jordan Peterson, is also a devotee. One YouTube clip in which her father claims that the diet ‘cured’ his depression has garnered 783,000 views.

The message has now been lustily embraced by a largely male body-conscious audience and videos promoting it on Facebook have been viewed millions of times.
One Facebook group, Carnivore Diet Lifestyle, is followed by more than 10,000 people and includes messages such as: ‘If you eat animals who ate their vegetables, you don’t need to eat your vegetables.’

Mikhaila’s blog, called Don’t Eat That, prospers even though she, like many celebrities advocating nutritional fads, has no credentials in nutrition or medicine.

There is no evidence, bar Mikhaila’s own personal testimony, that a meat-only diet can treat rheumatoid arthritis, which is caused by the immune system turning inward and attacking healthy joint tissue. The condition is known to spontaneously resolve itself, however.

While the Government advises people not to consume more than 1 lb of red meat a week to limit the risk of bowel cancer, dieticians have branded the carnivore diet ‘disastrous’ and warn that following it would lead to nutritional deficiencies, gut problems and heart disease.

Dietician Marcela Fiuza warns: ‘This is another nonsense fad. You wouldn’t get the nutrition you need and your gut will not function optimally due to lack of fibre. You can end up in very poor health.’

Imagine taking a few spoonfuls of coconut oil every day – and curing yourself of Alzheimer’s. It sounds absurd. Yet hundreds of thousands of people have viewed online videos by a US medic, Dr Mary Newport, who claims you can do just that.

The amount of information online and across social media about the advantages of switching to coconut oil is impossible to overstate: lists of its ’30 top benefits’ are ubiquitous and shared millions of times; eating it can help you lose weight, make your skin, hair and teeth better and help in the fight against heart disease, epilepsy and, yes, dementia. Amid the hype, UK sales of the oil have rocketed by nearly 500 per cent in just five years.

But there is no evidence coconut oil can cure Alzheimer’s and some evidence it could make it worse, by raising levels of a harmful protein in the brain called acetylcholinesterase. Researchers have found levels of the protein are higher in people with Alzheimer’s and current treatments aim to lower them.

Professor Pete Wilde, from health research company Quadram Institute Bioscience, says the focus on coconut oil came after recent studies showed some of the fats in it could have health benefits because they were quickly ‘burned’ by the body for energy.

He adds: ‘Just 40 per cent of coconut oil is made from these fats. The rest of it is fat linked with increased cholesterol and cardiovascular disease, so excessive consumption may have a negative effect on health.

‘There are so many amazing claims about it, but the literature doesn’t back that up.’

A quick Instagram search for #detox throws up a staggering 13.1 million posts. Hollywood actress Gwyneth Paltrow’s Goop website is at the forefront of this movement.

It also advised buying new cookware ‘to get the most out of every clean meal’, including a £600 platinum saucepan and a £250 griddle pan – all available on the Goop website.
Then there’s the Facebook group that advocates ‘detoxing heavy metals and pollutants’ from the body (and has 56,000 members), while a YouTube video by US-based ‘doctor of natural medicine’ Josh Axe – watched by more than half a million – advises how to detox using just essential oils and herbal extracts.

On Amazon, a search for detox products provides over 30,000 results including ‘detox capsules’, ‘colon cleanse’ products and ‘detox tea’. But here’s the key fact: the word ‘detox’ has no clinical meaning outside of treatments for drug addiction or poisoning. The reason is simple. Our bodies already do it pretty well.

Prof Levy explains: ‘We already do detox – that’s what the liver and kidneys do all the time. There’s no real mechanistic process by which not eating, or eating certain foods or drinks, is going to remove other things from your body.’
Fake food news: Diet Coke causes Brain tumours

It is a well-worn health myth: the man-made sweetener aspartame – used in everything from fizzy drinks, including Diet Coke and Coke Zero, to chewing gum – causes cancer, multiple sclerosis, blindness, depression, memory loss and birth defects. Despite being vigorously debunked, the concept has gained new life thanks to websites that peddle fake health news.

Since it was launched in the 1980s, studies have suggested aspartame could be linked to increased rates of brain tumours and leukaemia in rats, leading to worrying headlines. But it transpired that some animals were fed the equivalent in sweetener to 20 cans of Diet Coke, every day, for months, until they died.

Despite this, the idea has stuck. Today, websites with names such as aspartamekills.com, which describes the sweetener as a ‘neurotoxin’, and sweetpoison.com, which calls it a ‘dangerous chemical’, continue to promote the idea that it is harmful.

One video recently shared on Facebook by self-proclaimed US ‘natural health expert’ Dr Joseph Mercola, which has been viewed more than 81,000 times, claims consuming aspartame leads to cancer, heart disease, dementia and strokes. And nearly one million people have watched a video from ‘eco-wellness’ group Mamavation which describes the sweetener as a ‘silent killer’.

In 2015, Pepsi dropped aspartame from its US Diet Pepsi drink in response to consumer fears over safety, replacing it with sucralose, another type of sweetener. Yet the overwhelming evidence from robust, scientific trials is that aspartame is safe. No human studies have found any link to cancer or other problems, and two major reviews, by the European Food Safety Authority and US National Cancer Institute, have concluded the sweeteners are safe.

Sophia Lowes, health information manager at Cancer Research UK, says: ‘The link to cancer was between sweeteners and animals but it was never translated into a link in humans. Showing a link in a mouse or rat isn’t the same as showing one in a human.’

And Gunter Kunhle, associate professor in nutrition and health from Reading University, points out: ‘All licensed additives are assessed for risk by European and world bodies.’

Type ‘cancer cures’ into Google and the first website that appears, after Wikipedia, is a natural health site called The Truth About Cancer, which claims that drinking vegetable juice is ‘a strategy that works’ to cure cancer.

The article, shared more than 6,000 times on Facebook, gives details of scientific studies identifying compounds in fruit and vegetables – such as phytochemicals, antioxidants and free radicals – which can kill or restrict the proliferation of cancer cells.

Social media is full of groups that promote juice as the ‘healthy’ or ‘natural’ alternative to chemotherapy, including one, Cure By Carrot Juice, that has thousands of members.

Another website, called Beat Cancer.org, claims: ‘Drinking juice made from carrots, dark leafy greens and other fruits and vegetables is an effective way to counteract the growth of cancerous cells and tumours in the body.’

Meanwhile, videos claiming that beetroot juice has cured cancer for centuries, by a group called Let’s Beat Cancer, have been viewed 174,000 times, while another video on the group’s Facebook site – with 7.4 million views – alleges extract from the blushwood berry can cure cancer in just 48 hours.

So can juicing really cure cancer? Of course not.

Dr Mangesh Thorat, a breast cancer specialist at Queen Mary University of London, warns that some compounds could even be dangerous.

‘Large supplemental doses of beta carotene, the orange pigment found in carrots, has been linked to an increase risk of lung cancer in some groups,’ he says.

‘Experiments all the time show that a particular agent in fruit or vegetables might inhibit cancer cell growth in a petri dish, but this doesn’t mean anything unless it’s shown, over a series of sequential experiments including large-scale human trials, that it actually has any impact on cancer outcomes.’

Martin Ledwick, head information nurse at Cancer Research UK, says: ‘Conventional medicine gets criticised by so-called wellness warriors who say “You don’t research this stuff”, but we do.

‘We research it properly and don’t rely on anecdotes. We’re trying to tell the truth, not spin fairy tales to make people feel better.’