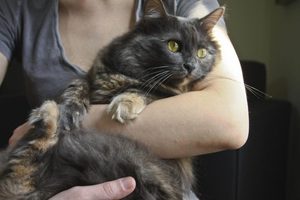 A new study examined the impact of pet ownership on people with treatment-resistant depression.

It’s no secret that animals can bring people joy, but a new study indicates that adopting a pet could prove particularly beneficial for those with severe depression.

The study, published in the Journal of Psychiatric Research, found that for those with severe depression that was not easily treatable, adopting a pet could help lessen symptoms.

Jorge Mota Pereira and Daniela Fonte, two Portuguese researchers, recruited 80 study participants who had “treatment-resistant major depressive disorder.” They encouraged each one to adopt a pet. Of the 80 participants, 33 agreed to adopt, with 20 individuals choosing a dog and seven choosing a cat.

According to The Independent, over the following 12 weeks, the participant’s depression symptoms were studied during checkups at four and eight weeks.

The results at the end of the study implied that adopting the pet had been beneficial for some. More than 33% of the group, according to the Independent, had higher scores on depression rating systems like the Hamilton Depression Rating Scale and the Global Assessment of Functioning Scale, and the scores were considered mild rather than severe.

According to the study’s authors, one reason for this may be that the level of care a pet requires could impact depression symptoms positively.

“By having the responsibility of taking care of an animal, people have to get up in the morning to take care of the animal, namely pet them and feeding them,” the researchers wrote, according to Bustle. “In the specific case of dogs, the need of taking a dog for a walk, hike and run promotes the increase of physical activity and could help its owner to meet new people that also have pets, sharing experiences and improving their social skills.”

The researchers concluded that owning a pet could be an “effective adjuvant” to more traditional depression treatments.

However, writer Christian Jarrett pointed out in a blog for the British Psychological Society Research Digest that the improvement in patient’s scores and symptoms could have to do with more than adopting a pet.

“So, although pet-adopters and the controls were matched for baseline depression symptoms, there may have been other ways that they differed,” he writes. “For instance, perhaps there was something different about the personalities or social circumstances of the pet adopters that contributed to their willingness to adopt a pet and to their higher remission rates (raising the possibility that the pet adoption itself was not the main ‘active ingredient’ in their recovery).”

Beth is a Minnesota girl who got sober at age 20. By day she is a website designer, and in her spare time she enjoys writing about recovery at lifetobecontinued.com, doing graphic design and spending time with her boyfriend and three dogs. Find Beth on LinkedIn, Instagram and Twitter.