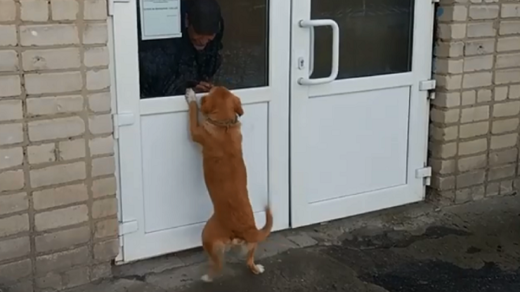 Heavy snowfall, chilling wind, and temperatures far below zero are no obstacle for true love as proven by a loyal dog, who has been waiting for her sick master outside a hospital for two weeks now.

Her amazing fidelity has quickly made, Cherry, from the Russian city of Voronezh a media sensation and led to obvious comparisons with Hachiko.

Back in the 1920s, a Japanese dog had been waiting for her owner’s return outside a train station for nine years, not knowing that he passed away, to become an ultimate symbol of friendship.

But Cherry’s story isn’t a sad one as her master, Dmitry Bubnov, is recovering from his sickness and will be soon discharged.

However, even a short separation was unbearable for the mutt, who has been spending day and night outside the hospital since her master got there.

The man’s wife, Svetlana, said she tried to take the dog home many times, but Cherry always escaped and returned to the hospital walls. “She loves daddy more. She was his dog initially,” she told Mir 24.

Dmitry comes outside every day to spend time with his pooch. He feeds her cutlets and pies; hugs and kisses her to make Cherry the happiest animal on the planet.