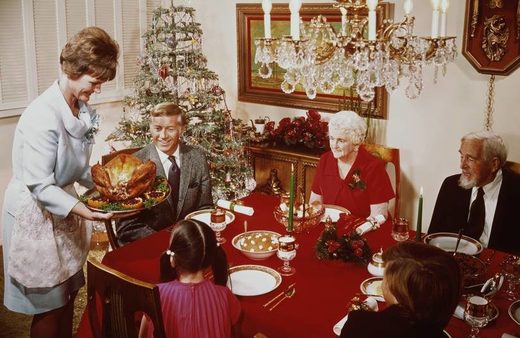 Christmas would be great if we just agreed not to talk at all
Christmas holidays can be wonderful – time off work, eating yourself into a stupor, drinking for no reason – but it’s also when you’re most likely to run into awkward conversations about politics, your love life, or everything in between.

“Everyone is tired, and it’s the end of the year, and we’re quite emotional,” says clinical psychologist and columnist Linda Blair. “If you’re spending the holidays with people you’re related to – you know, you can love people without liking them – and it’s busy and you’re travelling, everything can just get aggravated.”

It may sound dire (and very familiar), and sometimes you just want to avoid the questions, but there are a couple of key tricks that you can use to keep conversation from going downhill too rapidly. So avoid another long argument about whether millenials are selfish, or whether Brexit is good for the country, with our expert Christmas conversation tips.

Fundamentally, you will be around people who disagree with more during the holiday season. That is simply because you can’t choose your family. Cory Clark, a social psychology professor at Durham University, says that the holidays are uncomfortable because we’re not used to those situations. “In our everyday lives, we tend to surround ourselves with friends and colleagues who are similar to us and who often share our values and political views,” she says. “But we don’t have that type of control over the values and views of our family members.” So the sooner you recognise it’s unlikely to be smooth sailing, the better.

That being said, there are still a couple of options left

It’s unlikely that an hour of conversation over dinner will help you swing your pious aunt into atheism, or vice versa. So if you can, avoid starting conversations on topics that you know could lead to controversy. The holidays might be the best time to plead ignorance.

“Political issues are often very complex, and even experts don’t have all the answers, so humility is always a defensible position,” says Clark. If things really aren’t going your way, it’s probably best just to point out you don’t disagree, and then try and move things on. If they keep going, just ask them about their views, or ask them what they think.

This might not always work – if you have a racist family member, you’re unlikely to want them to go on ranting about their prejudice – but if the disagreement is more benign, asking questions about why they have a certain opinion could be more helpful. “It sounds counterintuitive, but people like to talk about themselves,” says Blair. “So nine times out of ten, you can just nod along and listen.”

The best deflection tactic is always to ask about something neutral, or something that only they would know about. Ask about their book club, or their job, or what the holidays were like when they were kids. For some older relatives, this will mean a trip down memory lane which could make your life significantly easier for a while. But this isn’t foolproof. “If somebody is determined to get onto a religious or political platform, then even topics which appear neutral might not be safe,” adds Blair.

Deflection is a worthwhile tactic, and if you’re subtle about it, they might not even realise what you’re doing. But if your aunt, uncle or really nosy cousin is determined to hammer home a point, then you might have to try and find some common ground, and milk it for all its worth.

“If it’s just that you like the mashed potatoes too, that will have to do,” says Liz Joyner, who runs The Village Square, an institute aimed at improving civil discourse. “People are reciprocal, so they might return the favour and that could get the ball rolling in a better direction.” You could even surprise yourself – your grandma’s newly anointed gardening habit could give you a couple of tips on how to stop killing the potted plants in your flat.

To do this, you need to have a few other things in place first – you need to be at a big gathering, preferably somewhere with a few rooms or a confusing layout. But if nothing else seems to be working and a relative has latched onto the current state of the Labour party, you could politely excuse yourself. “It’s not a bad idea to go outside, or go for a little walk if you can,” says Blair. “If you come back 20 minutes later feeling refreshed, you might be able to handle everything going on a little bit more easily.”

“Rather than treating family gatherings as opportunities to challenge your relatives’ political views, we can treat these as opportunities to engage with people who might have different information and ideas,” says Clark. “Try to learn from them, and understand their perspective – but don’t expect them to return the favour.” Perhaps you’re meeting new family members, or you’ve changed your mind about something recently – you can indulge that optimism for a little while. If you assume that people have good intentions (and, like you, want to avoid an argument) you might be able to have a somewhat intellectual or an enriching conversation. Perhaps this is best left as a distant possibility.