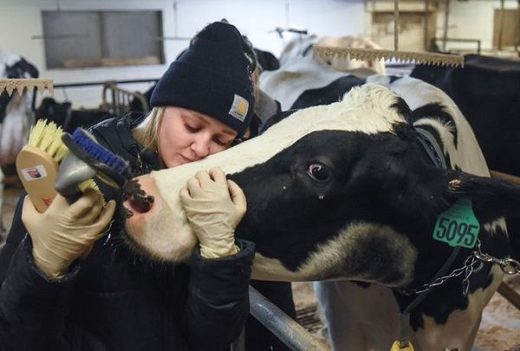 First, there were therapy dogs in local schools. Then there were yoga goats on local farms. Now, a herd of dairy farm cows has gone back to school – to help college students de-stress before their tests.

This month, the Lansing State Journal reported on a new program at Michigan State University allowing students to brush dairy cows to chill out during final exams week.

PEOPLE reached out to Andrea Meade, Farm Manager at the Michigan State University Dairy Cattle Teaching and Research Center, to learn more about this unique human-animal bonding experience. She had been looking for ways to get students outside the College of Agriculture and Natural Resources aware of the dairy farm. Meade was also particularly keen on finding “a new way to utilize the herd.”

“I have been following other trends in agriculture like ‘goat yoga’ and wanted to see if any MSU students would be interested in a similar experience,” says Meade.

Meade tells PEOPLE that about 50 students participated in the program, including MSU undergrads as well as a few PhD candidates. She says the animal group consisted of 35 cows, ranging in age from 2 to 10 years old, who were specially picked out for brushing sessions.

“We had Christmas music playing, and all of the students remarked how much they had enjoyed getting to meet the cows,” Meade tells PEOPLE. “The cows very much enjoyed this event; I would say they equally enjoyed brushing and petting. Social grooming is an important natural behavior for cows. You can always tell when a cow is relaxed because she will be chewing her cud … Rumination [cud chewing] is when the cow regurgitates the food she has stored in her first stomach [cows have four stomach compartments], chews it, and actually starts digesting it. We always look for cows that are chewing their cud as a sign that they are relaxed and feeling safe and comfortable. Many of the visitors got to see this as they brushed. Many of the cows were so relaxed, that they laid down and took a nap!”

However, not all of the cows were sleepy, and Meade says she encouraged students to talk to the cows, too.

“Cows are great listeners and you can tell how they are feeling by the way they hold their ears, much like a horse,” she says.

So, what’s the best technique for brushing cows? Meade says people should approach them slowly, staying out of their blind spot, which is directly behind them. The farm had two types of brushes available, so students were able to choose which brush felt best.

“I encouraged everyone to put their hand on the cows so the cows knew where they were at all times,” Meade explains. “From there, most people started on the top of the cow and worked their way down. It was interesting to see that some people picked one cow and worked on her the entire time, while others bounced around from cow to cow.”

Meade says that cows are similar to dogs, “because they are very soulful, calm animals.” She says this with the caveat that “they are not the world’s smartest animals, but [they’re] just smart enough to sometimes get in trouble. They are very social, group-oriented animals that hate to be alone, and they have very strong social structures, just like a pack of dogs.”

For Christmas, Meade says the cows will be up to their “normal” routine: eating, sleeping and making milk. And because work on a dairy farm doesn’t stop – not even for holidays – the team of dedicated full-time employees and student staff will be there throughout Christmas, into the new year (and beyond) to take care of the cows.

While this was the MSU dairy center’s first-ever cow brushing event, Meade and staff think it went very well overall; they hope to do it during next semester’s finals week, too. Although the team kept the cow therapy event small this time and limited to students, they may open it to the general public in the future so people can get a glimpse of where (and who!) their milk comes from.

The farm is open to the public from 7 a.m. to 4:30 p.m. every day, and self-guided tours are available all year around.