Clean your room! The problem with completing household chores in a timely manner 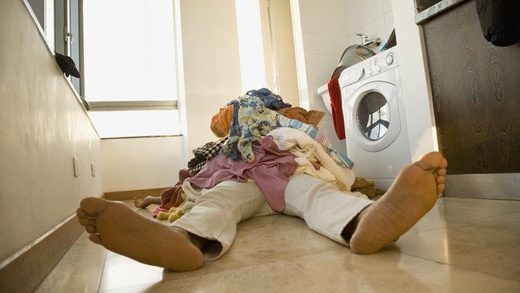 Clean your room! The problem with completing household chores in a timely manner

Chores are the worst.

I’m trying to construct an alternative theory of myself in which I’m a tidy person. It’s not going well. Walking my recycling from my apartment to the trash room down the hall takes me anywhere from two minutes to a month. I hate looking at broken-down boxes and empty LaCroix cans in my apartment, but studies say humans are bad at prioritizing long-term goals over instant gratification, and I apparently find doing anything else much more gratifying.

It doesn’t take a scientist to explain why I might put off other things, such as doing my dishes. Those are annoying and kind of gross, and the primary reward is just being able to use them in the future. Still, at a certain point, the anxiety of not having done these tasks surpasses the annoyance of doing them in the first place. That’s an entirely predictable cycle that many otherwise productive people find themselves in when it comes to simple household jobs: A chore that I could feel good about completing in 10 minutes instead stresses me out for days or weeks.

It can be hard to understand why this behavior is so common. The topic is tempting fodder for self-styled gurus wielding empty motivational platitudes, but the underlying cause is complex-an odd cocktail of emotional and psychological dynamics, all conspiring to let my bedding remain dirty for another week.

According to the DePaul University psychology professor Joseph Ferrari, there are two distinct types of people who have a problem completing household chores in a timely manner: task delayers and chronic procrastinators. The scientific distinction between the two is hazy, but it comes down to pervasiveness. You might feel overwhelmed by your aversion to housework, but on its own, it’s not enough to be indicative of a chronic problem. All people procrastinate sometimes, Ferrari says, but for chronic procrastinators, it happens in all areas of life and has a negative impact on a person’s health and relationships. It’s a “lifestyle of avoidance,” he says.

Ferrari’s research finds that description applies to about 20 percent of people. Simple task delayers are more common, but they usually have a much easier time building better habits than their chronic counterparts, which is good news for people whose primary problem is chore procrastination. We’re not that bad!

Part of the reason task delayers are lulled into their bad habits in the first place might be the time of the day or week when chores often occur. “Doing those tasks takes some self-control, and if you’ve made a lot of choices already that day, it’s harder to exert self-control,” says Roy Baumeister, a social psychologist and Florida State University professor. Baumeister is referring to a somewhat contested theory called “decision fatigue,” which holds that people’s brains get worn out by the necessity of being decisive and exercising restraint, usually at work. If you could sit at your desk and play Candy Crush all day like you might want to, washing some plates when you get home might not seem as onerous.

As any good chore procrastinator knows, the drama doesn’t simply end with deciding to do something later. For Gloria Fraser, a caretaker from Massachusetts, that’s where it just begins. She’s always considered herself a prompt, efficient person in her professional life, but the emotional baggage of housework makes personal chores more difficult. “There’s the negative tape going on in my head that I should have done something, and why did I wait until it got this bad,” she says. “So that’s piling up, and instead of doing it, I’m thinking about all the times I should have been. So I end up kind of catatonic over not doing stuff instead of doing that stuff.”

Guilt and shame can be big parts of procrastination if the procrastinator begins to internalize the desire to avoid dirty dishes as indicative of larger moral failings. “We bring other things to this besides the task itself, and we tell ourselves stories about who we could be if we just buckled down and did that thing,” says Liz Sumner, a life coach who helps older women break bad habits and be more productive. Sumner recommends breaking tasks into small, manageable steps, but those efforts can still be thwarted when people worry they aren’t changing or progressing quickly enough.

“A big problem people have is they attack themselves and not their behaviors,” Ferrari says. If task delayers can depersonalize their aversion to, say, vacuuming or litter-box changing, he believes, they stand a better chance at being able to evaluate it rationally, avoiding the shame cycle that can calcify negative behaviors into bad habits.

If a problem can be understood, maybe it can be fixed. Betsy Burroughs, a Silicon Valley branding executive turned neuroscience researcher, used to have a hard time keeping her home tidy. “It was just a disaster all the time,” she says. “But then I noticed that if I was having people over, not only would I clean the place up, but I’d actually enjoy cleaning it.” Her solution was to start a monthly conversation salon at her San Francisco loft, which ran for more than 12 years. Starting your own event series might be a little extreme for most people, but the idea of recognizing what you dislike and recontextualizing it as an element of something positive can be applied to most housework.

Being conscious of your habits does seem to have an impact on procrastination, but in ways more complicated than I had first assumed. In 2011, the Stanford University researcher Carol Dweck published findings that suggest decision fatigue more negatively affects people who already expect their willpower to be low. People who expect themselves to fail toward the end of the day, in other words, often do. Maybe task delayers could all be better around the house if we simply stopped granting the premise that “bad” is the default with which we are stricken. Procrastination researchers, it should be mentioned, all seem to answer their emails in a timely manner.

Still, a certain level of delay might just be an inescapable part of the human brain, especially when the task is tricky. When I asked Ferrari what the inflection point is between being a task delayer and a chronic procrastinator, he told me that was a complicated question. “Every two years, researchers on procrastination have an international meeting. We’ve been doing it for 20 years,” he says. “After each of these meetings, we walk away saying that we’ve got to get people to understand the difference between delaying and procrastination.” They haven’t arrived at an answer yet. Maybe the time for it, like the time for my recycling, will come soon.