BEST OF THE WEB: ‘Bad advice’: Group of doctors in Canada lobby to change Food Guide, calling for more meat and fat in diet and less carbs and sugar 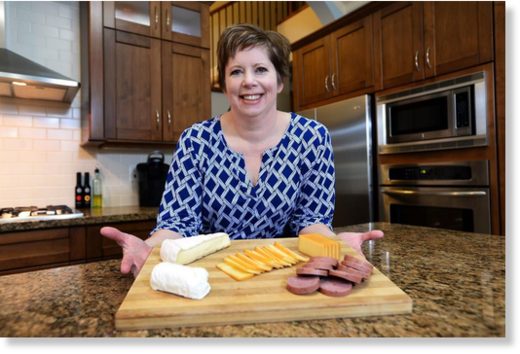 BEST OF THE WEB: ‘Bad advice’: Group of doctors in Canada lobby to change Food Guide, calling for more meat and fat in diet and less carbs and sugar

Allen Bradshaw, a pathologist from Abbotsford, B.C., is part of a group of doctors from across the country who have been on a crusade to change the way Canadians are told to eat.

For the past two years, she and her colleague Dr. Carol Loffelmann, an anesthesiologist in Toronto, have spent much of their free time travelling the country, urging colleagues and regular Canadians alike to eat fewer carbohydrates than what’s recommended by the government and indulge in fat from sources such as steak and cheese – even if that flies in the face of conventional wisdom.

It’s all they can do as they wait to see whether Health Canada will heed the message from their grassroots campaign.

Since 2016, the women, who founded Canadian Clinicians for Therapeutic Nutrition, a national non-profit, have lobbied the government, with letters, an Ottawa meeting and a parliamentary petition signed by nearly 5,000 Canadians, to reconsider the diet advice they believe Health Canada plans to deliver in the next iteration of the Food Guide, which is due out in early 2019, according to a Health Canada spokesperson.

Allen Bradshaw and Loffelmann, who works at St. Michael’s Hospital, say some of the new recommendations may not be based on the most current, relevant scientific evidence and could continue to make Canadians overweight, reliant on medication and suffer from diabetes, fatty liver disease and metabolic syndrome.

In an email to the Star, Health Canada said that as the new advice is finalized, it is also updating its evidence base with the latest nutrition science and that too will be released to the public in early 2019.

“The Food Guide has benefited from the input of many stakeholders,” the email said. “We are taking all feedback into consideration.”

Over coffee on a recent morning in downtown Toronto, the women, who met online, said the coming recommendations, which are based, in part, on evidence reviews released by Health Canada in 2015, will likely tell Canadians to limit added sugar and encourage them to eat whole, rather than processed foods. Those are good things, they said.

But, they said, Health Canada continues to hold strong on evidence that’s outdated and incomplete. For instance, they said some studies show that diets low in saturated fat, from sources such as beef and butter, are associated with heart disease.

But the jury of science is still deliberating on the full impact of saturated fat on health and so, the women said, in those cases and others, the Food Guide should remain “silent.” Or, conduct a rigorous, independent review of the research.

The women’s crusade began several years ago with their own, quiet struggles to lose weight.

After giving birth to her second child, Loffelmann dutifully followed the diet advice, informed by the Food Guide, that she learned in medical school. She ate whole grains, substituting whole wheat for white pasta, and leaned off the butter. Heeding the guide’s deeper advice to move more and eat less, she took up high-intensity exercise. But over time, her waistline expanded.

On the other side of the country, Allen Bradshaw, who was on the same kind of diet, struggled to lose weight and overcome gestational diabetes during her third pregnancy.

Independently, the two women began a search for answers diving deep into the scientific literature. What they found was that much of the Food Guide’s advice was not supported by the most current science.

So they started experimenting. Eating the opposite of the country’s nationally sanctioned advice by indulging in full fat yogurt and ditching the bowls of rice and pasta, they both lost weight. And stopped feeling hungry all the time.

The two took to the internet, sharing their successes with a small group of mom physicians across the country, who, to their surprise, were receptive. The small group grew as the women shared their results. Over time, they heard from doctors across Canada who began prescribing the same type of anti-food guide diet to their patients.

“All of a sudden, doctors are seeing their patients get off medication, losing weight and their markers of disease are dropping and their disease is going away,” Allen Bradshaw said.

That was a turning point for the women.

Armed with a letter signed by 190 physicians, they sent it to Health Canada in 2016, saying that in the 35-plus years since the government entered the country’s kitchens, the population has grown fat and sick.

Their letter urged the bureaucrats, who were at that point relying on evidence available in 2014, to consider the most current studies available. The letter added: “Stop using any language suggesting that sustainable weight control can simply be managed by creating a caloric deficit.”

The response was a form letter. The women answered it with a more detailed version of their initial correspondence, this time citing the current, relevant studies and signed by 700 medical professionals including doctors, nurses and pharmacists. They received a deeper response from federal Health Minister Ginette Petitpas Taylor.

It said her ministry was relying on “high quality reports with systematic reviews of associations between food and health” from federal agencies in the U.S. and around the world. And that it continued to monitor for more evidence.

After more of a back and forth, the physicians were invited to Ottawa for a meeting with Health Canada.

It was a warm May morning this year when the women, along with three others, including Dr. Andrew Samis, a critical care and stroke physician from Kingston, Ont., stood outside the parliamentary building that houses Health Canada’s headquarters. They took a deep breath. Within minutes, they were spirited to a boardroom.

Over two hours, they explained their position, including, Samis said, that science on saturated fat remains incomplete and the government should reconsider the evidence it uses and how it evaluates what evidence to use for its recommendations.

He also told the bureaucrats, including Hasan Hutchinson, director general at Health Canada’s Office of Nutrition Policy and Promotion, that Canadians, a multicultural lot, should be given several diet options, rather than a one size fits all. To varying degrees, he said, the research supports five legitimate diets, including plant-based, low fat, Mediterranean, ancestral paleo – fruits, vegetables and lots of protein – and keto, meaning low carb, high fat. Samis said: “We felt they were really listening.”

But shortly after the meeting, Samis heard Hutchinson on the radio plugging the old, tired advice. “It was disappointing,” he said.

The group’s last attempt at persuading lawmakers was a parliamentary petition signed by 5,000 Canadians and presented on Sept. 26 in the House of Commons urging lawmakers to conduct an external review of the evidence before unleashing new, potentially harmful advice on the public.

With that, the doctors have been left to wait. And spread their message in webinars and talks large and small across the country.

At CFB Trenton, Allen Bradshaw, who spent 14 years in the Canadian army as a medic, drank in the atmosphere and relished the nostalgia of her time in the reserves, where she assisted army doctors in tending to injured soldiers. The crowd, she said, ate up her anti-diet advice especially the edict that society has to stop blaming patients who follow the Food Guide and fail to lose weight, she said. “It’s not their fault.”