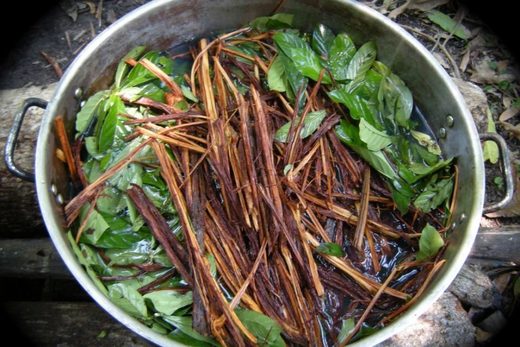 For centuries, some indigenous groups in South America have relied on a brew made from the parts of a local vine and a shrub. The effects of this drink, called ayahuasca, would begin with severe vomiting and diarrhea, but the real reason for drinking the tea was the hallucinating that followed. These visions were thought to uncover the secrets of the drinker’s poor health and point the way to a cure.

Modern techniques have revealed that one of the compounds underlying these mystic experiences is the psychoactive drug harmine. What these first users of ayahuasca couldn’t have known was that, one day, this ingredient in their enlightening brew would be positioned as a key to treating diabetes.

Such a cure is a long way off, but researchers took another step toward it when they combined naturally occurring harmine with a compound synthesized from scratch in a lab. Together, the pair can coax the insulin-producing pancreatic cells, called beta cells, into replicating at the fastest rates ever reported, according to findings published December 20 in Cell Metabolism.

Type 1 diabetes arises when the body turns on these cells and destroys them. Type 2 diabetes develops when these same cells wear out and can no longer make insulin. Either effect is a point of no return because the beta cells we make in early life are the only ones we’ll ever have.

If this pair of compounds eventually inches into the treatment toolbox, refreshing a faded cell population could become a reality and a possible treatment for diabetes. “Looking back 10 years or so, we questioned whether human beta cells could even be coaxed into dividing,’ says Justin Annes, assistant professor of medicine and endocrinology at Stanford University, who also works on beta cell proliferation, with a separate investigator group. “But what began as a fantasy has become aspiration, and perhaps in the coming years, will be a reality.”

One stop on the trip to that reality was a 2015 study showing that harmine treatment of beta cells in a dish promoted their increase at a rate of about 2 percent per day. A promising beginning, says study author Andrew Stewart, scientific director of the Diabetes, Obesity, and Metabolism Institute at the Icahn School of Medicine at Mount Sinai, but a little too slow for someone who needs a replacement population.

In this newest study, Stewart and his colleagues show that combining harmine with a synthetic inhibitor of another molecule kicks up the rate to 5-8 percent on average, and as high as 18 percent using some growth recipes. The one-two punch of this chemical pair isn’t the only possible combination, and other groups also are working on various pairings, Stewart says. Annes and his colleagues have identified several compounds that hold similar promise for pushing insulin-producing cells to reproduce.

“Basically, we’re all competing, but we all know each other so we share reagents and ideas,” says Stewart. “Different people have identified different drugs that make beta cells replicate.” His lab chose harmine because it’s the one they pulled out of their screening of 100,000 compounds in 2015, but “I don’t think harmine is especially better than any other one,” he says.

In 2006, another group of researchers plucked harmine from a molecular haystack in a search for chemicals that interact with a protein associated with Down syndrome. Studies that followed showed harmine’s role in many body systems, including the gut and the brain, explaining in part the effects of ayahuasca on its earliest adopters.

Harmine interferes with an enzyme called dual-specificity tyrosine-regulated kinase 1A, or DYRK1A. Like harmine, DYRK1A operates in a host of tissues. It helps, for one, in shaping the central nervous system during embryonic development. First identified because of its key involvement in Down syndrome, its routine duty is to add chemical tags to molecules to switch them on or off.

The other molecule in the synergizing pair is an inhibitor of a group of proteins in the transforming growth factor-beta superfamily (TGFβSF). As with DYRK1A, these proteins are active in a large number of body processes, including cell proliferation.

Stewart and his team homed in on TGFβSF and DYRK1A after probing the secrets of cells from benign pancreatic tumors called insulinomas. They reasoned that if they could pinpoint what made these tumors grow, they could co-opt that information to encourage growth of normal beta cells. Their exploration uncovered DYRK1A and TGFβSF-related targets.

Inhibiting these molecules in human beta cells in a dish shuts down the cell regulators that usually keep the brakes on cancer’s out-of-control cell growth. Because harmine and TGFβSF inhibitor release this brake and DYRK1A and TGFβSF are active in many tissues, any treatment involving the pair of inhibitors must be closely targeted. “Certainly, we have a long way to go before these medications can be used in humans,” says Annes, calling the concern about cancer risk “reasonable.”

Adding to that concern is that harmine affects other cell types, says Klaus Kaestner, professor of genetics and associate director of the Penn Diabetes Research Center at the University of Pennsylvania, who was not involved in the study. In 2016, his group reported that harmine triggers many types of hormone-producing cells to divide, including other cells in the pancreas.

Stewart and his colleagues are sorting through a number of potential chemical tags that might help guide the inhibitors to the right location. But for now, says Stewart, “we are Amazon and have a bunch of parcels, and we know that they’re for you, but we don’t know the address.”

Type 1 diabetes poses another hurdle. Although the immune system targets and destroys these cells in this form of diabetes, a small pool of beta cells often remains, Stewart says. What’s unknown is if a new population grown from these cells would simply attract further immune destruction. Stewart says that if the harmine-TGFβSF inhibitor combination ever makes it to trials, the population it might initially suit best are those who have type 2 diabetes. Then the journey from a South American rainforest to a clinical treatment would be complete.

Emily Willingham is a science writer and co-author with Tara Haelle of The Informed Parent: A Science-Based Resource for Your Child’s First Four years (TarcherPerigee, 2016). She writes at the intersection of brain research and society.