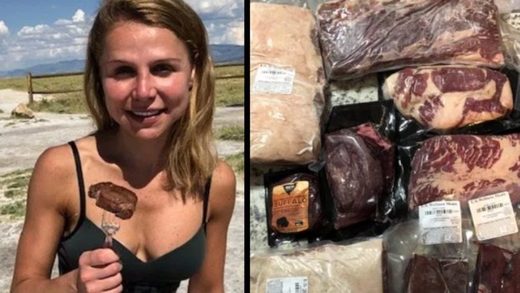 But while on antibiotics, Sylwia says the only thing she ate that wouldn’t go straight through her was meat.

After a mate joked that she should start a ‘carnivore diet’, in January 2018 she tested it out and began eating just rare steak or offal.

She claimed: “The more I looked into it, the more I discovered that meat eating is the most efficient way of absorbing nutrients, far more so than when you add carbohydrates and vegetables into the mix.”

She hasn’t looked back and even claims she’s ‘healthier’ now than when she was a vegan.

She said: “I just feel so much better than I ever have done, even when I was eating a normal diet.

“For the people who think it might be unusual, I would say just give it a try because it may really help you feel better in yourself.”

And though she originally became a vegan in part because of the ethical concerns, she says she makes sure she knows where her meat is coming from.

Sylwia said: “I source my own meat from a local farmer. I know that it is coming from a good place, so the ethical concerns that I had before don’t worry me anymore.

“Vegetables and seeds – which were for a long time my only food source, are actually anti-nutrients, compounds which if eaten excessively interfere with your gut absorbing what it needs. And that definitely affected me in the long-run.”