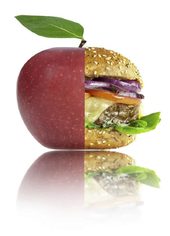 Processed foods labelled “low fat”, “lite”, “low cholesterol” or “proven to lower cholesterol” should be avoided at all costs and people with Type 2 diabetes should eat a fat-rich diet rather than one based on carbohydrates.

The authors of the report also argue that the science of food has also been “corrupted by commercial influences”.

The influence of the food industry represents a “significant threat to public health”, they argued.

They said the recent Eatwell Guide from Public Health England was produced with a large number of people from the food and drink industry.

“As a clinician, treating patients all day every day, I quickly realised that guidelines from on high, suggesting high carbohydrate, low-fat diets were the universal panacea, were deeply flawed.

“Current efforts have failed – the proof being that obesity levels are higher than they have ever been, and show no chance of reducing despite the best efforts of government and scientists.”

But Professor John Wass, the Royal College of Physicians’ special adviser on obesity, said there was “good evidence that saturated fat increases cholesterol”.

He added: “What is needed is a balanced diet, regular physical activity and a normal healthy weight. To quote selective studies risks misleading the public.”

Dr Alison Tedstone, Public Health England chief nutritionist, said: “In the face of all the evidence, calling for people to eat more fat, cut out carbs and ignore calories is irresponsible. Unlike this opinion piece, our independent experts review all the available evidence – often thousands of scientific papers – run full-scale consultations and go to great lengths to ensure no bias.”