Are your super-cushioned running shoes doing more harm than good? 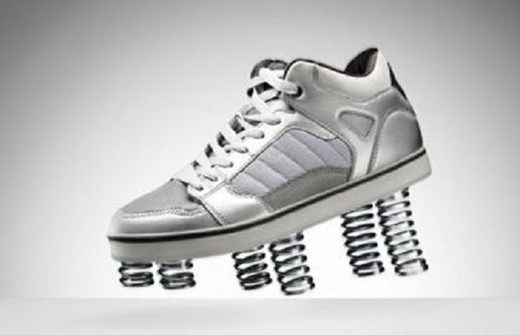 Are your super-cushioned running shoes doing more harm than good?

Highly-cushioned running shoes are meant to protect against injuries, but they may actually do the opposite by changing the way we run, research suggests.

Humans have been running for hundreds of thousands of years, and of course for most of that time we ran barefoot. Modern running shoes were actually only invented in the 1970s. Since that time, back, hip, knee and ankle overuse injuries, including tendonitis, and muscle disorders have only increased. So health experts came up with what they thought was a novel approach–namely that “we need more support from our footwear.” Nothing could be further from the truth.

Every year, it’s estimated that at least one-third of runners get stress fractures, shin splints or muscle or joint injuries caused by repeated pounding of the pavement. Many shoe manufacturers have added extra padding to try to soften the impact on the legs, but injury rates have not decreased as a result.

A new study suggests this is because the extra cushioning changes the spring-like mechanics of the legs as they run, which actually means we experience more tissue damage with every stride.

Biomechanics of the Foot Strike

Your feet are your connection to the ground. What that said, there’s a lot of prerequisites that go into performing your movements. One of the functions that the foot has that’s of particular interest is that it’s a base of support; whether it be in a single stance, as you would be if you’re sprinting, or in a double stance if you are walking, squatting, or other basics.

The second component to it is that it’s a mechanism for leverage to create propulsion. And for propulsion to occur: 1) There must be contact with the ground and it has to act as a base of support in order for that to happen. and; 2) The other component that the foot has or is responsible for is shock absorption. You cannot propel yourself and not be able to absorb the impact at contact. Those four functions that the foot has are all intertwined, so no one function is superior to the other. It’s the sum of all functions that creates a superior foot.

A typical sequence for foot function regardless of if you’re walking, if you’re jogging, if you’re running or sprinting, is that with your foot, the initial contact is with the outside of your heels first. The second step that occurs is what we call pronation; that’s where your foot starts to flatten, if you will. That mechanism there is essential because that is where a lot of force absorption, absorbing impact at contact occurs, but also too, its second function there is to set up the foot for the final phases of contact with the ground.

The third step after pronation is supination; this is where your arch starts to increase in height, which permits rigidity in the foot to allow you to toe-off, which is the final stage where your toe-off, in the true sense of the word, should occur between the first and second toe. Most people land on the heel and pronate but they pronate either too soon, too abruptly, or it’s sustained too long so that their foot is forced to rush into supination. In doing so, it’s almost like a flicking mechanism where you end up toeing-off on the outside of your foot.

Juha-Pekka Kulmala at the University of Helsinki in Finland and his colleagues conducting a study on the biomechanics of 12 healthy men aged 22 to 32 as they ran in two shoe types — a regular sneaker with 33 millimetres of cushioning under the heel and 22 millimetres under the forefoot, and a highly-cushioned “maximalist” sneaker with a 43-millimetre heel and 37-millimetre forefoot height.

The participants ran at two different speeds — 10 and 15 kilometres per hour — along a 30-metre platform that measured how hard their feet hit the ground. They also wore reflective stickers that allowed video cameras to capture their motion.

At both speeds, the runners landed on their feet harder when they wore the maximalist sneakers than the regular kind. The peak impact force was 6 per cent higher on average at the slower running speed and 11 per cent higher at the faster speed.

The video analysis suggested this was because the runners bent their knees and ankles less when they wore the maximalist shoes, which caused their bodies to decelerate faster as they landed and placed extra stress on their legs.

Normally when we run, our legs act like springs that compress as the feet land and then release as they take off, says Kulmala. But because highly-cushioned shoes already compress under the feet, the legs don’t need to compress as much themselves, meaning they bend less at the knees and ankles, he says.

This extra leg stiffness and higher ground impact means that running in maximalist sneakers is likely to increase the risk of injuries, particularly stress fractures, says Kulmala. It also means that the common advice given to injury-prone runners to buy shoes with more padding may actually backfire, he says.

If The Shoe Fits

One of the problems with using performance footwear is that once they’re out of the support, they don’t necessarily use their foot correctly to initiate a lot of the basic movements, including walking for that matter. So they run into an issue where they don’t really use the foot and they’re more from-the-knee-up dominant versus athletes such as distance runners or recreational runners.

Kade Paterson at the University of Melbourne in Australia says the findings make sense from a biomechanical point of view, but adds that long-term research is needed to confirm that people who wear maximalist sneakers do in fact sustain more injuries. “As a sports podiatrist, I’ve seen patients who’ve reported improvements with maximalist running shoes and others who’ve got injured in them so there probably isn’t a one-size-fits-all approach,” he says.

The results do not suggest that runners should opt for shoes with no padding at all, says Kulmala. For most people, a moderate amount of cushioning is likely to be best, he says. “Like many health-related things, we should be somewhere in the middle.”

Running barefoot or in minimalist shoes, which became popular about 5 years ago, is only advised if you land on your forefeet, says Kulmala. Most people land on their heels, which tend to collide more forcefully with the ground and therefore need more cushioning, he says.

The findings are also only relevant to runners, not walkers, since walking does not cause the same impact with the ground, meaning the level of cushioning is unlikely to matter as much, says Kulmala.