‘We hear what we listen for’ – The art of listening well 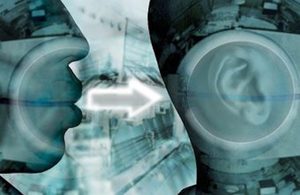 ‘We hear what we listen for’ – The art of listening well

Forget about what you were going to say next. Make sure you hear what the other person says

A zoologist was walking down a busy city street with a friend. In the midst of the honking horns and screeching tires, he exclaimed to his friend, “Listen to that cricket!”

The friend looked at the zoologist in astonishment and said, “You hear a cricket in the middle of all this noise and confusion?”

Without a word, the zoologist reached into his pocket, took out a coin, and flipped it into the air. As it clinked on the sidewalk, a dozen heads turned in response.

The zoologist said quietly to his friend, “We hear what we listen for.”

Day after day, inside and outside of business, we miss important information because we don’t listen with full attention. We also misunderstand and misinterpret messages and ideas because of our preconceptions, biases, and wishes. Take the manager who dreaded to see his secretary go away for her two-week vacation. When the secretary told the boss she’d be taking time off, it just didn’t sink in. Said the secretary later: “I told my boss three times I was planning on taking my vacation in October. It just didn’t register.”

Minor slip ups in communication can have major repercussions, as any sensitive manager knows. Lack of communication between you and others in your company can not only foul up job assignments and raise the cost of doing business, it can also cause hurt feelings and generally lower morale.

Listening is an art that requires work, self-discipline, and skill. The art of communication springs as much from knowing when to listen as it does from knowing how to use words well. Ask any good salesperson or negotiator about the value of silence. He or she will tell you good listeners generally make more sales and better deals than good talkers.

To sharpen listening skills, you need patience and practice. Here are some suggestions that have helped others become better listeners:

1. RESIST THE TEMPTATION TO MONOPOLIZE CONVERSATION.

If you like to dominate a situation or feel you know everything there is to know about a subject, you’re probably a poor listener. Remain open to new ideas instead of impatiently waiting for a chance to butt in with what you think is the final word on the subject. Before you speak, make sure that the speaker has had a chance to make his point.Many people think aloud and tend to grope toward their meaning. Their initial statements may be only a vague approximation of what they mean.

2. AVOID JUDGING THE SPEAKER TOO SOON.

Good listeners try not to become preoccupied with a speaker’s mannerisms or delivery. Instead of thinking, for instance, “What a monotone this guy has,” ask yourself, “What’s in the message that I should know?” or “What can this add to my knowledge and experience?”

When we decide that what a speaker has to say is boring or useless, we frequently pretend to listen. It’s usually quite easy for an attentive listener to recognize that our “uh-huhs” are really “ho-hums.” When he does, his thinking is likely to become confused, he may get annoyed, and his delivery will probably deteriorate.

Attentive listeners remain alert and maintain eye contact. Simple gestures – nodding, raising the eyebrows, or leaning forward – all can convey interest. Occasional comments, such as “I see,” “That’s interest,” or “Tell me more about that,” if said with genuine interest, can go a long way toward reassuring the speaker.

4. LISTEN FOR IDEAS, AS WELL AS FACTS.

When we listen, we tend to get bogged down trying to retain the facts and we miss the ideas behind them. For example, when a person starts running through a list of seven points, the listener immediately begins mulling over the first point, trying to remember it. Meanwhile, point two is being explained. How he’s preoccupied with two facts and is apt to miss the third point altogether. So it goes through point seven: some facts retained, some missed, and others confused. Instead of getting lost in a string of disassociated fragments, make an effort to understand what the facts add up to by relating them to each other and seeing what key ideas bind them together.

5. BE ALERT TO NONVERBAL CLUES OR “BODY LANGUAGE.”

Try not only to listen to what is said but also to understand the attitudes and motives that lie behind the words. Also remember that the speaker does not always put his entire message into words. For example, there is sometimes considerable difference between the auditory cues and the behavioral cues emitted by the speaker. While his verbal message may convey conviction about a new idea or proposal, his gestures, posture, facial expressions, and tone of voice may convey doubt and lack of enthusiasm.

6. USE THE SPEED OF THOUGHT PRODUCTIVELY.

Because we usually think three to four times faster than we talk, we often get impatient with a speaker’s slow progress, and our minds wander. Try using the extra time by silently reviewing and summarizing the speaker’s main points. Then, when he’s finished, you can restate the points and ask the speaker if you’ve understood the message. Questions such as “Is this what you mean?” or “Do I understand you correctly?” are not only supportive because they show your interest, they also reduce the chance of misunderstanding later on.