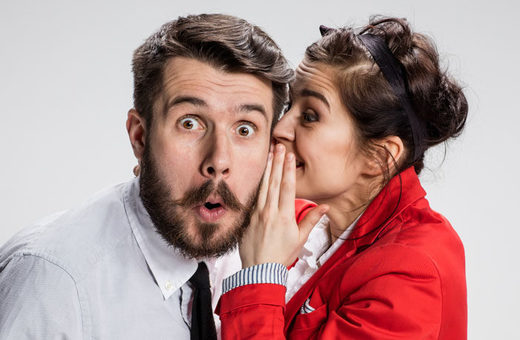 New research in the journal Emotion suggests that people are highly influenced by gossip, even when it is explicitly identified as untrustworthy. The findings indicate that qualifiers such as “allegedly” do little to temper the effects of negative information on a person’s likeability.

“Words and phrases like ‘apparently’, ‘allegedly’ or ‘is suspected of’ are frequently used in daily communication, in social media and in media coverage about people, in order to signify the questionable veracity of information. These terms even serve a legal purpose and are intended to prevent false accusations, prejudgments and defamations,” said study author Julia Baum of Humboldt-Universität zu Berlin and Berlin School of Mind and Brain.

“Until now, however, little has been known about how our brain processes verbally communicated person-related information of dubious reliability and how this affects our judgments. Do we consider the uncertainty of information in order to temper our judgment about a person, formed on the basis of negative statements, and to prevent misjudgements?”

In two experiments, with 56 German participants in total, the researchers found that the judgment of people was strongly influenced by positive or negative information, even if that information was presented as uncertain.

During subsequent person judgments, the researchers recorded the brain activity of participants using an electroencephalogram. They were particularly interested in two neurophysiological markers called the Late Positive Potential and the Early Posterior Negativity, which are both associated with emotional processing.

“The experiments show that we tend to judge people on a strongly emotional basis, even if this judgment is knowingly based on unreliable evidence. Therefore, we should be aware that verbally marking information untrustworthy (‘allegedly’) does not seem to have the desirable consequences of preventing prejudgments or defamation,” Baum told PsyPost.

“Similarly to situations in real life, the experiment participants were not explicitly asked to actively suppress the emotional content or to consciously consider the effects of rumors. Instead, the participants were free in their decision to use the indications relating to the questionable reliability of the information in order to put their judgments into perspective.”

“Future studies should examine the circumstances in which the unreliability of person-related information is considered in order to regulate our emotional responses and judgments,” Baum said.