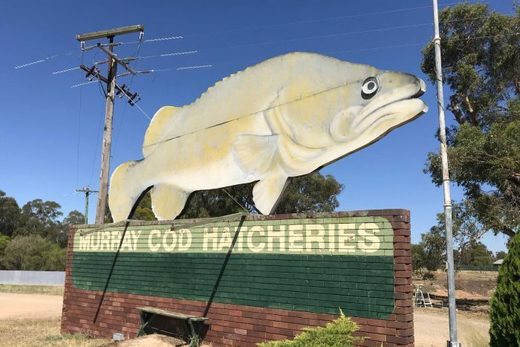 Defence’s investigations have only considered whether a risk of exposure to PFAS existed for animals in contaminated areas, not what that exposure could do to them.

“The ecological risk assessment is screening only and does not seek to assess potential effects of PFAS on specific species,” a Defence spokesperson said.

Since 2017, Mr Semple has worked with engineers and scientific researchers contracted by the Department of Defence to test the extent of PFAS contamination in the water used at Murray Cod Hatcheries.

He had PFAS levels in his aquatic animals tested by the contractors and found levels in their flesh to be up to 103 times that considered the assumed safe standard for eating fish in Australia.

The groundwater was found to have 65 times the amount of PFAS toxicity currently considered acceptable for Australian drinking water and the PFAS readings in some of the surface water were 101 times the provisional assumed safe levels for agricultural use.

Other detailed water testing completed in 2017 also found there was no significant level of any other environmentally toxic chemical at the fish hatchery.

The Department of Defence has said the PFAS concentration detected in water at the Murray Cod Hatcheries were the highest detected in off-base locations as part of their investigations in Wagga Wagga.

“However, it’s important to note that Defence has been advised that the surface water in the ponds and the groundwater bores at Murray Cod Hatcheries are not currently used as a source of drinking water,” a Defence spokesperson said.

“The Human Health and Ecological Risk Assessment did not identify unacceptable exposure risks from incidental contact with water at the hatcheries.

“Incidental contact may occur when washing hands or wading in the pools for maintenance activities.”

But Mr Semple said the advice given to him by Defence, the NSW Environmental Protection Authority, and the Department of Health escalated following the water testing.

“At first I was told not to drink or use the bore water or to eat foods produced or washed in it,” Mr Semple said.

“Then I was told to avoid contact with the water altogether.

“It’s a bit hard to run a hatchery when you can’t touch the water.”

Eliminating the toxins is possible

A spokesperson for the Department of Defence said placing fish in clean water could eliminate PFAS concentrations from their systems.

“The Human Health and Ecological Risk Assessment refers to published studies of PFAS depuration in various fish and crustacean species and notes that when placed in clean water, the time taken to remove PFAS from their systems ranges from hours to weeks depending on the species,” they said.

“The assessment indicates that there should not be any exposure risks in relation to consumption of fish and crustaceans, assuming these were placed in a PFAS-free environment for at least two weeks.

“Depuration studies on the species produced at the Murray Cod Hatcheries would be needed to confirm actual depuration rates.”

Mr Semple had not attempted depuration of his fish but said the process would take much longer than two weeks.

“The only freshwater fish studied in detail have been American bluegill sunfish and studies with that species found depuration of PFAS concentrations from the flesh takes 152 days,” he said.

“The PFAS levels found in some of the native fish at Murray Cod Hatcheries were around 103 times the safe level so, if you apply the American findings, it would take in excess of eight years of depuration for them to reach an assumed safe level.”

Mr Semple conducted his own controlled fish breeding trials in 2008 and 2017 using perch larvae supplied by the NSW Department of Primary Industries.

“The larvae held in Murray Cod Hatcheries’ surface and bore water died within days,” he said.

“The birth defects and diminished fish stocks and reproductive capacity mirrored the scientific findings published overseas on fish and ecosystems exposed to PFAS concentrations, even those with far lower levels than found here.”

The University of Melbourne’s Dr Ian Rae said the impacts described at Murray Cod Hatcheries were “classic symptoms of poisoning with PFAS”.

“These are developmental toxins so they don’t actually kill organisms in the way some toxins do but they ruin their development, which means they may not have eggs or the eggs may be at a very low concentration or they may be deformed in some way,” Dr Rae said.

“And when new fish are born, they may have serious developmental problems, their organs may not be properly developed or there may be a very low yield of new fish.

“Given the evidence from the hatchery, I think it’s a classic example of PFAS poisoning.”

Julie Mondon, an associate professor of aquatic ecotoxicology at Deakin University, agreed that PFAS contamination was likely to be to blame for the abnormalities reported at the hatchery but added that it was difficult to prove a clear cause-and-effect.

“Without the benefit of knowing what other pollutants have been present prior to the 2017 findings, it can’t be definitively claimed that PFAS has been responsible,” Dr Mondon said.

“However, there is a strong weight of evidence suggesting that the presence of the suite of chemicals detected in 2017 and the concentrations at which they were detected, both in the environment and in the fish, would correlate with the significant health issues evident.

“Secondary fins and severe spinal curvature in the fish, in particular, are indicative of chemical toxicity response.

“This is not an unusual characteristic of these types of chemicals but often not well-documented due to the time involved in assessing one generation’s response through to the next.”

Dr Mondon also said the abnormalities were occurring at a much higher rate than would normally be expected in a fish breeding environment.

“In an aquaculture breeding program, it is expected that some abnormalities across the population might occur, not necessarily spinal curvature, but at a very low percentage and certainly not to the extent described by the owner of Murray Cod Hatcheries,” she said.

“If a significant number are showing gross deformity then chemical poisoning is the most likely culprit causing these mutations.”

Both experts agreed that it was also possible that chemical contamination might be responsible in the case of the cattle, horses and goats around Mr Semple’s property.

“The bodies of those animals are quite different and will manage the toxins better than fish, but there’s still likely to be effects,” Dr Rae said.

“Still, I don’t think Mr Semple needs to go on doing any more experiments. There’s enough evidence there to be satisfied that these chemicals are the cause of the problem.”

Mr Semple was still a long way from taking any official steps towards remediation for his estimated $120 million loss.

“This was one of the best hatcheries in the country and now we’re out of commercial operation,” he said.

He said he was waiting for the Department of Defence to publish its PFAS Management Area Plan for Wagga RAAF Base, due in the coming months, which will outline the department’s plan to manage, monitor and reduce the risks of PFAS exposure at and around the base.

“I’m waiting to see if the government will accept the nine recommendations proposed in the parliamentary inquiry into the management of PFAS contamination before taking further action,” he said.

“But how do you compensate for half a person’s working life?”

A Defence spokesperson said the Department would welcome a claim from Mr Semple, if he believed “the Commonwealth is liable” for his losses.