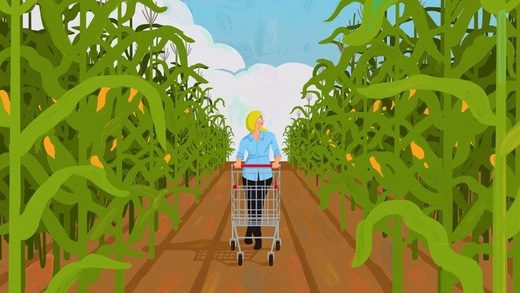 When Christine Robinson was first diagnosed with a corn allergy 17 years ago, she remembers thinking, “No more popcorn, no more tacos. I can do this.”

Then she tried to put salt on her tomatoes. (Table salt has dextrose, a sugar derived from corn.) She tried drinking bottled iced tea. (It contains citric acid, which often comes from mold grown in corn-derived sugar.) She tried bottled water. (Added minerals in some brands can be processed with a corn derivative.) She ultimately gave up on supermarket meat (sprayed with lactic acid from fermented corn sugars), bagged salads (citric acid, again), fish (dipped in cornstarch or syrup before freezing), grains (cross-contaminated in processing facilities), fruits like apples and citrus (waxed with corn-derived chemicals), tomatoes (ripened with ethylene gas from corn), milk (added vitamins processed with corn derivatives). And that’s not even getting to all the processed foods made with high-fructose corn syrup, modified food starch, xanthan gum, artificial flavorings, corn alcohol, maltodextrin-all of which are or contain derivatives of corn.

“It’s such a useful plant,” Robinson says of corn. “It can be made into so very, very many things that are, from my perspective, trying to kill me.”

Corn allergies are relatively rare, and ones as severe as Robinson’s are rarer still. (Many people unable to eat whole corn can still tolerate more processed corn derivatives.) But to live with a corn allergy is to understand very intimately how corn is everywhere. Most of the 14.6 billion bushels of corn grown in the U.S. are not destined to be eaten on the cob. Rather, as @SwiftOnSecurity observed in a viral corn thread, the plant is a raw source of useful starches that are ubiquitous in the supply chain.

It’s not just food. Robinson told me she is currently hoarding her favorite olive-oil soap, which she had been using for 17 years but recently went out of stock everywhere. (A number of soap ingredients, such as glycerin, can come from corn.) She’s been reading up on DIY soap making. A year ago, the brand of dish soap she liked was reformulated to include citric acid, so she had to give that up, too. And navigating the hospital with a corn allergy can be particularly harrowing. Corn can lurk in the hand sanitizer (made from corn ethanol), pills (made with corn starch as filler), and IV solutions (made with dextrose). A couple years ago, she went to see a specialist for a migraine, and her doctor insisted she get an IV that contained dextrose.

“And while in the midst of a migraine I had to argue with a doctor about the fact [that] I really could not have a dextrose IV,” she said. In the moment, she realized how absurd it was for her to be telling a world-class specialist to change her treatment.

Because corn allergies are rare, many doctors are not familiar with the potential scope. Robinson said she was the first case her original doctor had ever seen in 38 years of practice, and he didn’t know to advise her against corn derivatives. Even official sources of medical information can be confusing, telling corn-allergy patients that they do not need to avoid cornstarch and high-fructose corn syrup. Misinformation abounds in the other direction, too, because corn allergies can be easy to misdiagnose and easy to self-diagnose incorrectly. All this means that corn-allergy sufferers encounter a good deal of skepticism. But Robert Wood, president of the American Academy of Allergy, Asthma & Immunology and a pediatric allergist at Johns Hopkins, told me that derivatives such as corn syrup can indeed cause problems for certain people.

People with corn allergies have naturally been finding one another on the Internet. A Facebook group called Corn Allergy & Intolerance (Maize, Zea Mays) now has nearly 8,500 members. Becca, a tech worker in Washington State, writes a fairly prominent blog called Corn Allergy Girl. (She asked I not use her last name because she doesn’t want her health status to affect her professional life.) The blog collates years of Becca’s research into corn allergies, as well as resources inherited from other, now-defunct corn-allergy blogs.

Members of the Facebook group have also forged ties with individual farms. Once a year, Robinson said, a farmer in California sends members of the group a big box of avocados that have not been exposed to corn-derived ethylene gas or waxes. “It’s a great month when you’re trying to get through all of them,” she said. For the rest of the time, she gets most of her food from a CSA with a local farm in Pennsylvania.

Becca, who writes Corn Allergy Girl, also gets a lot of her produce from local farms. The rest she grows. She goes to a specific butcher and meat processor who will custom-process whole animals for her without using lactic acid or citric acid. She has two fridges and several freezers to store food for the winter, when fresh vegetables are less abundant. “I go all Little House on the Prairie on the weekend,” she said, “pickling things and shredding them and baking them.” She counts herself lucky to live in the Pacific Northwest, where there are many organic, local farms. It’s harder to find fresh food in many other parts of the country, and it’s much harder to do so on a budget. “Your dollars just don’t go as far as if you’re getting a bunch of Chef Boyardee. It’s very cheap to eat canned, preserved food,” Becca said. She had to run GoFundMe campaigns, for example, for friends who couldn’t afford to buy chicken from a source they can tolerate.

The diet of someone with a severe corn allergy is in some ways the ideal diet for a certain type of foodie: fresh, local, free of preservatives and processed foods, the provenance of every ingredient intensely cataloged. It’s just not exactly by choice.

Knowing how to avoid foods with corn is one thing; knowing how to navigate social situations where danger lurks in every corner is another.

Robinson said that she has two rules when eating out with friends now. First, eat beforehand. Second, order a San Pellegrino and an appetizer for the table to share, which deflects the inevitable concern from the waitstaff. “They’re nice, but people really feel they can find something, and they try. You have to keep saying, ‘No, I can’t, I can’t,’ and everybody feels bad.”

Cassandra Wiselka, whose 5-year-old is allergic to corn, has written about the problem of Halloween. Virtually all mass-produced candy contains high-fructose corn syrup. Her son still goes trick-or-treating, but she switches out the candy he collects with corn-free alternatives: lollipops, gummy bears, and “fancy expensive chocolate that we don’t even buy for ourselves.” She makes and freezes big batches of corn-free cupcakes and pizza to bring to birthday parties. It’s hard, she says. “He still gets upset at birthday parties and things where he has to have his own special food.” They recently had to turn down a birthday party that was moved to a pizza place at the last minute because they didn’t have time to make safe pizza to bring.

Wiselka’s family moved from Germany to California when her son was 18 months old. He seemed to get worse after the move. It’s hard to say exactly why, but Wiselka noticed that “in Germany, things are a lot less processed, food-wise. At least not processed as much with things like corn.”

The one thing Robinson told me she really misses is being able to travel without worry. She did make a trip to Hawaii recently, after much advance planning. She picked Hawaii for the scuba diving. When she dives, she has to watch out for a few specific things-that her wetsuit has not been washed with a corn-containing detergent, that her dive partners have not been eating corn chips. But once she’s in the water, she’s calm. Sure, scuba diving can kill you if you aren’t careful (the most recent data show that 40 to 50 people die while diving in North America every year), but she can be sure there is no corn in water.

“You don’t realize you’re carrying around this extreme sense of alertness,” she said. “That level of hyper-vigilance that you have for things that you could touch or breathe in is gone. You’re breathing air that you know is safe and you know the actual oxygen content of. It’s just incredibly freeing.”