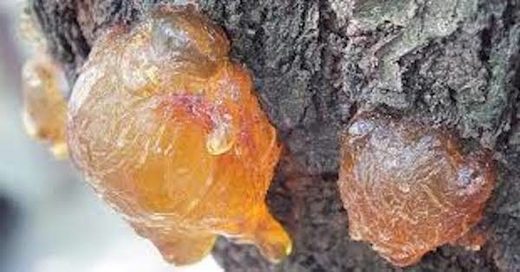 Trees have been among our greatest allies since ancient times. They play a very important role in the production of oxygen and the absorption of carbon dioxide from the environment. Trees have also become a source of wood, paper, and other materials used in our everyday lives.

However here is another fact that many are not aware of – trees deserve a place among our lists of potential natural remedies. We tend to think of herbs as small leafy plants nestled between rocks in a herb garden. But herbalism encompasses all varieties of plants. The thousands of species of trees offer us a fantastic array of therapeutic potential.

Some famous remedies are made from trees. Taxol – the cancer medicine – is made from the Yew tree. We also have essential oils made from trees – such as eucalyptus, sandalwood, cedarwood, cypress and so on.

Tree resin is a defensive barrier secreted by a tree to protect itself from insects and pathogens. Hence it is logical that it will be an excellent remedy for preventing infections; it has natural antimicrobial properties – properties that protect the tree and can apparently protect humans too. Different studies have been published over the years that focus on the ability of resin from various trees in fighting pathogenic microorganisms.

In an astonishing study, Wilson, et. al. in 2013 found that tree resin harvested by honey bees showed significant antimicrobial properties and was able to fight off a bee bacterial pathogen called Paenibacillus larvae. While Wilson’s study focused on the bee and its ecosystem, the study’s results indicate tree resins’ antimicrobial ability – which may be applicable to the human environment. [1]

A few years back in 2008, dos Santos published a study on different tree oils and how they tested against gram-positive and gram-negative bacteria, yeast, and dermatophytes. Among the oils included in the study was resin oil and it was tested against Staphylococcus aureus. The resin oil was able to cause lysis or breakage in the bacteria, indicating that it is an effective treatment against that microbe. Staph infections are very common and can cause respiratory tract and skin problems. [3]

An unconventional use of tree resin was the focus of da Silva’s study published in 2015 in The Journal of Pharmacy and Pharmacology. The researchers used oil-resin from a tropical rainforest tree and found that it exhibited in vitro cell death in endometriotic stromal cultures, which is found in cases of endometriosis. The study suggests that using tree resin can be a novel approach to managing this gynecological condition. [4]

It’s advisable to treat tree resins as you would treat any other essential oil. They should not be ingested, and should be diluted before skin application. Resins can sometimes be collected from coniferous trees such as pines when the resin oozes from the tree and drips down.

There are many sources of tree resin all over the world – however the best website we have found (no affiliation) is Pruitt’s Tree Resin. Check out their fascinating history page and their store for natural healing products made directly from the trees.