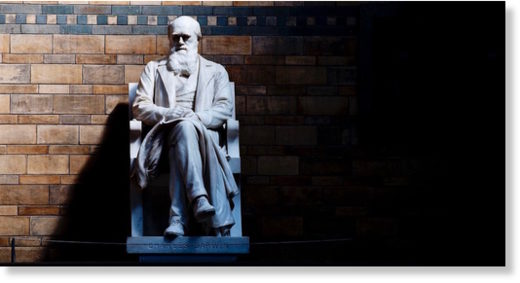 Or think of a giraffe: perhaps by some random mutation, the neck of one animal gets a tiny bit longer. Does this help it better reach its food? Maybe on some very rare occasions. But if it’s a weak giraffe to boot, this won’t help. And again, this won’t help a bit against the myriad of other threats. How, then, should it ‘pass on its genes’ better than other giraffes?

All we ever get from Darwinians is wild speculation, often using misleading language such as ‘giraffes needed to reach higher trees, therefore they evolved their long necks’, as if the collective mind of the giraffe-species somehow decided it would be a good idea to ‘evolve’ a long neck. And perhaps that’s really how it happens, who knows? But of course, this isn’t at all what Darwinism proclaims. For a prime-example of the nonsensical drivel Darwinian thinking produces, read this article from the New Scientist about the giraffe’s long necks, culminating in the ‘explanation’ that ‘Girls like them long’. When you find yourself resorting to schoolyard humor to convince your audience, you know you are in the presence of ‘high science’.

There might be some cases where such scenarios could work, but you get the point: a random mutation that miraculously produces something slightly beneficial and is then somehow magically preserved or ‘selected’ is massively improbable. A whole lot more needs to happen. The signal of the tiny piece of new information, should it even manifest, would be drowned out in a sea of noise: namely the vast majority of scenarios where this specific, tiny advantage doesn’t help one bit.

Rather, the way variation and selection seems to work in cases like the giraffe is this: a population has a range of variation for a particular trait, e.g. beak size, in the case of Darwin’s famous finches. New conditions favoring a long beak will cause those with beaks too short to die, and new generations will tend to have a larger number of these long beaks – because there are already enough individuals with the now optimal beak length. But nothing new has been created. New finch species might have smaller or larger beaks, but they all fall within the initial range. An abnormally long beak – or neck in the case of the giraffe – requires multiple additional new traits to make it work, and they must all come together at the same time. Naturally, this only compounds the problem described above.

Now, what does this all mean? Just this: that our initial argument is valid. There must be some kind of information coming from somewhere to explain how you get from no life to the first life form and from primitive life to the incredibly complex life forms we observe today. And however this works, it cannot work as Darwinism claims. This also means that materialism is in serious trouble: because materialists proclaim, after all, that the whole universe consists of nothing but dead matter floating around, obeying the physical laws but nothing else. In that view, there is no pre-existing information that could save the day; no plan, no purpose, no guidance, no intelligence, no infusion of information. Remember, to defend this position was the whole point of Darwinism! If Darwinism goes out of the window, so does materialism, unless someone can explain how a universe of dead matter obeying the natural laws can produce information in the form of a code. So far, no one has been able to do so, because it is physically and mathematically impossible.

Now, religious folks will be quick to claim that God is the answer. And that may be the case. But there are other options, including a view of the Cosmos as a living system where information reigns supreme. Where minds, not matter, are the real ‘movers and shakers’. Or even where this distinction must be given up altogether: where matter is an active part of a greater mind and all is connected and mutually exchanging information. But let’s stop here for the time being, and I hope to see you in the next part of this series!