Kids are missing out on climbing trees 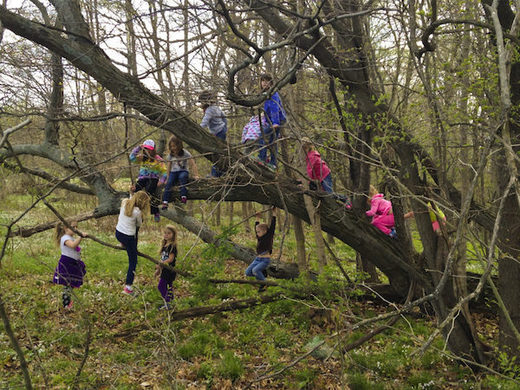 Kids are missing out on climbing trees

As long as I can remember, my girls have climbed trees. Skinny trees, big trees, crooked trees, straight trees, old trees, young trees, pine trees, deciduous trees… They’ve climbed trees in snow suits in the winter and barefoot in the summer. On more than one occasion, they’ve climbed trees wearing princess dresses. And you know what? Sometimes I join them on their tree climbing missions. (Minus the Disney dresses, that is…)

For my generation, tree climbing was a quintessential childhood experience, on a par with running under the sprinkler on a hot summer day and skinning your knees when riding your bike just a tad too fast on a gravel road. But today, it isn’t a given activity for many kids, and for a number of reasons. For one, we all know that they spend more time indoors on electronic devices, which leaves less time to romp around in the woods in the first place. Parents and caregivers also worry more about the safety of tree climbing and many simply don’t allow it. (A study by Play England showed that as many as half of all British children have been stopped from climbing trees.) In some cases, home owners associations or neighbors complain about kids climbing trees because they think it’s a nuisance, and in more than a few places, tree climbing is banned altogether.

And the kids are missing out.

I’m not saying that out of nostalgia. Tree climbing has real benefits for kids – physically, mentally, cognitively and socially. Just think about it. As your child scales the tree he’s building muscle strength, practicing gross motor skills such as balance and improving spatial awareness and proprioception (the awareness of your body’s position and movement, sometimes called the sixth sense). When he decides which branches are safe to stand on and how high to go, he’s learning how to judge risk and developing critical thinking skills. As he plans his path up through the limbs, he’s gaining decision-making and problem-solving skills, and if things don’t go according to plan, he gains emotional strength and resilience by trying again. When he successfully negotiates the branches, he feels a sense of accomplishment, which in turn boosts his self-confidence. Once in the tree, he lets his mind wander and engages in imaginative and creative play – maybe pretending to be a pirate on a ship or a monkey in the jungle. If he’s got friends with him, chances are they’ll join him, nurturing his social skills. As he feels the rugged bark against the palms of his hands and listens to the leaves ruffle in the wind, he connects with nature on a deeper, subconscious level. Most importantly – he’s having fun!

But what if he falls?

Surprisingly little data is available on accidents related to kids climbing trees, but statistics from the U.K. showed that in 2007, children were nearly three times as likely to be admitted to the hospital after falling out of bed than after falling from a tree. In 2016, researchers from University of Phoenix surveyed 1,600 parents who let their children climb trees and found that the most common injury by far was scraped skin. Only 2% of the parents responded that their child had broken a bone and even fewer had suffered from a concussion. Meanwhile, more than 3.5 million American children under the age of 14 receive medical treatment for injuries from organized sports every year.

Besides, what is often forgotten in today’s fear-driven culture is that risky play like tree climbing isn’t just completely normal for kids, it’s absolutely necessary for normal development. Psychologist Peter Gray, who is a thought leader on risky play, goes as far as saying that the decline in children’s play has contributed to a massive increase in mental disorders among young people the past decades.

“The story is both ironic and tragic,” Gray writes.

“We deprive children of free, risky play, ostensibly to protect them from danger, but in the process we set them up for mental breakdowns. Children are designed by nature to teach themselves emotional resilience by playing in risky, emotion-inducing ways. In the long run, we endanger them far more by preventing such play than by allowing it.”

I know from experience that allowing risky play can be hard, because we’re wired to protect our progeny. That parental instinct is a good thing, until it turns into irrational fear of things that are actually healthy for our kids. Just like researchers believe being overly clean can cause the immune system to turn on itself and increase the risk of asthma and allergies, keeping kids overly safe can make them less able to manage risk and regulate their emotions.

But let’s face it: even for parents who know the benefits of risky play and embrace it, it can be hard to stay totally cool when your child disappears 15 feet up into a tree. That’s why, as we head out into the woods, we need to remember that it’s our kids’ job to push their boundaries. Sometimes, them climbing a tree can make us feel nervous and uncomfortable, but that doesn’t mean they aren’t safe!