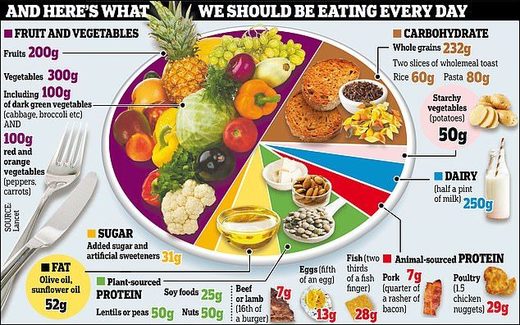 The World Health Organization has backed out of sponsoring an event promoting a radical diet that drastically cuts back on meat.

The UN body planned to support the launch event of the scientific group behind the controversial ‘planetary health diet’, dismissed as ‘nanny-state’ madness.

Scientists say its adoption is vital to feed the world’s booming population without destroying the environment and would improve the health of millions.

But the WHO stopped sponsoring the event following criticism there is ‘no scientific justification’ for everyone in the world to adopt a standard diet.

The British Medical Journal first reported the WHO had dropped out of the EAT-Lancet Commission on Food, Planet, Health event in Switzerland.

The event – promoting a diet first announced in a report in January – still went ahead in Geneva at the end of March. It was sponsored by Norway’s government.

It is unclear what prompted the body to pull its sponsorship, however, the views of Italy’s ambassador to the UN may have played a role.

Gian Lorenzo Cornado penned a letter to the WHO which questioned whether the agency should back the global push for countries to encourage the diet.

In a scathing attack, he argued that it could cause millions of people working in the agriculture industry to lose their job, as well as other food areas.

Mr Cornado also warned that the global shift to a plant-based diet could spell an end to traditional cuisines across the world.

He added, in a letter seen by the BMJ, such a move also risked the ‘total elimination of consumers’ freedom of choice’.

And he said the plant-based regime ‘is also nutritionally deficient and therefore dangerous to human health’ – despite evidence of the dangers of red meat.

The WHO told the BMJ that its director of nutrition – a commissioner of the EAT-Lancet group – was still a panellist at the EAT-Lancet Commission event.

But a statement said: ‘[His] views and opinions are expressed in a personal capacity and do not necessarily reflect official WHO positions.

‘WHO considers the Geneva launch event and the EAT-Lancet Commission to be relevant to advance WHO’s work on healthy diets.’

Dr Aseem Malhotra, an NHS cardiologist, told MailOnline: ‘I congratulate the WHO for pulling support from this unscientific plant-based initiative.’

Two authors of the EAT-Lancet Commission argued their report ‘offers the most up-to-date scientific evidence for healthy diets’.

And they said that ‘nowhere’ in the controversial report, first published in prestigious journal The Lancet, is the centralised control of diet mentioned.

The EAT-Lancet Commission is running several events across the world in hope of promoting the move to plant-based diets.

Its report suggested countries could, in future, adopt laws, subsidies and penalties to help them stick to the diet and help save the planet.

The planetary diet, widely ridiculed at the time of its announcement, would mean a radical shift away from meat, sugar and dairy to vegetables, beans, nuts and pulses.

Experts say this would prevent around 11million early deaths around the world by 2050 by slashing obesity, heart disease and type 2 diabetes.

But the diet would see people eating just 7g of pork, beef or lamb a day – the equivalent of a quarter of a rasher of bacon or a 16th of a burger.

Average consumption of red meat in Britain would have to drop by 77 per cent from its current 62g a day, according to the report drawn up by 37 experts from 16 countries.

Dairy and butter intake would be cut by 40 per cent to just 250g – the equivalent of half a glass of milk, a slice of cheese and a small knob of butter.

The consumption of eggs would fall to a fifth of an egg a day, sugar intake would drop by half to just 31g a day and potato intake by three-quarters to 50g.

But people following the planetary diet would have to eat three times as much vegetables, beans, nuts and soya to make up the calories.

Its authors stress that the world population is expected to reach ten billion by 2050, and Earth has finite resources for food production.

They say a billion people are already malnourished, and another two billion are eating too many of the wrong foods.

Previous studies have shown meat uses 83 per cent of the world’s farmland while providing only 18 per cent of calories.

Dr Walter Willett, of Harvard Medical School, one of the lead authors of the report funded by the Wellcome Trust, said in January that the diet is achievable.

He added: ‘We are not talking about deprivation to do this. We are talking about a way of eating which can be enjoyable and flavourful.’

Dr Willett added the diet may seem small to people in the US and UK – but not to people in a ‘very large part of the world’ who eat that much meat every day.

Professor Tim Lang, of City, University of London, also said: ‘The food we eat and how we produce it determines the health of people and the planet.

‘And we are currently getting this seriously wrong. We need a significant overhaul, changing the global food system on a scale not seen before.’

But Christopher Snowdon, head of lifestyle economics at the free market Institute of Economic Affairs, said: ‘They say ‘You are what you eat’ and that must be true because this is nuts.

‘Most people will look at these demands and laugh, but I welcome this report because it reveals the full agenda of nanny-state campaigners.’