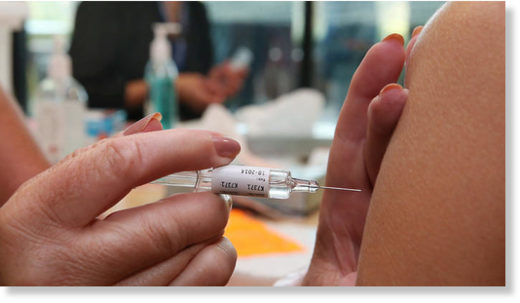 As health officials prepare to promote flu season jabs for West Australians, new figures show only half of all health workers caring for our sickest patients get vaccinated.

Department of Health figures show that 50.4 per cent of nurses, doctors and other health workers were vaccinated last year against the deadly influenza virus.

That figure was only 4.8 per cent higher than in 2017 despite an effort by health bosses to increase the rate through an initiative to force workers to “actively decline” vaccinations.

The new rules meant that any workers refusing to be vaccinated had to explain why they were declining.

But despite the poor coverage, DOH bosses are refusing to consider compulsory vaccinations.

The Federal Government last year made it compulsory for residential aged-care facilities to provide vaccinations for all workers. The new rule didn’t make the flu jab compulsory

University of Notre Dame pro vice chancellor Professor Selma Alliex said the Fremantle campus was making it compulsory for all health students to be vaccinated this season.

Prof Alliex said the priority should be for patients to be protected, rather than students practising a choice of whether to be vaccinated.

She said staff would also be offered free vaccination for the first time this year.

“I’m surprised that the coverage for WA’s healthcare workers is so low (at 50.4 per cent) when it’s common sense for vulnerable people in our hospitals not to be exposed to infection,” Prof Alliex said.

“The priority should be on the patients’ health but the situation we have is that vaccination is still viewed as a personal choice.”
People are being urged to wait until late May or early June before getting the jab so that the vaccination is potent throughout the flu season.
More than 1400 cases of the flu have been diagnosed in Perth in the past eight weeks, almost double the number of this time last year and three times more than in 2017.

Medical authorities are hoping more than 11 million Australians will get the flu shot before winter.

The Federal Government is offering free flu shots for the over 65s, indigenous people aged over six months and people with certain medical conditions.

Pregnant women are also eligible for a free flu vaccine.