SOTT FOCUS: Objective:Health #13 – The Anti-Human Agenda and the Children of the Quorn 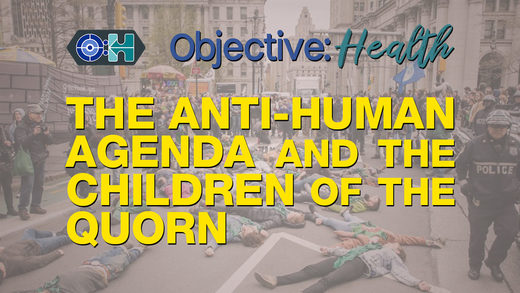 SOTT FOCUS: Objective:Health #13 – The Anti-Human Agenda and the Children of the Quorn

Does “extinction rebellion” ring a bell? It should because this “rebellion” is not against – but for – the extinction of humanity. Sound crazy? That’s because it is.

We’ve just come through International Workers’ Day, a holiday with leftist origins meant to celebrate the work of the working class, the unsung heroes who keep society functioning despite the constant threat of exploitation.

Yet it seems the left has moved away from protecting the little guy toward oppression from the top down under the globalist guise of ‘saving the planet’. Environmentalism is now the most important issue, stopping climate change its new rallying cry, and the oppression of the lower classes in order to reach environmental goals – no matter how misguided – is the order of the day.

Whether its AOC or Bill Maher expressing anti-natalist sentements, French President Macron trying to impose austerity measures against the people’s wishes to save the environment, George Monbiot telling everyone they need to become vegan and stop air travel (and overthrow capitalism) or a little autistic girl, child of the Quorn Greta Thunberg, telling everyone it’s too late and leading a rabid movement into panicked actions, the Anti-Human agenda has worked its way into the mainstream.

Working towards a better life, “abundance for all”, is now considered a bad thing – we need less abundance, less freedom, less wealth, more austerity and more restraint. As Monbiot cries out – “Bring on the recession!”

Join us for a lively discussion on the origins and character of this anti-human sentiment and how it shapes our current thinking and discourse.