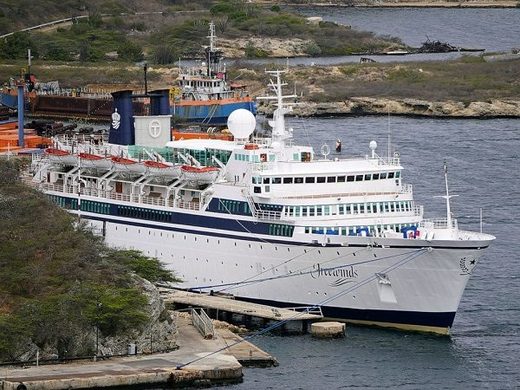 Hundreds of crew members and passengers aboard the Church of Scientology cruise ship Freewinds must remain under quarantine in the Caribbean until blood samples come back negative for measles, a health official in the ship’s home port of Curacao told ABC News.

The ship, carrying a female crew member who had tested positive for measles but is now healthy, had been quarantined in St. Lucia before arriving in Willemstad, Curacao, Saturday morning, at which point its 216 crew members and 102 passengers were again prevented from disembarking, according to Izzy Gerstenbluth, the head of the Epidemiology and Research Unit at Curacao’s Ministry of Health.

On Saturday, a team led by Gerstenbluth — an epidemiologist and public health physician leading Curacao’s response — boarded the ship and spent the day interviewing passengers and crew members. The team gathered documentation from those who could prove they had been previously vaccinated or were immune to the disease from a prior diagnosis.

At least 31 crew members and 10 passengers were able to provide proof, while health officials took blood samples from 277 people and sent them to the Netherlands to test for measles, Gerstenbluth said.

Those test results are expected to arrive on Wednesday at the latest. Curacao officials will then consult with health authorities in the Netherlands and the Pan American Health Organization as to whether passengers and crew may disembark, according to Gerstenbluth.

Until then, everyone must remain in quarantine, he said, adding that the mood on board was positive.

The Freewinds is described on its website as “a religious retreat that marks for Scientologists the pinnacle of their journey to total spiritual freedom.” No one has been allowed to leave the ship since Tuesday, when it docked in St. Lucia and authorities there said a possible case of the measles was on board.

The next day, an unnamed crew member tested positive, and St. Lucian authorities quarantined the ship until it left Thursday night.

The crew member, who had traveled in Europe before boarding the ship last month, has since recovered, Gerstenbluth said Monday.

“The irony is she’s probably the safest on board,” he said.

Because of the measles case, the Freewinds cancelled a planned stop in Dominica, according to an official there, and nixed a departure for Aruba it had planned for Sunday night, a person familiar with the situation told ABC News.

The Church of Scientology has not responded to repeated requests for comment from ABC News.