FLASHBACK: Sen. Rand Paul condemns mandatory vaccines: We should not give up our liberty for a ‘false sense of security’ 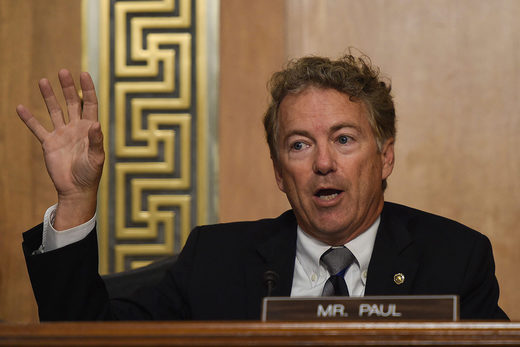 FLASHBACK: Sen. Rand Paul condemns mandatory vaccines: We should not give up our liberty for a ‘false sense of security’

Sen. Rand Paul on Tuesday railed against government-mandated vaccines, suggesting they infringe on personal rights, during a congressional hearing on immunizations’ role in protecting the public from preventable diseases like the current measles outbreak sweeping parts of the country.

Paul (R-Ky.), a doctor, said he and his children are vaccinated and that he believes the benefits of vaccines outweigh the risks. “But I still do not favor giving up on liberty for a false sense of security,” Paul said during the Senate health committee hearing, where he was the only lawmaker to raise doubts over vaccinations.

Paul, who made similar comments during his 2016 presidential bid, argued that vaccines aren’t always effective – pointing to the seasonal influenza vaccines that protect only against certain strands – and said it is “wrong to say there are no risks to vaccines,” drawing applause from anti-vaccination advocates attending the hearing.

Paul’s comments were quickly rebuked by his Republican colleague and a fellow doctor, Sen. Bill Cassidy of Louisiana, who said he knew patients who needed liver transplants because they avoided vaccinations. He and other witnesses pointed out that communities become vulnerable to preventable infections when not enough people have been vaccinated, a concept known as herd immunity.

“If you’re such a believer in liberty that you should not be vaccinated, there should be consequences if you infect others,” Cassidy said.
Lawmakers spent most of the hearing discussing how to educate the public about vaccines and combat misinformation spread online by anti-vaccine advocates. The World Health Organization recently named vaccine skepticism a top global health threat, and some states are pushing to strengthen their vaccine laws amid the measles outbreak.

One witness, Ethan Lindenberger, a high school student from Ohio, discussed how he got vaccinated against his mother’s wishes and said she had been misled about vaccines online.

So far, there have been 201 confirmed cases of measles in 11 states this year, according to the CDC.