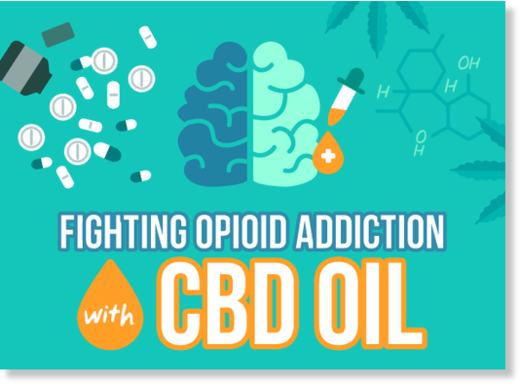 A small study has offered new data on how cannabis-derived cannabidiol (CBD) could help to curb the international opioid crisis.

Results of a study published this week in the American Journal of Psychiatry suggest that CBD could help to reduce the anxiety and cravings experienced by patients recovering from heroin addiction. Researchers reported that CBD may help to dampen signals in the body that trigger cravings and anxiety in former opioid abusers, in addition to lowering patients’ heart rates and levels of stress hormones.

Conducted at Mount Sinai hospital in New York, the double-blind, randomized, controlled study looked at 42 people with a heroin-use disorder who were abstaining from the drug at the time. Participants took either a placebo, a 400 milligram dose of CBD, or an 800 milligram dose at different intervals, allowing researchers to examine the short- and long-term effects of administered CBD. During the study sessions, researchers alternately monitored participants’ vital signs such as heart rate, blood pressure, respiratory rate, and oxygen saturation.

Researchers found that patients who were given CBD exhibited lowered feelings of anxiety or craving when exposed to certain psychological cues, such as videos of drug paraphernalia. Tests of such participants’ saliva also showed lowered levels of stress hormones, and participants’ heart rates were found to be lower than those in the placebo group. Some of these effects were evident in patients up to a week after their final dose of CBD.

Neuroscientist Yasmin Hurd, the study’s first author and director of the Addiction Institute at the Icahn School of Medicine at Mount Sinai, commented in a statement that the results are a further indication that CBD should be considered as a potentially significant option for treating patients recovering from opioid abuse.

“To address the critical need for new treatment options for the millions of people and families who are being devastated by this epidemic, we initiated a study to assess the potential of a nonintoxicating cannabinoid on craving and anxiety in heroin-addicted individuals,” Hurd wrote. “The specific effects of CBD on cue-induced drug craving and anxiety are particularly important in the development of addiction therapeutics because environmental cues are one of the strongest triggers for relapse and continued drug use.”

Hurd also noted that the cannabinoid chemical’s anxiety-reducing capability extends to other kinds of patients, but could offer key relief for patients recovering from opioid dependence. “[This] particular anxiety leads someone to take a drug that can cause them death, and anything we can do to decrease that means increasing the precious chance of preventing relapse and saving their lives.”

In recent years, CBD has been popularly treated as a potential “miracle drug,” in large part because of its ability to stimulate the endocannabinoid system, which maintains balance and function in the body. When this system itself gets out of balance, introducing phytocannabinoids such as cannabis-derived CBD can help to re-balance that system, allowing it to get back to work throughout the body.

It’s also worth noting that subjects in the Mount Sinai study were administered fairly large doses of CBD, which could have cost as much as $50 in the current medical cannabis market, based on typical per-milligram prices. Everyday sufferers of anxiety, pain, and more serious illnesses may use anywhere between 5 and 200 milligrams per day, and numerous researchers believe that in some patients, a lower dose of cannabidiol may be more efficacious than a higher one.

As NBC News reported, Hurd and her team previously studied the effects of CBD and opioid abuse in animals, and after observing a reduced tendency to use heroin in those subjects, they decided to extend their research to human groups.