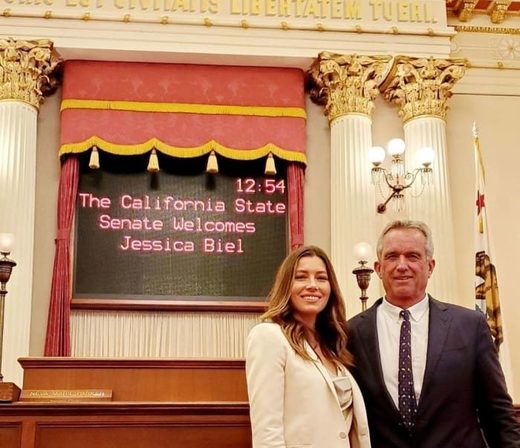 On Wednesday, actress Jessica Biel came out as an “anti-vaxx activist,” as The Daily Beast put it, joining anti-vaccination crusader Robert Kennedy Jr. at the California legislature to lobby against a bill that would make it harder to opt out of vaccinating children for medical reasons. This wasn’t an activity Biel’s publicist highlighted.

Biel and her husband, Justin Timberlake, didn’t comment on her activities at the legislature – though her perceived anti-vaccination lobbying was unpopular in the comments under an unrelated tweet – but Kennedy told The Daily Beast that Biel was an “extremely well-informed” and “very effective advocate.” He described her as “for safe vaccines and for medical freedom,” adding, “She has friends who have been vaccine-injured who would be forced to leave the state.” Biel has not publicly commented on vaccinations, though there were tabloid reports in 2015 that she and Timberlake planned to not vaccinate their children.

Vaccinations are in the news because of a large outbreak of the measles that started in low-vaccination areas around the country, and Kennedy’s relatives have sharply criticized his anti-vaccination advocacy, especially his repeatedly disproved claim that vaccines cause autism.

“A Hollywood celebrity and the head of an environmental organization should not have credibility on an issue about how to regulate the medical profession,” Russin added. “It’s the Jenny McCarthy show all over again.”