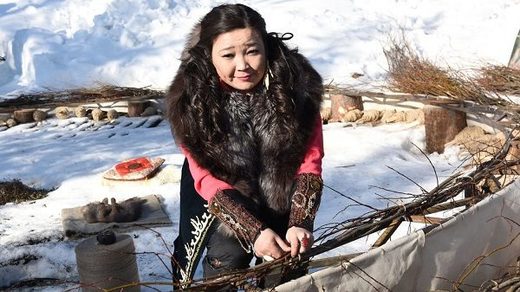 Russia’s Lake Seliger has probably become much safer from evil spirits after a 13-meter-wide dreamcatcher appeared on its shores. The massive shaman-made talisman is slated for the Guinness Book of Records.

Bibigul Mamaeva, an ethnic Kazakh shaman who boasts of being a “direct descendent” of Genghis Khan, has been working tirelessly for almost a week to create the enormous amulet on the shores of the lake, located some 380 km northwest of Moscow.

In a bid to break the record, Mamaeva has created a dreamcatcher 12.63 meters in diameter, using brushwood for the hoop and strained yarn, decorated with beads and feathers, placed on the inside. For comparison, a typical 5-story Soviet block of flats of the Khrushchev era is 14-15 meters high on average.

“I want the world to really start changing. There are a lot of angry people now. It’s an attempt for the people to come together for good.”

It’s yet to be confirmed whether the Guinness Book of Records recognizes the new dreamcatcher as the new largest ever made, but the shaman has already snatched one such record in 2016. Then the baton was passed to Lithuanian artist Vladimir Panarin, whose amulet reached 10.14 meters in size.

A lighthearted video posted on Mamaeva’s Instagram page showed her “preparing to beat the record” while dancing to some suspiciously modern music.

In mass culture, dreamcatchers have become ubiquitous handmade souvenirs, but they’ve been traditionally used by shamans of indigenous peoples for protection from evil spirits, who believed that the bad spirits get stuck in the web created in the yarn, while the good ones make it through the hole in the middle.