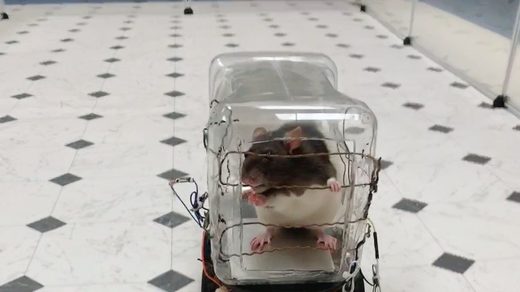 A group of scientists in the US trained rats to drive tiny cars in return for bits of Fruit Loops cereal, and found that both the training and the satisfaction of the task itself reduced the rodents’ stress levels.

While readers may scoff that such research was carried out in the first place, senior author Kelly Lambert of the University of Richmond thinks the investigation could one day improve the development of non-pharmaceutical forms of treatment for mental illness.

The basis for her theory? Neuroplasticity.

Researchers have long been fascinated by the changes in the brain in response to experience and challenges, including stressful situations. They therefore decided to compare groups of ‘stimulated’ rats against their lab-bound counterparts to test their overall stress levels and mood.

Lambert and her colleagues modified a small robot car by adding a plastic food container to the driver cabin, an aluminum floor, and a rudimentary steering mechanism made of copper wire.

Once the rat stood in place and gripped the wire, the circuit was completed and the car began to move in the selected direction. Some 17 such ‘racer rodents’ were trained over the course of several months to drive around a 150x60cm plexiglass arena.

The animals were first taught to drive forward intentionally, before eventually learning more complex manoeuvres. When feces were tested for the stress hormone corticosterone as well as dehydroepiandrosterone, which counters stress, rats that underwent the ‘crash course’ had higher levels of dehydroepiandrosterone, indicating a more relaxed state of mind than their lab-locked compatriots.

The researchers also found that rat drivers had even higher levels of dehydroepiandrosterone than mere passengers, indicating that the satisfaction of mastering a new skill also further improved their mood.

“It was actually quite shocking to me that they were so much better,” Lambert said.