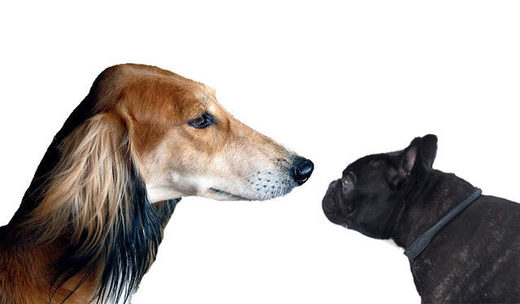 The old saying goes that you can’t judge a book by its cover, suggesting that first impressions based upon the look of something don’t give you much information. However a recent study suggests that for dogs, their appearance (in terms of their size and their head shape), may well give you a lot of information about the personality and behavioral characteristics of the dog.

Although the initial domestication of dogs may have occurred 14,000 years or more in the past, humans have continued to transform dogs to fulfill many different functions associated with guarding, herding, hunting, or simply companionship. Our selective breeding of dogs has modified their size and their shape dramatically so that the more than 400 recorded breeds of dogs are easily recognizable based on their physical characteristics. It also appears that there is some correlation between a dog’s head shape and the functions that they perform for humans; for example the sighthounds (who pursue game over open ground) tend to have long narrow heads, while many of the guarding breeds tend to have more square shaped heads.

A team of researchers headed by Holly Stone of the Faculty of Veterinary Science at the University of Sydney in Australia decided to see if the body size and head shape of dogs predicted aspects of canine behavior. Their report appears in the journal PLoS ONE. This is a massive study, involving 67,368 dogs from 45 different breeds. Data collection was done over a period of eight years at 235 testing areas in Sweden. The behavior testing was done using the Dog Mentality Assessment Test, which is a standardized behavioral test involving 10 different subtests designed to measure a dog’s aggressiveness, defensiveness, playfulness and sociability, fearfulness, chase instinct, curiosity and so forth. Some of the subtests involve observing the dog’s reactions to individuals who appear to be strange or threatening, other measures test their reactions to sudden events like strange sounds, gunshots, or dummies that pop up from nowhere.

The physical variables that the researchers were interested in were primarily the height and weight of the dog, and the shape of the dog’s head. While the first two variables are obvious the shape of the dog’s head requires a bit of explanation. There is a lot of variability in head shape among the various dog breeds. Put simply, head shape ranges from the long-headed dogs, technically called “dolichocephalic” (such as the Afghan Hound or the Greyhound) to the broader wide-skulled dogs technically called “brachycephalic” (such as the Pug or French Bulldog). In between are the “mesocephalic” (sometimes called “mesaticephalic”) which would include the Golden Retriever or the Beagle. You can see some examples below. 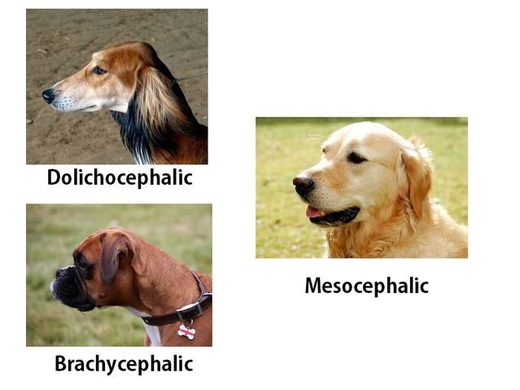 There is a technical way to determine the dog’s head shape and this involves computing what is called the “Cephalic Index”. To calculate the cephalic index you have to measure the skull at its widest point, then multiply that by 100 and divide the result by the maximum length of the skull. You can see how such measures are taken in the figure below. Smaller values are associated with dolichocephalic dogs (long-headed) and larger values indicate brachycephalic dogs (short-headed). 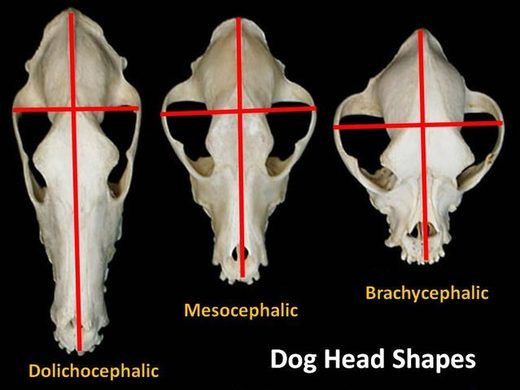 The physical and the behavioral data were then analyzed using a complex statistical procedure (backward elimination and weighted step-wise regression), and the data were presented in a format that makes teasing out the result laborious, therefore I will simplify the results for this discussion.

The dog’s height predicted a number of aspects of the dog’s behavioral tendencies. It may be a surprise to many people to find that shorter dogs were found to be generally more aggressive than taller dogs. In addition the taller dogs tended to show more affection, cooperation, and playfulness with humans.

Head shape also predicted some differences in temperament. The brachycephalic dogs seem to be more engaged with their owners with a higher interest in human-directed play. On the other hand these short-faced dogs were more defensive when faced with a difficult to interpret situation (such as seeing a person dressed like a ghost). The dolichocephalic dogs seem to be less likely to engage in object play, especially with unfamiliar humans. However these long-faced dogs were not as easily startled and recovered more quickly when an unexpected event occurred.

These are just the major findings. However the overall conclusion is that the height, weight, and head shape of dogs can predict certain important behavioral and temperament variables including certain aspects of aggression, fearfulness, sociability and affection. In general it supports Sigmund Freud‘s contention that “Physiology is destiny,” at least when it comes to the size and shape of dogs.

For those of you who are curious (perhaps to check the head shape of your own dog) I have included a brief list of dog breeds classified by their head shape below:

Stanley Coren is the author of many books including: Gods, Ghosts and Black Dogs; The Wisdom of Dogs; Do Dogs Dream? Born to Bark; The Modern Dog; Why Do Dogs Have Wet Noses? The Pawprints of History; How Dogs Think; How To Speak Dog; Why We Love the Dogs We Do; What Do Dogs Know? The Intelligence of Dogs; Why Does My Dog Act That Way? Understanding Dogs for Dummies; Sleep Thieves; The Left-hander Syndrome