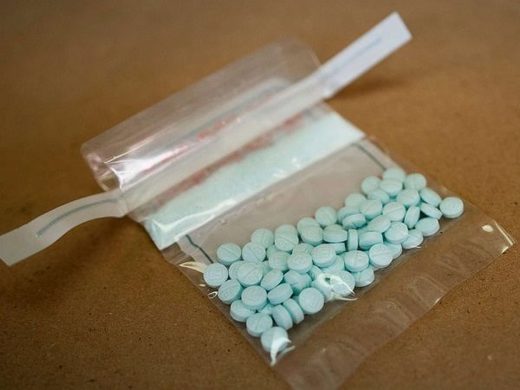 © Don Emmert/AFP via Getty Images
Tablets believed to be laced with fentanyl are displayed at the Drug Enforcement Administration Northeast Regional Laboratory on Oct. 8, 2019 in New York.

The Drug Enforcement Administration issued a warning on Monday about counterfeit prescription pills, saying the pills are “killing Americans.”

“Mexican drug cartels are manufacturing mass quantities of counterfeit prescription pills containing fentanyl,” according to a press release from the DEA.

Twenty-seven percent of counterfeit pills seized by the DEA contain “potentially lethal doses of fentanyl,” according to the government agency.

Head said there is typically 30 milligrams of oxycodone in a pill. But the fake pills have no oxycodone in them, only high amounts of fentanyl.

“Fentanyl is about 50 times more potent than heroin,” said Head. “Two milligrams of fentanyl is what’s considered a lethal dose for about 95% of the population.

Black market 30 mg oxycodone pills can sell on the street for up to $30 per pill, according to the DEA.

The CDC said the the pills are often mixed with heroin or cocaine without the user’s awareness.