Neuroscientist Glenn Fox has dedicated his life to studying gratitude — how it improves our resilience, lowers stress, and boosts overall health. He’s an expert on the ability of gratitude to help us through tough times.

But on Thanksgiving in 2013, Fox was feeling anything but grateful. That’s because, just a few days before, he’d lost his mother to ovarian cancer.

Fox was just months away from completing his Ph.D. on the neural bases of gratitude. He knew from his research how therapeutic gratitude can be — and how it could help him in his long journey recovering from grief. What he didn’t know was how to make that happen on a practical level.

“I thought, you know, I really need to put this into action,” he said. “I don’t want to be flattened by this forever. I don’t want this to define me.”

Fox’s personal journey into the power of gratitude began after his mother’s diagnosis with stage 4 ovarian cancer. She was interested in his work, but also interested in how it could help her.

“There are studies of gratitude in cancer patients that I would send her,” Fox said. “And she would look at them, and she would say, ‘Well, how can I practice this? What can I do?'” 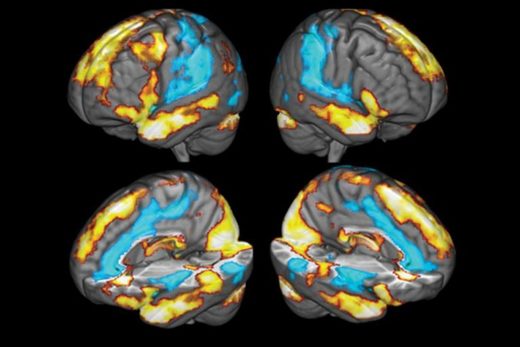 © Glenn Fox
An image from neuroscientist Glenn Fox’s study on the neural correlates of gratitude.

One of the answers was to keep a gratitude journal, which Fox said she did religiously in the final years of her life.

“I mean, she was dying, and yet she would still write down things that she was grateful for,” he said. “It might be simple things like being able to eat a piece of chocolate, right? Or it might be profound like a blood transfusion.”

The practice had a profound effect on his mother’s ability to stay in the moment, and appreciate the time she had left, he said.

That fit with what Fox and other researchers have learned over the years about the power of gratitude.

“Grateful people tend to recover faster from trauma and injury,” Fox said. “They tend to have better and closer personal relationships and may even just have improved health overall.”

Fox knew all this — and he’d seen first-hand how a gratitude practice had affected his mother. Despite that, he found himself nagged by skepticism that gratitude could really help him out of this deep pit of grief.

“The day after she died, I woke up and started thinking, ‘Okay, gratitude guy … Like, what do you got?'”

Fox may have believed in gratitude, but he’d never really given structured practice a fair shake. So, in the months after his mother’s death, he resolved to begin keeping a gratitude journal.

“I don’t think I really knew the extent to which gratitude could work when you actually wrote things down,” he said.

The study of gratitude is a relatively recent phenomenon, according to Emiliana Simon-Thomas, who heads the Greater Good Science Center at the University of California, Berkeley.

“Gratitude, in many ways, was one of the first ideas to launch the field of positive psychology,” Simon-Thomas said. “So instead of only trying to figure out how to correct what’s gone wrong, can we figure out how to optimize what is just fine? … Can we build strength and tenacity and resilience so that individuals can be their best selves, rather than simply ensure that should they get sick, we know how to ameliorate the symptoms of that illness?”

Positive psychology has helped establish a classification of positive emotions, including how and why they evolved.

“Gratitude fits into a category of what we would call pro-social emotions, and these are emotions that orient us towards the welfare of others,” Simon-Thomas said. “It creates this kind of bond, this enduring sense of connection, with another person or another organism who we’re poised to cooperate with.”

That cooperation, Simon-Thomas said, has been key to our survival as a species.

“That’s what it’s for,” she said. “And humans have it from a very early time as a way to kind of create the social relationships that are so important for our evolutionary success.

Simon-Thomas said gratitude is also tied to other emotions that connect humans.

“I do think that there’s an argument to be made in support of the idea that gratitude scaffolds other emotional experiences,” she said. For example, there’s research supporting relationships between gratitude and love, as well as gratitude and interpersonal trust.

In addition to supporting our relationships, other research has found that gratitude can have myriad positive effects on our health.

It’s been shown to lower stress, reduce pain, and even improve our immune systems, blood pressure, and heart function.

Tracing back the benefits of gratitude

One of the big questions Glenn Fox and other researchers have been trying to answer is: What is it about gratitude that leads to this whole host of positive benefits?

To find out, Fox did an experiment using brain-imaging scans to map which circuits in the brain become active when we feel grateful.

“We saw that the participants’ ratings of gratitude correlated with activity and a set of brain regions associated with interpersonal bonding and with relief from stress,” Fox said.

Part of this has to do with the rewarding feeling of social interaction. The regions associated with gratitude, Fox said, are part of the larger networks that light up when we socialize and experience pleasure. They also happen to be connected with stress relief.

“You know, that feeling of relief is itself quite rewarding,” Fox said. “We call that reward from relief.”

The sensation not only feels good, it’s good for us.

“We know stress is extremely toxic,” Fox said. “And so anything we can do to relieve stress, will probably lead to health benefits.”

Stress relief has also been shown to reduce pain — which is a big part of what Fox was looking for in the months after his mother’s death.

“I had some very banal ones, like, ‘Good day ahead, chance to be productive,'” he said, reading from his journal. “Oh, I made a cutting board, and it said, ‘Cutting board is holding up very well.'”

There were also entries about easy commutes, and a few about his foot, which Fox had broken with too much jogging.

Those entries didn’t change the way he felt — at least not at first.

“It didn’t make me feel like, oh, everything is great, because gratitude isn’t a synonym for happiness,” he said. “So what gratitude got me in that moment wasn’t that I didn’t feel any pain — far from it. In fact, it may have even made that sense of pain more acute. But it made me aware of it in a way that I felt I could manage it.”

How gratitude functions in the brain

So if gratitude wasn’t delivering a quick hit of relief, how exactly was it helping? 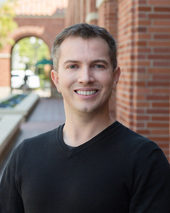 Researcher Glenn Fox studied gratitude for years before developing his own practice.

“We wanted to understand: Are there changes that happen over time in the brain as people express gratitude?” Josh Brown, the study’s co-author, said. “And if so, what are those changes?”

To answer those questions, the study recruited locals who were seeking help for depression and other mental health issues. All of them received counseling, but there was also an intervention. A third of the subjects wrote letters of gratitude, a third wrote about their deepest thoughts and feelings, and a third wrote nothing at all.

At first, Brown said, they didn’t register a change among the three groups. But that changed when they went back to scan the subjects’ brains three months later.

That jives with Fox’s understanding of how gratitude conditions the brain.

“I think that gratitude can be much more like a muscle, like a trained response or a skill that we can develop over time as we’ve learned to recognize abundance and gifts and things that we didn’t previously notice as being important,” he said. “And that itself is its own skill that can be practiced and manifested over time.”

Fox said increased sensitivity doesn’t necessarily mean that you become constantly grateful, but rather it means you become more attuned to the full range of gratitude, from holding the door for someone to donating a kidney.

“It’s that we actually increase our resolution of gratitude,” he said. “Meaning, we see it in high fidelity. It’s like HD gratitude.”

It’s something Fox sees in his own gratitude journaling when he compares his entries from five years ago to his entries now.

“The more recent ones are much more specific,” he said. “You know, so, ‘A brisk spring morning walk and a new book,’ ‘sunshine through the windows during meditation,’ ‘warm sun at the pond at the ranch,’ ‘my new niece giggling during our trip to North Carolina.’ So they’re a lot more specific. The earlier ones are much more like, ‘Woke up early, foot feels better.’ And so they’re not necessarily getting even super long or elaborate, but they’re much more specific, and I think that’s really where you get the HD gratitude.”

None of this has been a magic bullet, Fox emphasized. It didn’t save him from the grief of losing his mother, or from his daily frustrations. But slowly, over time, it’s made a difference.

“You know, it’s like water cutting rock through a canyon,” he said. “It’s not done all at once, and it’s just steady practice is where you start to get things.”

Fox said it’s a mistake to think of gratitude as a cure for pain — something that can be applied when things get bad to lessen the blow. Instead, he said, it’s a regular practice that shores up our reserves, and changes how we perceive the bad times.