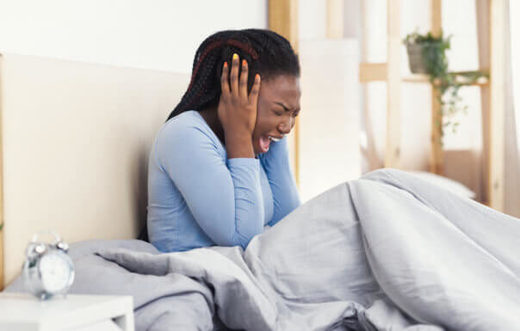 Nightmares are no fun, but a new international study finds all that nighttime fear may actually be serving a greater purpose. Researchers from both Switzerland and the United States identified the areas of the brain that were activated while a group of participants experienced fear in their dreams. Interestingly, they discovered that after the participants woke up, those same emotion-regulating brain areas responded to scary situations much more efficiently.

All in all, the research team believe their findings lend credence to the theory that dreams actually help our brains prepare to tackle real world stressful situations. Consequently, this research opens the door for a multitude of new dream-based therapeutic methods for treating anxiety.

Dreams have become a popular topic of research in neuroscience circles, more specifically the areas of the brain that activate as we doze off. Just recently it was discovered that certain brain areas are responsible for the formation of dreams. Furthermore, different brain regions are only activated depending on the type of dream one is experiencing. For example, the thoughts, emotions, and perceptions that a singular dream may incite.

“We were particularly interested in fear: what areas of our brain are activated when we’re having bad dreams?” states researcher Lampros Perogamvros, of both the University of Geneva and University Hospitals of Geneva, in a release.

For the research, 18 participants were gathered for a sleep experiment. After being fitted with EEG electrodes, in order to measure brain activity, the participants were woken from their slumber multiple times over the course of a night. Each time they were greeted by a series of questions like: “Did you dream? And, if so, did you feel scared?”

“By analyzing the brain activity based on participants’ responses, we identified two brain regions implicated in the induction of fear experienced during the dream: the insula and the cingulate cortex”, Perogamvros explains.

The insula is also involved in emotion evaluation and regulation while we’re awake, and automatically activates whenever we start to feel afraid. The cingulate cortex, on the other hand, helps control reactions during threatening situations.

“For the first time, we’ve identified the neural correlates of fear when we dream and have observed that similar regions are activated when experiencing fear in both sleep and wakeful states,” Perogamvros adds.

Next, the research team wanted to look into the possible relationship between fear felt while dreaming and emotions felt while awake. So, they handed out a dream diary to 89 participants to use for a full week. Participants were asked to write down any dreams and emotions they felt while sleeping first thing in the morning all week. Finally, after seven days, each participant was placed in an MRI machine and shown a series of images.

“We showed each participant emotionally-negative images, such as assaults or distressful situations, as well as neutral images, to see which areas of the brain were more active for fear, and whether the activated area changed depending on the emotions experienced in the dreams over the previous week,” explains Virginie Sterpenich, a researcher in the Department of Basic Neurosciences at the University of Geneva.

In this phase of the research, the study’s authors were especially interested in observing the behavior of brain areas usually associated with emotion, such as the insula, amygdala, medial prefrontal cortex and cingulate cortex.

“We found that the longer a someone had felt fear in their dreams, the less the insula, cingulate and amygdala were activated when the same person looked at the negative pictures,” Sterpenich continues. “In addition, the activity in the medial prefrontal cortex, which is known to inhibit the amygdala in the event of fear, increased in proportion to the number of frightening dreams!”

It’s worth noting, however, that the research team believe that once a nightmare crosses the line into causing full blown terror, it loses most of its neurological benefits due to the high likelihood of sleep disruption and stress upon waking.

“We believe that if a certain threshold of fear is exceeded in a dream, it loses its beneficial role as an emotional regulator,” Perogamvros concludes.

The study is published in the scientific journal Human Brain Mapping.