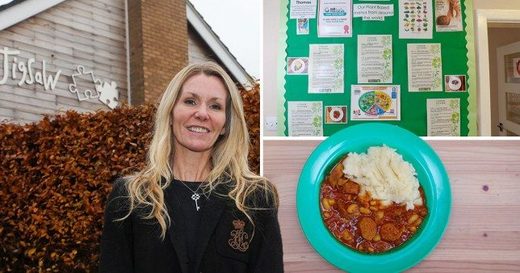 © SWNS
Jigsaw Day Nurseries, in Chester, will be entirely vegan from January.

A nursery has sparked outrage by becoming one of the first in Britain to introduce a 100% vegan menu for children.

From January, Jigsaw Day Nurseries, in Chester, will no longer be serving meat, fish, eggs or dairy products to the 260 children they care for. Instead the children, all aged between 0 and four, will eat the likes of lentil-based ‘Shepherdless Pie’, coconut rice pudding desserts, plant-based yogurts and cereal served with soy or oat milk.

Staff say the switch has been made with ‘the children and the planet’s future in mind’, but some parents now claim their meat-eating kids are being discriminated against.

One mum, who has a three-year-old daughter at Jigsaw Curzon House Nursery, described the vegan menu as ‘bonkers’.

She continued: ‘Just to enforce it on us without any say isn’t right – they shouldn’t be making these decisions on my behalf.

‘If my daughter wants to be a vegan when she’s older then that’s fine but I’ll have that conversation with her myself.

‘There’s obviously no cheese, which my daughter loves, and no meat or the goodness from fish. It’s such a huge, drastic change and I’m not happy about it.’

Another parent, who also did not want to be named, added: ‘To impose a lifestyle choice on these children before they can make their own mind up is plain wrong.

‘If anything it discriminates against those kids who enjoy a diet of meat and fish. To ban them from eating meat is outrageous. Its simply not their decision to make.

‘I like to think I cook healthy and nutritious meals for my children which include meat and vegetables. My son has a big appetite as well, I think he’ll come home starving.’

However some parents have welcomed the move and are now suggesting other nurseries follow suit to ‘save the planet’ and ‘educate the children’. One mum wrote on Facebook: ‘Vegan or not, this is an incredibly healthy sounding menu and I am thrilled our son will be eating this kind of food.

‘If anything, it takes the pressure off having to feed him uber healthy food at home because I know he’ll have had a wholesome and nutritious meal at nursery.’

The nurseries are Chester’s biggest childcare provider and are rated ‘Good’ by Ofsted. Childcare costs between £235 and £240 per week, or £48 to £49 a day, including meals and snacks.

Nursery founder Claire Taylor said: ‘We appreciate that this is a decision that comes with a business risk associated, however we feel passionately that a sustainable path is the one we wish to follow for the benefit of our children’s future.

‘The food that the children eat within our nurseries not only has an impact on everyone in the setting but also on the health of our planet.’

She added that the company had worked with a fully-qualified nutritionist to ensure the menu ‘meets all of the relevant guidelines for early years nutrition and diet for children under the age of five’.

All the new dishes have been adapted from the existing menu, meaning children will be ‘fully familiar with the tastes, textures and flavours’.

Mrs Taylor added that the children and 70 staff at the nurseries, eat 1,300 lunches and 2,600 light snacks every week, meaning they have a ‘significant food footprint to consider’.

She added: ‘We fully acknowledge and appreciate the response we’ve had from a group of our parents.

‘This is a change which impacts their child and they have every right to voice their concerns and seek reassurances.

‘It is important to highlight that we have also had a significant amount of support and positive feedback from others across the two settings who are fully supportive of the imminent changes.’