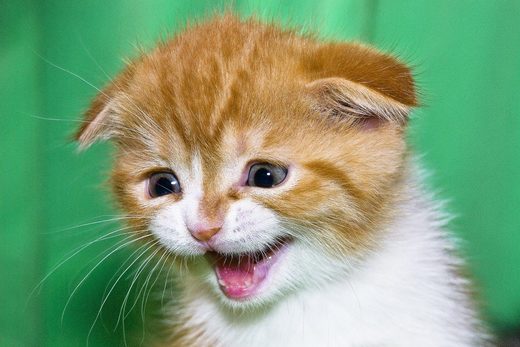 Like humans, cats communicate their emotions through facial expressions.

Whenever the cat sitter texts Georgia Mason and her husband photos of Sylvie and Luke, their two brown tabbies, “we usually agree if our cats are looking cheerful or grumpy or anxious,” she says.

Now, a new study led by Mason, a behavioral biologist at the University of Guelph in Canada, shows that people who can consistently decode feline expressions belong to a special clan: That of the cat whisperer.

For the research, Mason and colleagues created an online survey and invited internet users (aka, the cat’s biggest fan club) to take part. The 6,329 participants from 85 countries watched between two to 20 short videos of cat expressions, and then responded if they thought the felines were distressed or happy. These random users got an average of 11.85 out of 20 ratings correct — better than chance, but not by much.

But about 13 percent of the survey takers were unusually skilled at reading cats’ emotions, scoring at least 15 out of 20 correct — the so-called cat whisperers. Those who self-reported being young, female, and having professional veterinary experience were mostly likely to score well. Surprisingly to Mason, cat ownership had no impact on the ability to interpret cat emotion.

In humans, facial expressions are a major — if underappreciated — form of human communication, says Mason, whose study appeared in the November issue of the journal Animal Welfare. And recent research shows that a variety of animals, from rats to dogs to horses, also “make facial expressions that clearly communicate how they’re feeling,” she says.

A study published earlier this year found that cats were no exception, while also hinting that humans could comprehend subtle forms of cat communication, especially facial expressions.

To find out, Mason and her colleagues at the university’s Campbell Centre for the Study of Animal Welfare turned to the world’s largest repository for videos of cat behavior: YouTube.

Cats are often perceived as inscrutable, but they likely have subtle forms of communication that people have previously ignored.

The scientists trawled through countless hours of feline footage with a very specific set of criteria: Clips of under four seconds that clearly showed a cat’s face — its eyes, muzzle, and mouth — in situations in which the pet was clearly relaxed or upset. The video’s narration or description helped the team discern the context of the video, and, not surprisingly, many of the upset cats were visiting the vet. (The researchers avoided videos in which cats displayed pinned-back ears or exposed fangs, which are already well-known signs of feline fear.)

They eventually settled on 40 short videos, 20 showing happy kitties and 20 showing distressed ones. Each group was further subdivided into active and resting cats so that the feline’s movement wouldn’t bias the results. The team also snuck in clips of their own cats before finalizing the survey and blasting it out on social media.

Beyond the intriguing cat whisperer findings, the study also revealed that people were better at seeing positive emotion in cats than negative ones — for instance, more than 85 percent of respondents correctly guessed that Mason’s cat, Luke, was content.

Mikel Delgado, a cat-behavior expert at the University of California, Davis, says the research “shows that people can identify a cat’s emotional state from very limited information.”

She adds that this study is a “great start” to cracking cat communication, but cautions against identifying a cat’s emotional state based on one piece of information. “There’s still a lot for us to understand about cat body language,” says Delgado, who wasn’t involved in the research. (Take our National Geographic quiz on animal feelings.)

For instance, body language such as tail and ear position are also relevant signals to how a cat is feeling.

In future studies, Mason hopes to figure out how exactly cat whisperers are so good at what they do. For instance, pinpointing specific cues that people are reading in the pets’ facial expressions could help veterinary professionals and cat owners to better “speak cat.”

And lest us humans think our furry friends only put on a happy face so we’ll open another can of tuna, Mason adds that cats probably use these expressions while interacting with one another.

The bottom line? “Cats are expressive,” she says, “even though they’re usually regarded as inscrutable.”