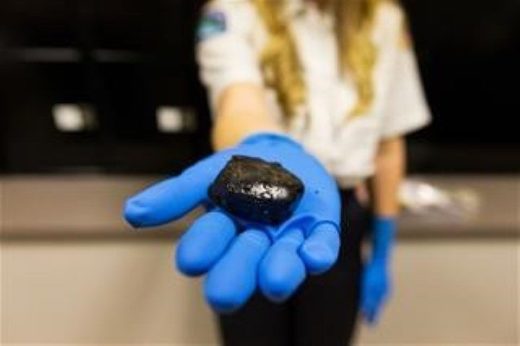 © Shawn Gust/Coeur D’Alene Press via AP
In this Jan. 27, 2016, photo, black tar heroin is seen among many other heroin-related items in the evidence room of the police department in Post Falls, Idaho.

Seven people in San Diego County have been killed by a flesh-eating bacteria since the beginning of October, and health officials say the outbreak is linked to the use of black tar heroin.

Black tar heroin is “sticky like roofing tar or hard like coal,” with a dark color resulting “from crude processing methods that leave behind impurities,” per the National Institute on Drug Abuse, and the county’s chief public health officer says in a statement that those who inject it are at more risk of myonecrosis, caused by flesh-eating bacteria, as well as wound botulism and death by overdose.

Two others were hospitalized with myonecrosis between Oct. 2 and Nov. 24, the San Diego Union-Tribune reports; all nine patients were between 19 and 57 years old, and five of those who died were male.

Health officials issued an advisory asking the local health-care community to be on the alert for more cases of the condition, a soft-tissue infection that destroys muscle and can ultimately lead to shock, amputations, or death, as well as for more cases of wound botulism, a rare illness that attacks the nervous system and can also lead to death.

There has been one case of wound botulism linked to black tar heroin in the county, but there have been 13 probable or confirmed cases elsewhere in Southern California since September, most of them among users of black tar heroin.

Officials don’t yet know the source of the heroin, but NBC News notes that historically, black tar heroin found west of the Mississippi River is more likely to have been produced in Mexico. Making things tricky: Wound botulism symptoms can take weeks to set in and can be mistaken for symptoms of an OD.