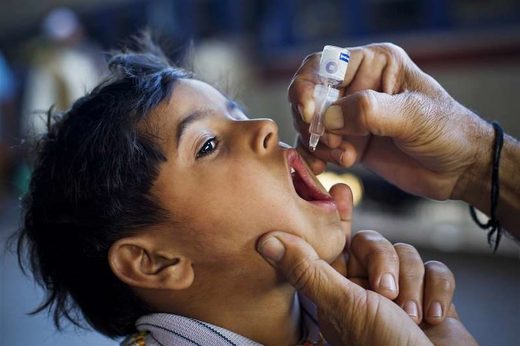 To stem a growing polio crisis, health officials are accelerating the development of a new oral vaccine with plans for emergency approval and deployment in regions with active polio transmission as early as June 2020. The new vaccine, called nOPV2, might conclusively end the outbreaks, caused by the live virus in the vaccine reverting to a virulent form. But expedited approval means skipping the real-world testing of large clinical trials.

Instead, key questions about the vaccine’s effectiveness will be answered in the field.

“The nOPV strains have been tested in a small number of volunteers and we do not see reversion to neurovirulence,” says Vincent Racaniello, a virologist at Columbia University, “but when they are used for mass immunization of millions of individuals, rare events can become evident.”

Oral polio vaccine strains, originally developed by Albert Sabin in the 1950s, can in rare instances revert to virulence, spread, and paralyze children just like polio itself, a phenomenon first recognized in 2000. Because the Sabin vaccine had successfully eradicated wild type 2 poliovirus in 2015, health officials across the world quit administering it the following year. However, herd immunity had not been achieved before the cessation of the type 2 vaccine, which gave an opportunity for un-immunized people to later become infected by the virus that had begun reverting to virulence in people who had gotten the vaccine. With successive transmission through the unvaccinated, the vaccine strain can regain the virulence of wild polio.

Nowadays, cases of polio caused by vaccine-derived strains outnumber those caused by the wild virus-and they continue to spread unchecked, most recently from the Phillipines to Malaysia. Vaccine-derived polio threatens as many as 210 million children globally, according to the World Health Organization. Using the reversion-prone Sabin type 2 vaccine to fight outbreaks caused more new outbreaks than it stopped, a virologist at the Centers for Disease Control and Prevention (CDC) told Science earlier this year.

Locking the gates to polio reversion

nOPV2, the new type 2 oral polio vaccine, has been genetically engineered to avoid the pitfalls of Sabin’s vaccine. The project is funded by the Gates Foundation and coordinated by PATH, a nonprofit developer of public health innovations, with scientific work taking place at the National Institute for Biological Standards and Control (NIBSC) in the UK, the University of California, San Francisco, the CDC, and the Food and Drug Administration.

Poliovirus “evolves readily to any situation it finds,” says Andrew Macadam, a principal scientist at NIBSC and a designer of nOPV2. As RNA viruses, polio and polio vaccine strains evolve using mutation and recombination. Polio “has a polymerase that is not very accurate,” says Macadam, so mutations occur frequently during replication. More importantly for rapid adaptation, recombination allows the virus to incorporate RNA strands from other C type enteroviruses in human hosts that enable gains in virulence. These partners include all the Sabin strains and Coxsackievirus, for example.

nOPV2 obstructs some key genetic routes to pathogenicity, believed to be controlled by “gatekeeper” mutations. In particular, a single point mutation at nucleotide 481 increases neurovirulence and actually occurs in most people soon after immunization. The pivotal change at 481 makes a return to virulence possible, according to Macadam. “The gatekeeper idea,” he explains, “is that it needs to revert at 481 before it can do anything else and then you can incorporate these other mutations” that cause the vaccine to become pathogenic.

So nOPV2 developers modified 18 nucleotides near 481 in the poliovirus genome so that the well-known single substitution no longer opens the gate to virulence. This safeguard in turn is protected from wholesale replacement via recombination by relocating a gene necessary for replication to another part of the genome so that if the modifications near 481 are lost through recombination, the gene needed for replication will also be lost. As a result, reversion “requires two recombination events instead of one,” according to Macadam, one being the acquisition of a second copy of the replication gene and the other being the loss of the 481-related modifications. “Therefore, it’s less likely,” says Macadam.

In addition, Macadam’s team outfitted nOPV2 with a higher-fidelity polymerase that introduces fewer errors during replication while another gene received alterations to decrease the virus’ propensity for recombination.

The risk of polio recombination

Macadam nevertheless says it’s “debatable” how much nOPV2’s design will reduce recombination. Specifically, he is concerned about the recombination risks posed by the Sabin 1 and 3 strains. Before administration of the type 2 vaccine strain was halted in 2016, all three strains were co-administered in a single drop. Macadam cautions against co-administration of nOPV2 with Sabin 1 and 3. “I just wouldn’t see the logic in doing that,” he says. Recombination with the Sabin strains could set nOPV2 on the path to virulence. Co-administration could “jeopardize the safety of what you’re trying to do,” says Macadam.

However, delivering vaccines in separate campaigns creates a significant operational constraint. “This conundrum is real, and is already being seen,” says WHO spokesperson, Oliver Rosenbauer. In parts of Nigeria and the Lake Chad region, some vaccination campaigns are conducted with Sabin 1 and 3, others with solely with Sabin 2. “So that needs to be logistically managed appropriately.”

Also, the continually broadening scope of type 2 vaccine-derived outbreaks might necessitate co-administration at continent scale. Rather than tightly circumscribed use of nOPV2 in response to isolated outbreaks, says Temitope Faleye, there needs to “one, very well-coordinated immunization campaign that cuts across the whole of sub-Saharan Africa.” Faleye is a researcher at the Nigerian Institute of Medical Research. “You immunize as many children as possible to ensure that you don’t have pockets of people” who can start vaccine viruses back on the path to renewed virulence, which happened before and led to the current outbreaks.

Even if nOPV2 is kept away from Sabin 1 and 3, they are not the only available recombination partners. “The real concern out here is these species C [enteroviruses] that are circulating,” according to Faleye. “By default,” he says, “most of the children have enteroviruses in them” in Nigeria and across sub-Saharan Africa, where most of the world’s outbreaks of vaccine-derived polio are occurring. They are known to fuel reversion of the Sabin vaccine strains. Faleye’s research has found instances of vaccine-derived poliovirus arising from two independent recombination events with enteroviruses. “[I]t is a phenomenon that has been documented.”

He describes nOPV2 as “beautiful, plausible, and theoretically based on solid science.” But, he says, “anybody in the field knows that with the current design, you don’t have control of viral recombination.”

The real of test of nOPV2

Racaniello, who wasn’t involved in the development of the vaccine, agrees that nOPV2 is “probably going to be better,” but with a caveat. “There is nothing like the selection force of millions of human guts.” Increased fitness and virulence overlap, so adaptations for surviving the brutish competition in the gut also increase virulence in the spinal cord, where polio causes damage. And because of the compressed approval and deployment timeline, nOPV2 may be used in millions of kids beginning in mid-2020, before a Phase 2 trial in Bangladesh, which will pit the vaccine against real-world conditions such as co-infections with other enteroviruses, could finish.

A completed Phase 2 trial in Panama sheds little light on recombination with enteroviruses. “Species C enterovirus prevalence was not an endpoint” in the Panama trial, says PATH’s John Konz, who leads the nOPV2 project. “We might get some sense of levels from next generation sequencing of virus in stool samples, but those results are not yet available.” In addition, according to Macadam, “the actual analysis pipeline won’t be as extensive as it might be, if we had unlimited resources.”

Racaniello commends nOPV2, which “was made using all the fundamental results that we and others have developed over the years.” But he questions how airtight nOPV2’s architecture is against reversion. The gatekeepers are essential for efficient replication, according to Racaniello, “but there are likely many others” beyond the few that have been identified. nOPV2 defends against just one of those.

Another question looms over nOPV2’s deployment: will the vaccine actually protect against polio? Clinical trials so far have measured the type 2-specific serum neutralizing antibodies elicited by nOPV2. Protection is believed to result when titres reach certain thresholds. “Can we measure antibody responses in animal models and in limited clinical tests and say, ‘This should be OK in people?'” asks Racaniello. “I think that’s what WHO, CDC, and [the] Gates [Foundation], and everyone else is hoping,” he says, naming some of the key partners in the Global Polio Eradication Initiative, which decides and implements the vaccine strategy for polio eradication. “That should be enough . . . but there’s nothing like putting it in people to really find out.”

At PATH, “we don’t see any unique risks for nOPV2 over the current vaccine,” says Konz. The relative paucity of clinical data is offset by the knowledge from decades of using the Sabin 2 strain from which nOPV2 is derived. “In the end,” he says, “it’s a relative benefit-risk decision that the WHO, policymakers, and national authorities will have to make.”

While the polio eradication effort is betting nOPV2 will be a silver bullet, “nothing is off the table,” according to WHO’s Rosenbauer, “and everything is being explored,” including even a possible return to the old vaccine with the three original Sabin strains.

Robert Fortner is a freelance journalist based in Portland, OR. Email him at robertwfortner@gmail.com or follow him on Twitter @robertfortner1.