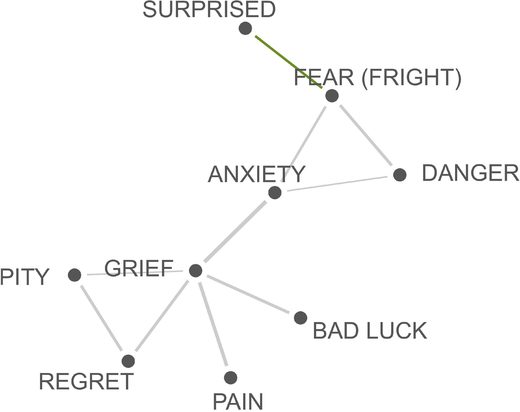 Words for emotions like “anger” and “fear” vary in meaning across language families. Researchers have now compared colexifications of emotion words — cases where one word signifies multiple semantically related concepts. By analyzing such words in 2,474 spoken languages, they found variation in emotion conceptualization and evidence of a universal structure in colexification networks.

Among the rich vocabularies many languages have for communicating emotions, many words appear to name similar emotional states. The English word “love,” for example, is often translated into Turkish as “sevgi” and into Hungarian as “szerelem.” But whether the concept of “love” has the same meaning for speakers of all three languages remains unclear. In the current study published in Science, researchers from the University of North Carolina at Chapel Hill, the Max Planck Institute for the Science of Human History, and Australian National University have used a new method of comparative linguistics to examine the meaning of emotion concepts around the globe.

With the help of a database of 2,474 languages, the researchers constructed networks of colexified emotion concepts and compared them across languages and language families. These emotion colexification networks varied significantly, suggesting that emotion words may vary in meaning across languages, even if they are often equated in translation dictionaries. In Austronesian languages, for example, “surprise” is closely associated with “fear,” whereas Tai-Kadai languages associate “surprise” with the concepts “hope” and “want.”

“The emotion ‘surprise’ is particularly helpful for understanding this study,” says lead author Joshua Conrad Jackson. “Given that one language family has negative associations with the word and another has positive associations, you can imagine how speakers of these different languages might respond to people jumping from behind furniture or out of a dark room and shouting ‘surprise!'”

© J.-M. List
Global distribution of languages in which “surprise” and “fear” are expressed by the same word

Despite the wide variation of emotion semantics, researchers found evidence of a universal structure constraining the emotion concepts that form colexification networks. Valence — the pleasantness or unpleasantness of an emotion — and activation — the physiological arousal associated with experiencing an emotion — are the strongest predictors of network membership. “The ability of valence and activation to predict structure in emotion semantics across language families suggests that these are common psycho-physiological dimensions shared by all humans,” says senior author Kristen Lindquist.

While scientists, philosophers, and artists will continue to debate the meaning of emotions, this study provides evidence for the role of both cultural and biological evolution in the formation of emotion semantics, and creates a new method of investigation and new metrics for measuring semantic distances. “We hope future research will make use of this methodology and examine the specific processes that create cultural and geographic variation in how people understand and experience emotion,” says Jackson. 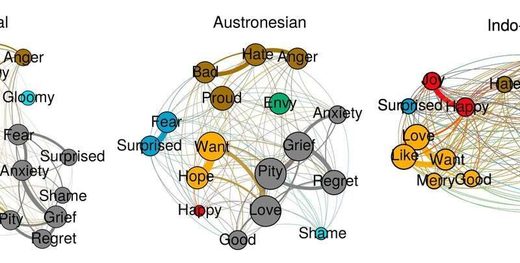 A global database of concept semantics

At the core of the analyses in this study was CLICS — a database of colexifications involving 2474 languages from around the world. “Four years ago, the CLICS database only had colexification data on about 300 languages,” says Johann-Mattis List, an author on the paper who led the construction of CLICS. “But our new methods for standardization have allowed us to increase the amount of data rapidly over the past years.”