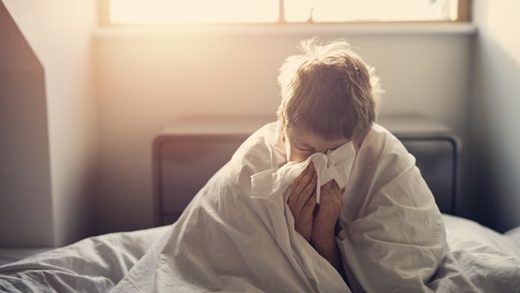 If ever there was convincing proof that vaccination does not equate to bona fide immunity, it is at St. Theresa Catcholic School in Texas…

Reported by FoxNews.com on Dec. 19th, the school experienced an outbreak of whooping cough, causing them to close their doors and start their winter break early.

On Dec. 4th, St. Theresa Catcholic School in Memorial Park, reported its first case to the Texas Department of State Health Services. Since then, the outbreak has continued to escalate — and not because of the abuse of religious and medical exemptions, and so-called “anti-vaxxer” parents.

According to the FoxNews report, the school vaccine uptake rate was at 100%:

“Officials with the Archdiocese of Galveston-Houston said that 100 percent of students who attend St. Theresa Catholic School are vaccinated against the illness.”

This was confirmed by the following statement to parents sent by the school: 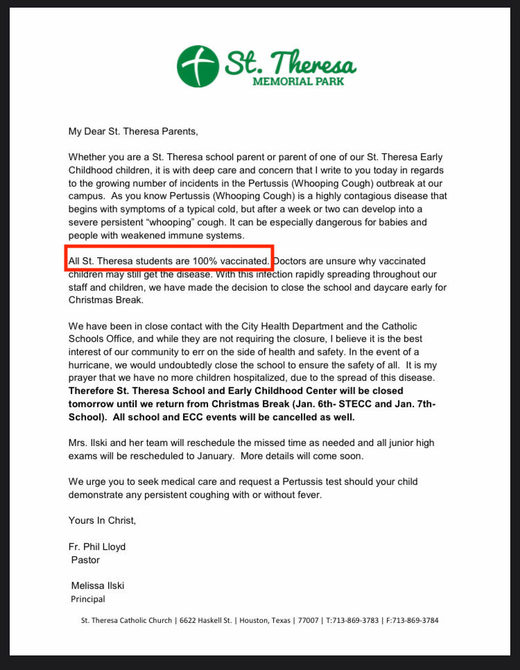 In response to this incident, Children’s Health Defense (CHD) posted an article titled, “Pertussis: Vaccine Failure, Not Failure to Vaccinate,” explaining how despite propaganda to the contrary, it is clearly not conscientious objectors to vaccination driving outbreaks like these (i.e. so-called “anti-vaxxers“), but a failing pertussis vaccine.

In fact, according to CHD’s article the vaccine itself may be driving increased risk for whooping cough:

“Studies show that by five years after completion of the DTaP series, children were up to 15 times more likely to acquire pertussis compared to the first year after the series.”

There are plenty of additional examples in the published literature of vaccination failure in highly vaccinated populations. View 30+ studies on the topic here.

There are also serious questions as to whether vaccines like DTaP are causing more harm than good. GreenMedInfo.com indexes peer-reviewed, published studies that confirm the unintended, adverse effects of vaccinations. You can view close to a thousand study abstracts on the subject on our Vaccination Database. The DTP vaccine has been linked to over 30 adverse health effects which you can viewed here: Vaccination: Diphtheria-Pertussis-Tetanus.

Due to our advocacy on this subject, we have been systematically censored, including recent successful attempts to de-platform us from Mailchimp, Pinterest, and Google (learn more here). Please learn more and support our cause by becoming a member or donating, and celebrating our 10 year anniversary with us.