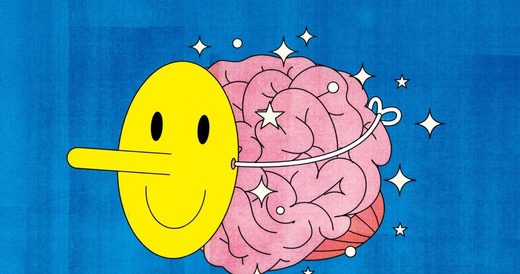 During difficult times in your life, perhaps you’ve been told to “take a deep breath” or “try to smile more.” Anxious about that big presentation at work? Just “stand up tall with confidence, and everything will be fine.”

But to what extent is this kind of advice actually helpful? Can that forced smile trick your brain into believing that you’re happy, and can that upright posture give you a feeling of confidence? Is it possible to change how you think or feel through physically changing your body?

The answer is yes.

But first, take a deep breath

Your body and mind are inextricably linked. So it follows that the way you breathe with your lungs can affect your mental state and the way you process stress with your brain.

Most people are aware that breathing deeply helps you to relax and has a powerful effect on how you feel. When you’re stressed or overwhelmed, a deep breath can help bring your attention toward bodily sensations and away from whatever is making you feel anxious. It’s harder for something to scare you when you’re distracted by something else.

But the benefits of a deep breath stretch further than just distraction. Whether you actively decide to slow down your breathing or simply sigh in response to some frustration at work, it’s common to feel a wave of calm wash over you. Some scientists have even referred to deep breaths as “psychological and physiological resetters.”

A scientific review in 2018 showed that slowing down your breath can influence your mind by boosting alpha activity in the brain, which is a common indicator of relaxation following techniques such as mindfulness.

In a classic psychology experiment from 1988, people found cartoons funnier if they saw them while holding a pen between their teeth, which caused their facial expression to resemble a smile. Researchers explained this phenomenon with a theory called “facial feedback”: Even if people don’t realize that they’re smiling, signals created by the upturned corners of their mouth feed back to their brain and automatically boost their mood. Happiness makes people smile, but smiling itself also makes people feel happier.

The pen-in-mouth study has come under fire in recent years, with other scientists replicating this particular experiment and failing to find the same effects. However, the idea that facial expressions directly influence mood is still holding strong. A 2019 review of all available theories and evidence across more than 100 years of work confirmed that smiling really does make people feel a little happier.

Nicholas Coles, a psychology researcher at the University of Tennessee and lead author of the 2019 review, explains that there’s still some disagreement about the precise mechanism by which smiles translate into feelings of happiness. “One popular theory is that a person’s brain maintains a gauge of how the body is doing and that a smile sends a signal that typically means things are going well,” he says. “If, for example, your ’emotional gauge’ is saying that things are going well, you will report feeling happy.”

Genuinely positive emotions that cause smiling and laughter can cut down on the level of stress hormones (such as cortisol) in the body and can even increase pain tolerance. In other words, smiling and laughing don’t just distract you from stress or sadness, they can also act as drugs that directly stimulate a feeling of global well-being in the brain.

When you decide to smile without the usual trigger of a happy event, your attention becomes focused on the things that make you smile, which are typically the rewarding features of your life that you feel happy and grateful for. The mere act of smiling may activate the thinking patterns that produce the emotional feelings of happiness.

Sticking a pen in your mouth may not be particularly useful, but overtly smiling when you feel down may help to bring your mood back up. It may be a strategy that people can learn to use like they would use a cup of coffee: It’s not the solution to everything in life but it can offer a refreshing kick if used at the right time.

Stand up tall with confidence

Power posing is the idea that broad and authoritative bodily postures — standing like Superwoman, for example — boost confidence and drive people toward success. In a 2010 study, people who held power poses rather than slouched poses for a couple of minutes increased their testosterone (a hormone linked to dominance and aggression), decreased their cortisol, and increased their chances of accepting a risky gamble when offered the opportunity.

The lesson was that acting as though you are confident and powerful may be enough to convince you of that fact. So when you enter into a negotiation with someone, you should stand up tall, look them in the eye, and ultimately win them over.

There is a fierce debate about how reliable and effective power posing really is; the benefits may be limited simply to feeling more powerful rather than altering hormones in the body. However, feelings aren’t exactly a waste of time. Several other areas of research suggest that posture plays an important role in determining whether people feel happy and confident or unhappy and powerless.

When people sit in upright rather than slouched postures for 30 minutes, they perform better when giving a stressful speech in front of people afterward, and they report experiencing more self-esteem and less social threat. When facing a new and difficult challenge, it may help to approach it with a proud and confident posture, because your mindset may just catch up with your appearance.

You find the clearest demonstrations of the link between posture and emotion in the animal kingdom. Dominant chimpanzees display postures that make them look expansive and forceful, while subordinate chimpanzees respond by making themselves as small as possible on the ground. Humans aren’t much different. Although human postural changes are more subtle, broad postures typically reflect upbeat and confident emotions, while slouching reflects sad and anxious emotions.

At the extreme, slumped postures have been linked to depression symptoms, and research suggests that some people’s emotional well-being may be boosted by looking in the mirror while standing up straight with broad shoulders.

Elizabeth Broadbent, professor of health psychology at the University of Auckland, has been a leading researcher on the question of how physical posture impacts psychology. “Changing from slumped posture to upright posture seems to have a large effect, which occurs quite quickly,” she says. “You could use it to get up the courage or motivation to do something you might be worried about.”

There are still many unknowns. How long do the psychological benefits of good posture last? Why exactly does standing up straight help with stress and emotion? How does it interact with breathing or other parts of the body? “We do not know exactly,” says Broadbent, “but there do seem to be physiological effects on the heart which help to make you feel more alert.”

Whatever the details, standing up tall and taking a deep breath can give you a rush of energy and the confidence to succeed.