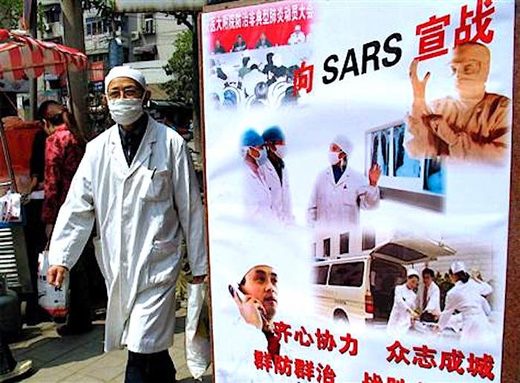 © nbcnews.com
Health worker walks past a SARS billboard in Hefei, the capital of China’s Anhui province.

China is investigating an outbreak of atypical pneumonia that is suspected of being linked to Sars, the flu-like virus that killed hundreds of people a decade ago, state media reported on Tuesday (Dec 31).

A team of experts from the National Health Commission were dispatched on Tuesday to Wuhan, in central China’s Hubei province, and are “currently conducting relevant inspection and verification work”, state broadcaster CCTV reported.

An emergency notification issued on Monday by the Wuhan municipal health committee said hospitals in the city have treated a “successive series of patients with unexplained pneumonia”, without offering details.

Chinese news site The Paper reported 27 cases of viral pneumonia in Wuhan in December, citing unnamed health officials from the city. “Of the 27 cases, seven were critical, the rest were under control, and two patients are expected to be discharged from hospital in near future,” The Paper said.

It is unclear whether all these patients are suspected of having contracted severe acute respiratory syndrome (Sars), a highly contagious respiratory disease.

The emergency notification has urged hospitals to offer treatment and report cases in a “timely manner”.

The World Health Organisation (WHO) criticised China for under-reporting the number of Sars cases following the outbreak in 2003.

The virus, which infected more than 8,000 people around the world, is expected to have originated in the southern Chinese province of Guangdong, according to WHO.

China sacked its then Health Minister Zhang Wenkang for the poor handling of the crisis in 2003, several months after the first case was reported.

WHO announced that China was free of the deadly Sars virus in May 2004.