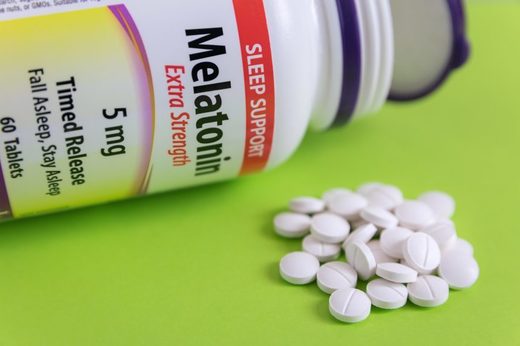 Along with its effects on the endocrine system, melatonin is involved in regulating certain parameters of the cardiovascular system and central nervous system.

In the 60 years since Aaron Lerner and colleagues isolated melatonin, the hormone has been found to affect every system of the body. Although it is primarily synthesized by the pineal gland, melatonin is also produced in peripheral tissues and serves numerous critical physiological functions.1 In mammals, its synthesis in the pineal gland is timed by the suprachiasmatic nucleus via projections to the paraventricular hypothalamic nucleus. Melatonin is most well-known for its role in regulating circadian rhythm and sleep-wake cycles.1

Pineal melatonin production mainly occurs at night and is dependent on darkness, as light blocks its release. In addition to its immediate effects such as sleep induction, reductions in body temperature and blood pressure, induction of insulin resistance and glucose intolerance, and blockade of cortisol secretion, melatonin also leads to prospective effects that manifest throughout the following day.1

“During its daily secretory episode, melatonin coordinates the night adaptive physiology through immediate effects and primes the day adaptive responses through prospective effects that will only appear at daytime, when melatonin is absent,” explained a paper published in Endocrine Reviews.1 These include increased pancreatic sensitivity to glucose and incretins-induced insulin secretion, induction of insulin sensitivity, regulation of blood pressure, and energy balance.1,2

Melatonin “regulates energy metabolism, acting in every step of the energy balance, including energy intake (eating), energy ﬂow to and from storages, and energy expenditure…[and] synchronizes energy metabolism requirements to the daily and annual rhythmic environmental photoperiod,” the review authors wrote.1 As this suggests, the influence of melatonin extends beyond its immediate or short-term effects, given that the “annual history of the daily melatonin secretory episode duration primes the central nervous/endocrine system to the seasons to come.”

In addition, maternal melatonin, the only source of melatonin for the mammalian fetus and newborn until pineal melatonin production begins after birth, programs the future physiology and behavior of the fetus to enable coping with environmental day/night fluctuations. Thus, melatonin is a “biological time-domain molecule acting on the circadian, seasonal, and transgenerational timescales.”1

Along with its effects on the endocrine system, melatonin is involved in regulating certain parameters of the cardiovascular system, including heart rate, blood pressure, and vascular resistance. Research has indicated that melatonin may play a role in cardiovascular events such as ischemia, pulmonary hypertension, and valvular heart diseases.1 The central nervous system (CNS), too, is a major target of melatonin. Melatonin has direct access to the CNS because of its presence in cerebrospinal fluid, and 1 of its most important functions in the CNS is neuroprotection through several mechanisms including antioxidant action.1,3 Some findings suggest a possible correlation between the cerebrospinal fluid melatonin proﬁle/concentration and neurologic disorders such as traumatic brain injury,4 mood disorders,5 and delirium.6 Use of melatonin as an adjuvant therapy in neurodegenerative disorders is also supported, as pineal melatonin production is dramatically reduced in patients with neurologic disorders.1

Given its essential role in these various processes, hypo- or hyperproduction of melatonin and impaired melatonin receptor signaling has been linked to multiple clinical syndromes, as described in the review and briefly summarized here.1

· Circadian displacement. In patients with this putative syndrome, the “magnitude of the daily melatonin peak is usually not altered but the blood melatonin nocturnal curve is displaced in time”; for example, it may extended to the morning or completely displaced to daytime, as observed in the Smith-Magenis syndrome. Treatment should be individualized for the correct timing and dose of melatonin for each patient, taking into consideration the phase-shifting desired effect.

· Inappropriate melatonin receptor-mediated response. These cases are defined by impaired central and peripheral responses of the organs to melatonin, despite adequate melatonin production and timing. This response primarily results from genetic variations of melatonin receptors and leads to chronodisruption and related symptoms, and potentially disorders such as type 2 diabetes, sleep disorders, Graves disease, polycystic ovarian syndrome, and more. Symptoms depend on the affected tissues.

“In summary, given its periodic circadian release driven by the [suprachiasmatic nucleus], the great contrast between night and day circulating concentrations, in addition to the pleiotropic mechanisms of action controlling central and peripheral oscillators, melatonin acts as a powerful chronobiotic hormone and ultimately participates as one of the most important unifying agents that is responsible for the synchrony between the multitude of circadian rhythms at several levels (cell, tissue, organ, and system),” they concluded.

To further discuss the topic of melatonin dysfunction and related treatment implications, Endocrinology Advisor checked in with Jamie Zeitzer, PhD, associate professor of psychiatry and behavioral sciences at Stanford University and sleep specialist at the Stanford Sleep Medicine Center.

Endocrinology Advisor: What are some examples of clinical disorders related to melatonin dysfunction?

Endocrinology Advisor: How is melatonin used to treat these and other disorders?

Endocrinology Advisor: What treatment recommendations would you offer to clinicians regarding therapeutic melatonin use?

Dr Zeitzer: Melatonin is available as both a prescription medication and over-the-counter nutraceutical. Healthy individuals often take melatonin to help with sleep, especially sleep-onset insomnia. In these circumstances, the over-the-counter melatonin is often supraphysiologic in concentration (physiologic dosing is 0.3 mg, and most people take 1-10 mg) and is supplementing normal melatonin concentrations. Few adverse effects, mainly morning grogginess, have been reported at elevated doses of melatonin, and high concentrations of melatonin are thought to be relatively safe. The nutraceutical status of melatonin, however, means that it is not regulated by the United States Food and Drug Administration, and caution should be taken in terms of selecting a respected manufacturer.

Endocrinology Advisor: What should be the focus of future research in this area?

Dr Zeitzer: The mechanism of action of supraphysiologic melatonin administration is unknown, and should be better described so as be used for specific etiologies of sleep disruption.