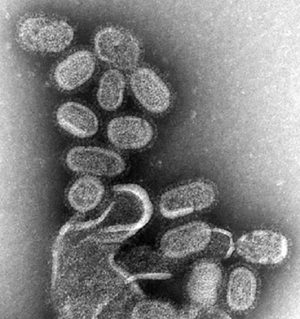 This flu season is shaping up to be one of the worst in decades, according to the United States’ top infectious disease doctor.

Dr. Anthony Fauci, director of the National Institute of Allergies and Infectious Diseases, said while it’s impossible to predict how the flu will play out, the season so far is on track to be as severe as the 2017-2018 flu season, which was the deadliest in more than four decades, according to the US Centers for Disease Control and Prevention.”

The initial indicators indicate this is not going to be a good season — this is going to be a bad season,” Fauci said. So far this flu season, at least 2,900 people in the US are estimated to have died of the flu, according to data released Friday by the CDC. That’s 800 more deaths than estimated the previous week.

Flu cases and hospitalizations because of the flu have also risen sharply since the season began in October. CDC estimates there have been at least 6.4 million flu illnesses and 55,000 hospitalizations.

Fauci said it’s possible this steep rise in flu activity could reverse itself soon, in which case the season wouldn’t end up being so severe.

“Hopefully this turns around and comes down, but if it continues on the trajectory it’s on, it’s not going to be good,” he said.

Fauci pointed out a CDC graph to compare the current flu season to two of the most severe in recent decades. In the graph below, designed by CNN based on the CDC data, the red line indicates flu activity from September 29 through December 28. The other lines show the 2014-2015 and 2017-2018 flu seasons, two of the worst in recent decades. 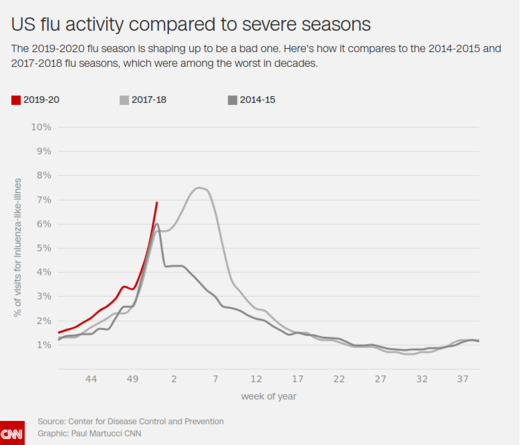 So far this season, flu activity has surpassed the peak for 2014-2015, and is climbing toward the peak for the particularly deadly 2017-2018 season.

The only thing predictable about flu is that it’s unpredictable.”This season so far has been particularly deadly for children, with 27 deaths reported through December 28. That’s the highest number of deaths at this point in the season since the CDC started keeping track 17 years ago.

One reason flu has been so severe for children this season is that they’re particularly susceptible to influenza B, this season’s dominant strain. Compared with flu A, flu B is relatively stable and doesn’t change as much from year to year, so many adults have immunity to it from infections earlier in life.

Even though the flu season is well underway, the worst could still be ahead, so the CDC advises everyone older than 6 months to get a flu shot.