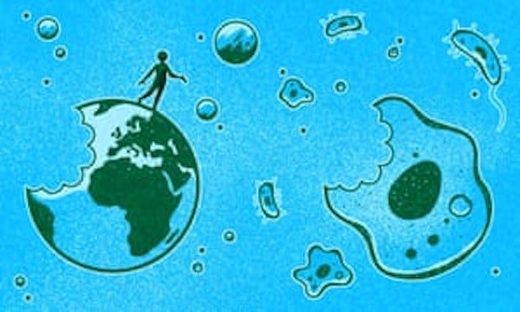 In a hall filled to the rafters with agroecological and regenerative farmers, a man approaches the podium.

Most already know what he’s going to say, but they’ve come to listen anyway — only half believing that what they’ve seen and heard about his assault on farming and farmers could be accurate.

George Monbiot is a journalist and author specializing in environmental issues. His work is read all over the world. You could be forgiven for thinking that he might be on the side of agroecological farming. But increasingly he isn’t. And if there was ever any doubt of this, Monbiot’s performance at the UK’s prestigious Oxford Real Farming Conference, following the debut of his TV documentary, Apocalypse Cow, was enough to remove any last shred of that doubt.

In his documentary, Monbiot claims livestock are killing the planet. Cows are simply “carbon-releasing machines” that take up far too much land that could otherwise be “rewilded” to conserve nature, promote carbon storage and become a home to long absent apex predators like wolves.

The pre-publicity for his TV program promised a “radical takedown of food farming.”

It was more fantastical than radical. And it was certainly contentious.

In place of farm animals, Monbiot wants us to eat lab-grown meat and “vat-etarian” food powders produced by specialized bacteria brewed up in giant vats.

We can still have fruits and vegetables he says. They could even be organic. But he doesn’t really address the complex realities of scale, yield and market value in low-input/low- yielding systems versus high-input/high-yielding ones.

Nor does he take an ethical stand on high-input monocultures like cereals, which are the bigger staples of “plant-based” diets.

There wasn’t much mention of health, either. But that’s par for the course in the techno-food world.

Doing his ‘duty’ for the planet

But back to Oxford.

The farmers at the conference were respectful and reasonably attentive as Monbiot harangued them. They listened as he told them that they had all the foresight of typewriter manufacturers in the 1970s. They listened as he diminished the contribution of agroecological livestock farming to a more sustainable world.

Eventually a few boos broke out — and later still he was roundly criticized by the farming press.

The wonder was that he wasn’t chased down the street by an angry mob with pitchforks.

To thunderous applause, another fellow panelist, author and award-winning food writer Joanna Blythman, demanded Monbiot apologize to everyone in the room for implying that he was the only one who cared about climate change.

The next day he tweeted in a disingenuous way: “As expected I was booed to the rafters at the #ORFC2020 (Oxford Real Farming Conference). But I felt it was my duty to turn up and explain what I believe climate breakdown will do to farming and why #farmfree foods are likely to be essential.”

I’ve been mostly supportive of Monbiot over the years. His provocateur style can be effective and his work on corporate control and dark money is usually revealing.

But in recent years, as he’s turned his attention to food and farming, he has, for me, become less convincing.

In truth, Monbiot has a history of grasping at techno solutions when the issues get complex. In 2011, he penned a comment entitled “Why Fukushima Made Me Stop Worrying and Love Nuclear Power” in which he announced his support for nuclear as a clean, green energy.

Monbiot’s vegan journey has been a little less straightforward. In 2002, he claimed that veganism was the only ethical solution to the social injustice of not having enough food for all. But in 2010, after reading the excellent book, Meat – A Benign Extravagance, by Simon Fairlie, editor of the Land Magazine, he proclaimed “I was wrong about veganism.”

In 2016, he swung back the other way, explaining that he’d converted to veganism to reduce his personal impact on the world, a view he restated in 2018.

Now, in 2020, he wants us to know that lab-grown meat will save the planet by destroying farming.

It all makes good copy, and Monbiot is a passionate writer and speaker. But how seriously should we take this?

On the one hand Apocalypse Cow was a very personal criticism of animal foods and animal agriculture. On the other it was a substantial promotion for the concept of rewilding — and it’s worth noting that Monbiot, in addition to being a vegan, is also involved with several rewilding projects in the UK.

Indeed at the end of the film Monbiot agrees to cull a deer in the interest of saving the biodiversity of the Scottish Highlands. He weeps copiously after the kill and then says he hopes that one day reintroduced wolves will do the job for him.

The UK’s Channel 4, which aired the program, also has an interest to promote. The company has recently made a seven-figure investment in a vegan brand called the Meatless Farm Company.

So was Apocalypse Cow — and the new reality series that preceded it, Meat the Family (where families are given farm animals as pets and then challenged to slaughter and eat them) — legitimate programming? Or advertising?

Many have responded to Monbiot by trying to marshal a bunch of “killer” facts to prove him wrong. My advice is aim higher.

A more constructive activity would be to try and understand the landscape from which his claims have emerged, and who else is paying attention to them, and challenge that instead.

The bigger context is important here. We exist in world of aggressive tech start-ups and prophesying tech think-tanks like RethinkX, whose recent report, “Rethinking Food and Agriculture 2020-2030 – The Second Domestication of Plants and Animals, the Disruption of the Cow, and the Collapse of Industrial Livestock Farming,” suggests that new technology and a radical new business model that envisions “food-as-software” are driving the most consequential disruption of food and agriculture in 10,000 years.

By 2030, according to the report, the dairy and cattle industries will have collapsed. Meat and dairy will be replaced by the products of “precision fermentation” which will produce higher-quality protein cheaply and efficiently. The rest of the livestock industry, it said, will eventually suffer a similar fate.

By increasing farming’s focus on efficiency and profitability, the farmer, as the least profitable part of the chain, could probably be cut out of the equation. Instead of farmers, modern food production will be overseen by “fermentation farmers, bioengineers, protein engineers, metabolic engineers, cell biologists, computer scientists, IT workers, food scientists and designers, nutritionists, and other similar professions”

This kind of food production is also sometimes called the “dark food chain” because it does not rely on sunlight/photosynthesis.

Such ideas come straight out the playbook of a number of tech companies. They feature prominently, for example, in the promotional pitch for Solar, a Finnish tech company that wants us to be “free from agriculture,” and in the program, Monbiot travels to Finland to sample Solar’s as yet unlicensed novel food, Solein, for himself.

Solar is not the only “food from air” company. Air Protein is another. Calysta is yet another. Each uses the same basic technology to create a highly processed all-purpose high-protein powder. The starting material is a type of bacteria that feeds mostly off gases like hydrogen, methane and CO2 and then poops out a substance that contains fat, carbohydrates and protein intended for human and animal consumption.

Far from being “new,” the technology was first described by NASA in the 1960s — which prompts the question: if it works so well why hasn’t it been further developed before now?

Is there something in this technology? Maybe, maybe not. Important questions about lifecycle analyses are only just beginning to be asked because, as ever, vagueness about the process is key to a good story.

The massive energy use needed to split water into its hydrogen and oxygen components is rarely mentioned (in fact, at the moment most of the world’s hydrogen comes from fossil fuels). Many other questions about this process remain unanswered. What becomes of the (highly flammable) oxygen gas that is a by-product of the process? What about the use of water for making and processing the final product? And the crop-based feedstocks needed for the bacteria? And the issue of waste removal?

It’s not clear if the organisms being used by any of these companies are the products of synthetic biology, which is just another form of genetic engineering. But it is a fair bet that if it they aren’t now eventually they will be — in the name of improved efficiency. Novel genetically engineered bacteria could bring their own risks should they ever escape the confines of the factory.

In addition, there isn’t any realistic assessment of just how large these factories and their support systems need to be nor how many we would need to produce enough to “feed the world.”

Monbiot claims that the land-efficiency of food from air is 20,000 times greater than for livestock. But it turns out that figure only applies to the land needed for the factories. If the process were powered by solar farms, for example, it would be only 10 times more land efficient than farming soya.

It should be noted also that while very early experiments showed that rats did not seem to suffer from consuming bacterial proteins, humans did not react well. Gastrointestinal upsets, headaches, weakness and skin rash were linked to eating protein derived from hydrogen-munching Hydrogenomonas eutropha.

A more recent 28-day feeding study with rats using the same bacterial protein (now called Cupriavidus necator H16) suggested poor growth, kidney stones and changes in blood biochemistry. As with all novel foods, a month-long feeding trial is not enough to draw sensible conclusions but it is, arguably, enough to suggest more information is needed.

The assumptions, the knowledge gaps, the “what if’s” and the “yes, buts” are endless and yet if agroecological farmers want to know what is stopping greater interest and investment in their own work they need look no further than the claims companies like these make.

Governments find it difficult to square their promises of vast economic growth with their promises of sustainability and new “green deals.” Techno-food is seen by many as a way to do both since it capitalizes on the international marketplace known as the “knowledge economy” while producing something approximating food at the end of the process.

We can look at these grim techno-visions and tell ourselves they aren’t real — they certainly have an aura of unreality about them. But these reductionist scenarios are attractive to citizens, businesses, politicians and policymakers who yearn for simple solutions. They have and are gaining some prominence, because the role of food and farming in a sustainable world is harder to pin down, more complex and less black and white than ever before.

A desire for easy answers is also being energized by a global panic about how much time we do or don’t have left to deal with climate collapse and declining finite resources.

Monbiot’s “vision” has been criticized as a 1% solution, great for businesses if they can pull it off, but less great for the majority who want food that comes from living ecology rather than sterile technology.

In reality, it’s unlikely that these food disrupters will be up and running and making a substantial contribution to sustainability and food security within the next 10 years — a timeframe that apocalypse boosters like Monbiot say is crucial for implementing change.

Contrast this with the principles of agroecological and regenerative farming which can be applied right now, and are being applied right now, to make a difference. These are the most practical and effective examples of low-carbon, environmentally friendly, soil-supporting, nutrition-boosting, health- and welfare-promoting farming we have.

Our priorities should be investing in and multiplying these options to feed the human population instead of feeding our too-often misguided neophilia.

Pat Thomas is a journalist, author and campaigner specializing in food, environment and health. See more on her website. To keep up with Organic Consumers Association (OCA) news and alerts, sign up for our newsletter.