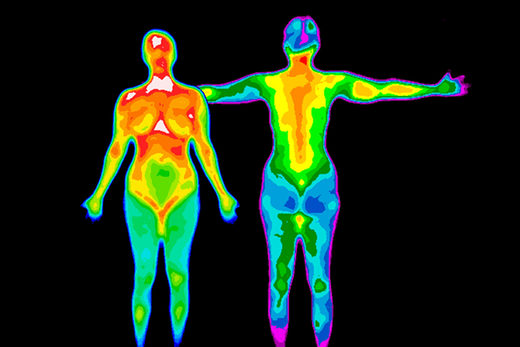 It’s a number everybody knows by heart — our bodies are supposed to be an average 37°C. But that number may be outdated, according to a new analysis of body temperature records going back to 1860. The study suggests the body temperature of the average U.S. man has dropped by 0.6°C since the Civil War, KQED reports. (A similar drop was found in women.) Other studies had already established these newer, lower baselines, blaming faulty thermometers for the discrepancy.

But the new research suggests the original number — established in the 1850s — was correct, and that body temperature has declined gradually ever since. That drop may be a product of lower overall levels of inflammation, thanks to antibiotics, vaccines, and improved water quality, the authors report this week in eLife. Modern technologies, such as central heating and air conditioning, could also help explain the trend.

Comment: It’s possible that this drop from what was the norm is not a good thing, after all, the human body raises its temperature to kill off viruses so does this mean people will be more susceptible and less able to fight them off? What seems clear is that even with all the modern conveniences and medical advances people seem to be unhealthier than ever before – even if they may be living longer: Also check out SOTT radio’s: The Health & Wellness Show: The benefits of cold adaptation