Cymascopic images of the ‘song’ of a healthy cell and cancer

A study published in the Water Journal describes a novel method for comparing the sounds of cancer cells and healthy cells. The method may lead to the development of an Artificial Intelligence-supported surgical procedure for the removal of tumors. A form of the technology also holds promise for early cancer detection

The discovery that cells create sound, as a feature of their natural metabolic function, was made by Professor James Gimzewski of UCLA, in 2002. Using an Atomic Force Microscope, he and his colleague, Dr. Andrew Pelling, were able to listen to the sounds of cells for the first time and, surprisingly, they found that the sounds lie in the audible range. In other words, if our ears were sensitive enough we would be able to hear the sounds of our own cells. (Perhaps it is fortunate that we cannot.) Professor Gimzewski named their new approach to cell biology, “sonocytology,” combining “sono” (sound) with “cytology'” (the study of cells). In Dr. Pelling’s article “The Singing Cell”1 he says, “Observing cells in different situations, [for example] cells under stress, generates different sounds. In fact the state of the cell, if it is healthy or cancerous, can be distinguished by listening to its sound. In future we hope to bring our research in sonocytology to the point at which it can be integrated in medical disciplines such as cancer research. Listening to cells would allow a fast diagnosis of cancer without the use of drugs or surgery. Sonocytology might also make cancer detection possible before a tumor forms.”

However, Atomic Force Microscopy2 is technically challenging, requiring an acoustically isolated room and many other demanding precautions, rendering it less attractive than other methods of listening in to cell sounds. In the study (see below for link) by Professor Sungchul Ji and Beum Park of Rutgers University, and John Stuart Reid of CymaScope.com, the researchers worked with sounds from cells that were derived from Raman Spectroscopy3. Named after its discoverer, the Indian physicist, C.V. Raman4, it is a method in which a laser probe strikes not one cell but typically thousands, the light being modulated by the movements of a myriad of cell membranes. The fact that many cells influence the laser beam means that the Raman system provides an accessible method of cell sound detection. As the laser light reflects from the tissue sample it carries with it tiny fluctuations that are collected by an electronic detector and are simultaneously made audible by a computer, therefore rendering the cell sounds audible as a diagnostic tool.

Dr. Ryan Stables5 of Birmingham University, UK, supplied the Raman-derived sounds of cancer cells and healthy cells from brain tissue for the study. Neurosurgeons face a significant challenge in the removal of tumors from brain tissue, since the margins of the cancerous tissue are often difficult to identify. A device that could support the surgeon to accurately identify the tumor margins would be highly beneficial. In the paper published In the Water Journal titled, “Imaging Cancer and Healthy Cell Sounds in Water by CymaScope, followed by Quantitative Analysis by Planck-Shannon Classifier” https://dx.doi.org/10.14294/WATER.2019.6 first steps are discussed in creating a real time system based on visual data provided by a digital CymaScope6, a new type of instrument that uses cymatic (visible sound) technology. Sound is imprinted onto medical grade water, rather like a fingerprint on glass, leaving a visual signature of the sound. The title image shows a typical cymascopic image of a healthy cell alongside that of a cancerous cell, revealing that the cacophonous sounds of cancer cells typically create skewed, ugly imagery while the harmonious sounds of healthy cells create symmetrical, beautiful imagery. 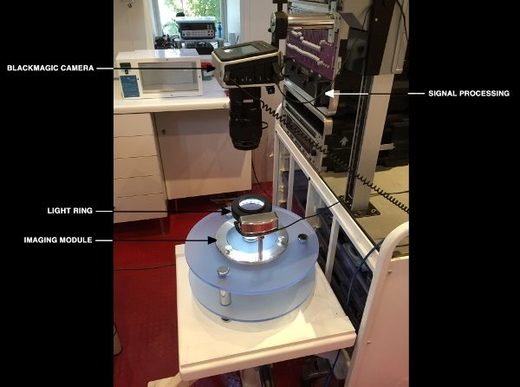 The digital CymaScope in the foreground, with signal processing at top right

In the system proposed in the paper and published in the Water Journal, signals originating from a Raman laser probe, during a brain surgery procedure, would provide audio signals to the digital CymaScope, rendering them visible. The visual imagery would be displayed to the surgeon via specially adapted eyewear with video display, augmented by a digital number derived in real time via software calculations, appearing in the eyewear. The number would be generated utilizing Professor Ji’s mathematical formula, described in the paper, that would analyze the imagery, thereby supporting the surgeon’s decision where to make the incision. 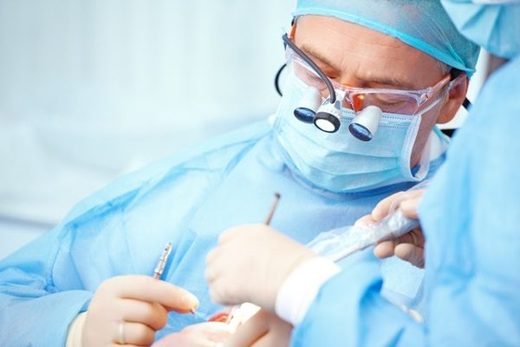 In addition to supporting surgeons, another important potential use arises from this method of differentiating between cancer cells and healthy cells: early detection of cancer. Currently, the microscopic study of diseased tissue and diagnosis of cancer and other diseases requires histopathological examination of tissue samples. Only licensed histopathologists7 are allowed to make a diagnosis based on a patient’s tissue sample, yet there are too few licensed histologists in practice, which can cause delays in a patient’s diagnosis. If histopathology could be automated, it would permit a proficient technician to obtain a read-out and discover whether a given sample is pre-cancerous, cancerous, or healthy, and treatment could be more promptly prescribed or good news given.

The use of sound in medical modalities is growing each year8, 9, 10,11, 12, 13, 14,, both for therapeutic and diagnostic applications and this drug-free approach to medicine is finding welcome support among many physicians and in hospitals worldwide. In keeping with the title of this article, “harmony becomes cacophony when healthy cells become cancerous”, sound has a great future in medicine, a voice that deserves to be shouted out for all to hear.

John Stuart Reid is an English acoustic-physics researcher and inventor of the CymaScope, an instrument that makes sound visible. He has studied the world of sound for over 40 years and is one of only two men to conduct an acoustics study of the Great Pyramid. His primary interests are developing cymatics into a new science of visible sound and developing applications for the CymaScope, including the CymaScope app, which reveals cymatic energy patterns in real time from voice or music. He authored the first chapter to approach cymatics from a scientific perspective in “The Mereon Matrix”, published by Elsevier. He is engaged in pioneering research to decipher dolphin language and co-authored a paper with SpeakDolphin.com titled, “A Phenomenon Discovered while Imaging Dolphin Echolocation Sounds” in the Journal of Marine Science. He lectures at conferences in Europe and the USA.