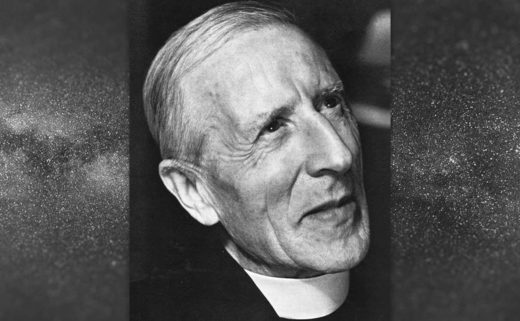 Why should advocates of intelligent design care about a French Jesuit priest who died more than 60 years ago? Pierre Teilhard de Chardin (1881-1955) along with being a Jesuit priest was also a geologist and paleontologist who made several trips to China to participate in geological and paleontological work (he was part of the team that discovered Piltdown Man, later revealed to be a hoax). But Teilhard is best known for his book The Phenomenon of Man, published in French in the 1930s and in English in 1955. In this book Teilhard lays out a vision for the evolutionary process that is at odds with the established scientific view but is consistent with his own religious convictions.

Teilhard argued that the science of his time had a truncated view of evolution. Scientists studied the evolutionary process as if it were a movie playing on a screen in front of them with the scientists themselves as mere passive observers. Teilhard thought that evolution needed to be viewed from the inside, viewing humans not only as observers of evolution but also as its products. As such, Teilhard conceived evolution as occurring on four levels, only two of which were acknowledged by establishment scientists.

His Most Controversial Idea

Having fully accounted for the evolutionary process, Teilhard went on to articulate his most controversial idea. He argued that over time, human minds would eventually form a web of reflective consciousness enveloping the Earth (what would he think of the Internet?!). He called this the noosphere. In time, the noosphere would reach an omega point where consciousness would completely fuse with the God who created it. Teilhard’s view of evolution was thus highly teleological. The evolutionary process existed for the purpose of creating beings with the ability of reflective thought so that they could commune with their Creator. No Darwinian contingency here!

Not surprisingly, most Darwinians howled with derision at Teilhard. In response to The Phenomenon of Man, Nobel Laureate Peter Medawar published one of the most devastating book reviews ever written. Medawar called Teilhard’s book “nonsense, tricked out with a variety of metaphysical conceits, and its author can be excused of dishonesty only on the grounds that before deceiving others he has taken great pains to deceive himself.” For Medawar, reading Phenomenon brought on feelings of “real distress, even despair.” Despite this, many philosophers and theologians found Teilhard’s book of great interest. But according to arch-Darwinian Daniel Dennett, the esteem with which non-scientists held the book is nothing more than a testimony to their “depth of loathing of Darwin’s dangerous idea, a loathing so great that it will excuse any illogicality and tolerate any opacity in what purports to be an argument.” The Darwinian reaction to Teilhard’s explicit evolutionary theology is of course to be expected. What we don’t expect is to find that this disdain was not shared universally within the Darwinian establishment.

Enter Theodosius Dobzhansky, perhaps the most important figure in the history of evolutionary theory after Darwin. In his oft-cited essay “Nothing in Biology Makes Sense Except in the Light of Evolution,” Dobzhansky unexpectedly calls Teilhard “one of the great thinkers of our age.” As a man of deep Christian faith himself, Dobzhansky clearly resonated with Teilhard’s attempt to create a synthesis between evolution and religious thought. In fact, Dobzhansky appears to have been so taken with Teilhard’s work that he served for a year as president of the North American Teilhard Society (1969). Of course, we will never learn from the textbooks that a figure as central to the modern evolutionary synthesis as Dobzhansky seemed to embrace an explicitly teleological and even theological understanding of evolution. I suppose Dobzhansky was deceived (according to Medawar) or prone to illogicality (according to Dennett)!

Of course, neither Teilhard nor Dobzhansky appears to have made an explicit design argument. They would be better categorized as theistic evolutionists. For Dobzhansky this is confirmed when in his previously cited essay he states, “There is, of course, nothing conscious or intentional in the action of natural selection.” Here Dobzhansky adheres to the standard Darwinian story. Yet just a few lines later he notes humans’ ability to make conscious, intentional decisions, and concludes, “This is why the species Homo sapiens is the apex of evolution.” The incompatibility between these two statements seems not to have occurred to Dobzhansky. Clearly, a process with no direction or larger purpose by definition has no apex. His attempt to hold to both an orthodox Darwinian viewpoint and an orthodox Christian viewpoint simultaneously dissolves into incoherence. Theistic evolutionary schemes seem to be a logical dead end.

While Pierre Teilhard de Chardin may not have been a forerunner of intelligent design thinking per se, the significance of his pointing out the incomplete nature of the evolutionary theory of his day should not be underestimated. As Thomas Nagel would argue today, any theory of evolution that excludes the origin of mind and consciousness from consideration is at best half a theory. Teilhard noticed this weakness of Darwinian evolutionary theory nearly a century ago, and at least one very prominent Darwinian may well have agreed, even if he never admitted it in public.

Dr. Shedinger is a Professor of Religion at Luther College in Decorah, Iowa. He is the author of a recent book critiquing Darwinian triumphalism, The Mystery of Evolutionary Mechanisms: Darwinian Biology’s Grand Narrative of Triumph and the Subversion of Religion.