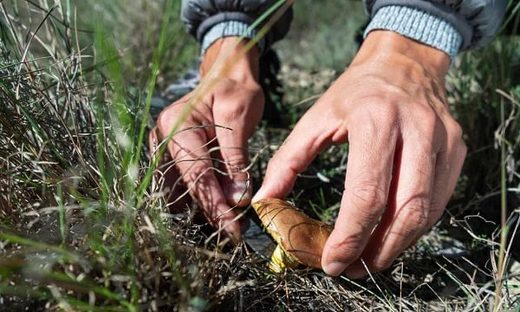 © Juan Moyano/Alamy Stock Photo
Rachel Cooke: ‘How on earth did a predilection I always thought of as rather odd suddenly become so hip?’

In her new book, The Way Through the Woods, the Norwegian-Malaysian writer Long Litt Woon describes the various sensory pleasures that are involved in the gathering of mushrooms: the beguiling way they yield to the human hand; their different textures, whether velvety or hairy, rubbery or powdery; even the noises they make (some pop when snapped). Above all, there are the different ways that they smell. The prince mushroom comes with top notes of marzipan. The wood blewit brings to mind burnt rubber. The common stinkhorn emits the sweet aroma of rotting flesh.

Smell plays a vital role in a mushroom’s popularity as food – though as Loon notes, this isn’t always straightforward. Different cultures favour different smells. When the matsutake or pine mushroom was discovered by a Norwegian mycologist in 1905, it was given the name Tricholoma nauseosa on the grounds that its odour was unpleasant (the American mycologist David Arora has since described it as being reminiscent of dirty socks). In Japan, however, where those who pick it wear white gloves and there are poems describing its virtues that date from 759 BC, it is considered to smell divine – which is why, in 1999, when it was discovered that T. nauseosa and the Japanese pine mushroom are the same species, people there lobbied for the right to rename it T. matsutake (the Japanese for pine mushroom).

Long’s book, in which she recounts how mycology helped her to recover from the death of her husband, could hardly be better timed. In the UK, we’re just coming, thanks to some well-timed rain, to the end of the best mushrooming season in years. Where the British were once distinctly nervous of foraging for fungi, now everyone’s signing up for courses and merrily buying field guides. The other day I saw a newspaper headline that read: “THREE TO PICK NOW.” Beside it was a picture of a parasol mushroom. It was as if it was sale time, and the fungus was a Burberry trench or a pair of shoes by Jimmy Choo.

All this is great, of course. Even as we pursue our wretched Brexit, it seems that some of us are becoming more European, in this way at least. But I have to admit to feeling proprietorial about it, too: like a teenager whose favourite obscure band has just had a No 1. I look at the wallpaper on my phone – a picture of an enormous fly agaric that I found on Stanton Moor in Derbyshire – and wonder if I should change it. How on earth did a predilection I always thought of as rather odd suddenly become so hip?

When I was little, fly agaric, the toadstool (red with white spots) most beloved of gnomes, was a name as familiar to me as that of Basil Brush or John Noakes. My father was a mycologist – at the weekend, as if his professional status was somehow in doubt, he used to wear a T-shirt with the word “mycologist” on it – and thanks to this, mushrooms were part of the landscape of my childhood. Giant puffballs and penny buns, shaggy inkcaps and beefsteaks: how I loved these names, and how I loved to find them in the wild. If it was boring that they, unlike fly agaric, were edible – like most children, I was entranced by the idea that a mushroom could kill you – it was also magical, pushing back the grass or bracken and finding them there: miniature standing stones that you could crush with a single foot.

People talk, in these fractious times, about mindfulness. They wonder how to shut out the din, and get back to the important, elemental things in life. Mushrooms, here only fleetingly and easily damaged (though not the bit of them that hides below ground), do this effortlessly – and perhaps this is one reason for the popularity of foraging. On the hunt, you will be in a field or, more likely, a wood, which is a balm in itself. But for success, you will need both to concentrate and to be in possession, at the crucial moment, of a great and careful gentleness. Suddenly, you will see what you are looking for and, after a brief moment of what feels like resistance, it will be yours: gold that may be taken home and eaten on toast.