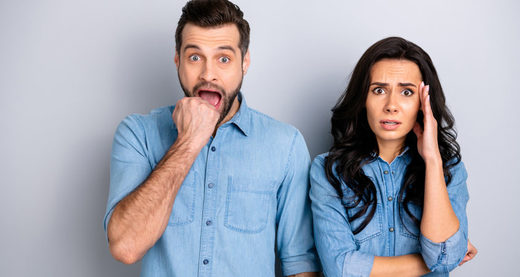 There are lots of differences between those who express opposing political affiliations — and they may not just be ideological. Liberals and conservatives have different shopping habits, for instance, with one series of studies finding that liberals preferred products that made them feel unique, whilst conservatives picked brands that made them feel better than others. They even view health risks differently when they’re choosing what to eat.

But could there also be physiological differences between liberals and conservatives? Some evidence seems to suggest this might be the case, though as we reported earlier this month past findings, such as differences in physiological responses to fear, may not be as solid as previously thought. However, new research in Psychological Science has found that people of different political affiliations may differ in another way: where in the body they feel emotions relating to moral concerns.

It’s well established that we feel particular emotions in the body — butterflies in the stomach when we’re nervous or excited, a racing pulse or flushed cheeks when we get angry. But these physical reactions are not uniform: where one person might feel disappointment in their chest, another may feel it in their stomach.

To examine how political ideology impacts such physiological differences, Mohammad Atari and a team from the University of Southern California asked 596 participants to read a piece of writing about a violation of a particular moral foundation. Participants were assigned to either read about a violation of morals relating to care, fairness, loyalty, authority, or purity. For example, one such vignette in the care condition read “You see a woman clearly avoiding sitting next to an obese woman on the bus” or, for the purity condition, the rather more surreal statement “You see an employee at a morgue eating a pepperoni pizza off of a dead body”.

Participants were also given a political orientation score based on how they rated their affiliation with the Republican or Democratic parties as well as their self-reported conservatism on a scale from “very liberal” to “very conservative”.

The results from this, and a second study aimed at replicating findings, suggest that liberals and conservatives do indeed feel moral outrage in different areas of their bodies — though in fairly concentrated areas. Liberals, for example, appeared to feel violations of “purity” in their groin area, whilst conservatives felt it in their stomach and heads; liberals were also more likely than conservatives to feel violations of “care” in their heart. This image shows the maps for each kind of moral concern: 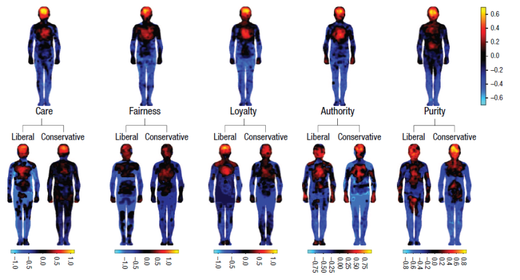 These differences may not be as strong as they appear at first glance, however: activation was not as disparate as it might have been. Violations of “care” were felt largely in the head for both groups, “authority” in the head and chest for both, and “loyalty” in the same areas, for instance.

The new study also comes after recent research that has seemed to debunk many claims of physiological differences between liberals and conservatives: one study found that conservatives don’t in fact experience any more disgust than liberals, while another found that physiological differences in fear response between those with different ideologies had been overstated.

This work doesn’t quite claim the opposite — as the authors note, “there are more commonalities than differences”. And it also relies on people’s self-reported perceptions, rather than actual measures of physiological change in the body. But those differences could be significant, and may be worth a further, closer look.